a frozen icarus
by Douglas Messerli

I’d already reviewed the Carl Theodor Dreyer vision of Herman Bang’s 1902 novel Mikaël before I watched the earlier 1916 silent film by Mauritz Stiller, Vingarne (The Wings) based on the same work.
Stiller’s film, much of it now lost (the film was not even discussed in my usually authoritative World Film Directors volume nor in David Thomson’s The New Biographical Dictionary of Film) seems much more tame, basically unable to capture the relationship between gay sculptor, Claude Zoret (Egil Eide) and his beautiful, newly discovered model,  (Lars Hanson), who is the subject for the Master’s greatest work of art, an image of Icarus—hence the film’s title, The Wings. 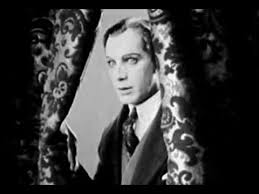 In what we have left of Stiller’s version of Bang’s work, we observe little of the relationship between Zoret and his model, the reconstructed film announcing only that Zoret lovingly adopted the young man, thus making him a father to his own Icarus.
Although we certainly witness the artist’s attraction to Mikaël, we observe little of mutual response from the young son since the passages we have left of this film almost immediately immerses us into the world of the a beautiful countess (Lili Bech), whom Zoret paints while she, in turn, attempts to entice the handsome Mikaël into a relationship.
Predictably, she succeeds, demanding that he not only spend all of his time with her, but that they live a wild and expensive life that her lover can only afford through regular payments from his benefactor-father.
In Stiller’s reimagining of the Bang novel, Zoret becomes a rather pitiable figure that reminds one, a bit, of the professor of The Blue Angel, desperately in love with Marlene Dietrich. 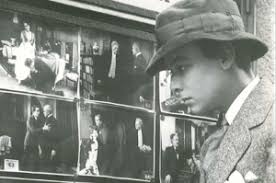 In short, the obvious homosexuality of the central couple, perhaps due to the film’s lost sequences, is given short shrift, and thus shifts the film into a story instead about an young man who displays great ingratitude to the lover who has made his image famous, leading, ultimately, to Zoret’s death in a downpour at the base of the statue of Mikaël he has created out of his intense love for the boy.
In the Dreyer version the boy at least feels some feelings of repentance, while in Stiller’s work he sells the work in order to feed his and the countesses’ desires. If Stiller might wish we sympathize with the artist, the lack of almost any feelings for the Master from Mikaël does not permit us much sympathy for the narrative’s point of view.
Perhaps, in the earlier lost scenes of this silent work, we might have become aware of true feelings between the two; but as it stands, this Icarus seems less burned by the sun than simply bound by the bronze (and plaster) into which his image was cast.
This early “gay” film has little sympathy, I would argue, for the relationship it might have portrayed. The 70 minutes which remain seem more like gossip than a film revealing any male/male connection. The young would-be Icarus is locked into the metal of a foolish relationship with a woman of pleasure, without anything else that she might possibly offer.
Stiller would prove as a more reliable director of heterosexual romps and in his discovery of Greta Garbo.