Djibril Diop Mambéty | Touki Bouki (The Journey of the Hyenas)

voyage to nowhere
by Douglas Messerli

Djibril Diop Mambéty Touki Bouki (The Journey of the Hyenas) / 1973

Djibril Diop Mambéty's 1973 Senegalese film in the Wolof language, Touki Bouki (sometimes translated into English as The Journey of the Hyenas) is a film influenced, in part, by Godard’s Breathless and Pierrot le Fou as well as Truffaut’s The 400 Blows. 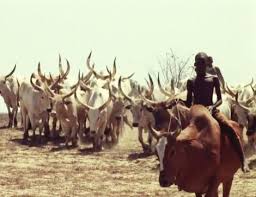 The loving couple of this film, Mory (Magaye Niang) and Anta (Mareme Niang) are desperate to leave their beloved Senegal not just because of their personal poverty—Mory owing debts to nearly everyone—but because of the cruelty they constantly witness in that country’s treatment of its long-horned bulls and goats, incapsulated in the near-orgiastic blood baths of the butchers, in particular Aunt Oumy (Aminata Fall).
They proceed on a somewhat ridiculous series of robbery sprees to raise enough money to catch a ship out to France, where Mory is certain that they will be able to get jobs and return as wealthy figures, or at least revered ones for just having been able to escape. In fact, a bit like Pierrot le Fou this movie is an imaginary road trip of escape. Afterall, Mory has opened a sacred package of gris-gris, removing what he perceives as a lucky charm. 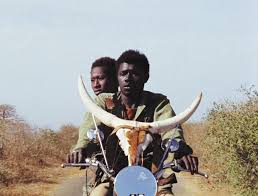 Their attempts to raise money are not only absurd but often transition them to near surrealistic worlds that border on sexual abuse and near sadism.
When Mory attempts to outwit a local card shark by betting a large sum of money against the dealer’s tricks, he, of course loses, and when unable to pay is forced to go on the run, finally being slowed down by a gun-totting policemen, who stops him, not for his immediate crime, but closely looking him over, asking simply for the handsome Mory to provide him with a cigarette.
This early into the film, we already sense a kind of homosexual insinuation here, a kind of public flirting by a man of power with the young would-be lover of Anta, whose sexual relationships with him are discretely—and somewhat comically—portrayed with his lover’s hands on his motorcycle rather than portraying any actual sexual interactions. Like Jean Seaborg, her hair is short-cropped. But this is not precisely the same as in Godard’s great work, but a bit more like Fassbinder’s early works.
The second failed robbery takes place at a local, well attended, Lebu tribal wrestling match, its male participants stripped down to what sumo wrestlers wear, mawashi—in this case even a bit less than those loin-cloths. Is it any wonder that the central attendees of this affair a most women, attired in their best robes?
Mory and Anta observe the delivery of the large boxes wherein the tribal organizers keep their profits, which are carefully cordoned off and guarded a policeman—coincidentally by the same policeman who stopped Mory the previous day. The self-assured Mory now knows he and Anta will easily be able to steal the wealthy proceeds of this Coliseum-like event. But a question remains regarding which the two boxes actually contains the money. Anta suggests the small box on top, while Mory is certain it is the lower and larger blue case, protected by the smaller green one on top.
We never know quite how they pry the lower box away from the attending policeman, but the trip by taxi that the beautiful Anta takes to meet up with Mory is perhaps one of the most hilarious and creepy rides ever presented on film. Anta takes the poor taximan through some of the wealthiest areas of Dakar, before forcing him to venture into a territory of what appears to be abandoned European-built bunkers by the sea. The taxi driver is absolutely confused and terrified by where he is being taken to Anta’s so-called “summer mansion.” He clearly knows, with the large blue case on the top of his taxi, that something is amiss.
Nonetheless, he obediently carries the large, almost unbearable, blue case down numerous steps (reminding one somewhat of Laurel and Hardy’s impossible passage downstairs with a piano) and attempts to deliver it to the location that Anta, bit by bit, steers him to. Finally, and quite expectedly he stumbles, opening up the trunk to reveal no money within, but a skeleton.
Mory, speeding by motorcycle to the rocky terrain, has an accident, and the still-running cycle is discovered by a tree-bound kind of wild-child, which he later discovers how to operate, showing up in the streets of Dakar.
Throughout this entire film we observe the waves of the sea, both washing away the suffering of the Senegal people, but also alluring them to the sandy beaches and what may lay just beyond. In a scene in which Mory and Anta seem almost encrusted by beach sand, the good-looking young man suddenly comes up with another idea to visit a wealthy friend who lives in a villa not far from where they are stranded. 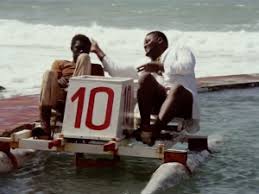 Mory’s acquaintance, it turns out, is Charlie (Ousseynou Diop), a gay man lounging with other boys in his large pool. When he sees Mory, he immediately dismisses not only his current devotee, but Anta as well, sending her off to the small women’s circle. “Who’s the ugly chick?” he latter challenges Mory.
What immediately becomes clear is that Mory has visited Charlie—who massages, showers with, and likely has sex with his “boys” and other male visitors—several times. And after a short foot-pedaled boat ride around his pool, quickly invites Mory in, while he takes a shower, attempting to entice the young man into his now warm bathroom. What might have once seemed an exciting Romeo and Juliet romance is suddenly turned on its head, as we realize that Mory, in this largely Muslim country, has long been involved—perhaps for financial remuneration—in a homosexual relationship. The shock of recognition ignites the film with a completely new overlay of what has been happening all along. 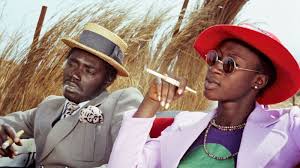 Mory steals Charlie’s entire wardrobe, and with Anta returns to Dakar in grand attire, as if the two, indeed, had just returned, as in their dreams, from France. Having probably sold several of Charlie’s garments, they now have money, displaying it openly to their city friends. They can now purchase tickets on the ship to whisk them away to their magical kingdom. And, dressed in their new “drag” costumes, they appear to be a new kind of royalty, destined to achieve their impossible dreams.
Charlie, meanwhile, sits naked as he calls the police—apparently having had sex with most of them as well—to report his missing wardrobe. He is assured that one of the officers will be able to meet with him that evening, surely no clothes required.
Almost to the moment that Mory and Anta are off to their new voyage, Mory suddenly bolts, remaining in Senegal alone—returning as well, evidentially, to arrest, imprisonment, or, at the very least—and most probably—an indentureship of a homosexual life to Charlie and others.
In the end, Mambéty’s film is certainly one of the best African films of all time, but certainly of his decade. Sadly, the director died of lung cancer in 1998, having made only two feature films and several shorter works. It would have been wonderful to see where his “hybridity”—not being one nor the other—would have led him.