Yasujirō Ozu | 東京の宿 (Tōkyō no yado) (An Inn in Tokyo)

Yasujirō Ozu’s 1935 silent film An Inn in Tokyo—long after most other countries had switched to talking pictures—is a fascinating film for several reasons, most notably because, unlike his later tatami-based films, this one is almost all vertically filmed. Images of urban smoke-stacks, electric generators, water tanks, and telephone poles dominate this early work, truly contradicting the notions that Ozu was primarily interested in a Japanese past, based on domestic relationships that no longer existed. 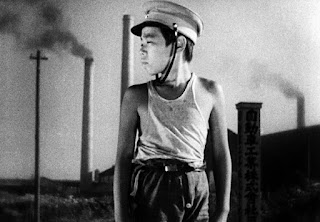 Secondly, although this movie is centered on a father and his two young sons, it is less a domestic work than it is a social-political statement. Although Italian directors such as Roberto Rosselli, Vittorio De Sica, and Cesare Zavattini are generally perceived as the creators of neo-realism, decades before their creations Ozu’s An Inn in Tokyo presents itself as a far tougher vision of that later cinematic movement than De Sica’s more sentimental and less believable The Bicycle Thief, to which this film is often compared by critics.
This “on the road” drama is a near-devastating trudge of a man, Kihachi (the wonderful Takeshi Sakamoto), who, in the Japanese version of the Great Depression, wanders the barren Koto district of Toyko in search of a job, being turned away again and again by doormen. So worn out from his sojourn is Kihachi that he has hardly the energy to argue with their decisions, let alone boast of any abilities he might possess. With their few remaining provisions in a backpack strapped to his youngest boy, Zenko’s (Tokkan Kozo) back, they walk forward, as one critic put it, as if they were on a conveyor belt going in the other direction.
Despite their near-starvation, the boys often pretend not to be suffering—although you can almost see them swallowing their lies as if it were bitter rice. The boys, who capture stray dogs who may be or become infected with rabies, are the only source of this ragtag family’s ability to sleep in local inns or eat their limited meals.
But these are, of course, children, who, at times admitting their deep hunger, also desire things they cannot afford. The elder son Masako wastes one of their dog-catching payments on a soldier’s hat, which he grudgingly shares with his younger brother—perhaps an early warning of Japan’s soon-to-be militarism; but when Zenko is commanded to again pick up the back-pack, he refuses to do so, the two momentarily fighting before together they leave all they have in the world behind. It is almost a dare to a world that offers them no future, and little possibility of ever again filling their bellies.
To divert their despair, at one moment Kihachi plays a childhood game with them, asking each to imagine what they would most desire. Critic Allan Fish describes the scene beautifully:

There’s one truly shattering sequence where poor Kihachi plays
along with his children’s pretend games, pretending to drink
sake as if dining like royalty, rather than slumped in the dry
grass on the roadside. It’s one of the most emotional sequences
Ozu ever shot, and certainly the most emotional sequence in the film,
though the finale, as Kihachi rushes off and leaves children out
of necessity is also hard to watch, and the control which Ozu
displays throughout is truly awe-inspiring.  No over-emoting, just
natural real emotions conveyed with both understatement
and subtlety.

Soon after, the trio arrives at an inn where they must make the decision whether to use the small sum of money have left on food or a bed. The boys quickly chose the food; when you’re starved a comfortable bed must seem like an unnecessary luxury.
Perhaps the only unbelievable moment in this movie is when Kihachi suddenly discovers that the inn is owned by an old friend, Otsune (Choko Iida), who not only allows Kihachi and her boys a free room for the night, but helps him find a job and offers him cheap housing.
Yet this version of Chaplin’s tramp is equally unlucky in his choices. Meeting an equally suffering woman, Otaka (Yoshiko Okada) and her daughter Kimiko (Kazuko Ojima), he attempts to help her as well, with a suggestion of budding love.
At the same Inn, when Kihachi brings her there for dinner, Otsune helps find Otaka a job in a nearby Sake bar. But when her daughter develops dysentery, she admits to Kihachi that she cannot pay the hospital bills. After he unsuccessfully attempts to get a loan for Otaka from his old friend, the desperate Kihachi steals the needed money, entrusting it to his sons to deliver it up to Otaka.
Admitting his crime to Otsune, the almost damned Kihachi finally entrusts his children to his friend as he determinedly heads off to the police to report his guilt.
We might possibly imagine some lenience; but we also recognize that it is highly unlikely. The man who had nothing except his sons, is now without anything or anyone, a sad ending as deeply profound as Steinbeck’s far more overwrought family saga, The Grapes of Wrath.

Posted by greenintegerblog at 9:11 AM