When Bong Joon-ho’s Snowpiercer first appeared in theaters in 2013, I couldn’t even imagine wanting to see it. I am not a big fan of sci-fi films, and the dystopian elements of it troubled me. Perhaps I’d simply read (and written) too many dystopian fictions. One of the earliest works I published on Sun & Moon Press was Len Jenkin’s brilliant dystopian work, New Jerusalem, and later his fiction N Judah, which also has dystopian elements. My own Letters from Hanusse (written under the pseudonym of Joshua Haigh) is a kind of dystopian satire of sorts.
Moreover, I’m not a fan of violent warfare films, particularly when they occur on a train bound to nowhere simply circling a frozen world. Besides, hadn’t I already seen just such a film in John Frankenheimer’s 1964 movie, The Train, in which another train speeding through an ideological frozen universe, ends up with corpses and major art works strewn over the tracks. Just as in Bong’s movie, life outside of the train meant certain death?
Finally, I simply don’t enjoy graphic novels, one of which, Le Transperceneige, was the source of Bong’s work. This, I determined, was simply not my fare. 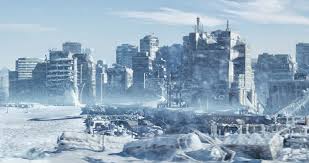 Yet after seeing, reviewing, and praising Bong’s newest masterwork, Parasite, I realized I should retrace my steps and see, thanks to Netflix, some of his earlier works.

I’m glad I did, for if, in some senses, this movie is an absolute mish-mash of genres and ideas, it’s certainly a brilliant one, filled with amazing images (who might imagine a single long train filled with scenes that might echo the Nazi victims of the Holocaust; dark, axe-bearing soldiers that callup Star Wars and the immense armies of the Tolkien films at the very same moment; drugged-out security guards locked away in metal drawers; as well as wonderous aquarium dioramas; a Chi-Chi sushi bar; hair-dressing salons; wild orphic dance scenes; a classroom presentation wherein young students are being indoctrinated into the worship of their own version of a Fuhrer, wrapped around the mad conductor’s determination to plow through an icy world destroyed by a fatal over-reaction to global warming?) as well as deeper ideas, reiterating Bong’s most recent send-up of class differentiations, with a souffle of cannibalism, homosexuality, bisexuality, maybe even pedophilia, and certainly child enslavement. As the mad Minister Mason (the wonderful Tilda Swinton) declares, “Wilford (Ed Harris) just loves children!”
Our would-be hero, Curtis later admits, in deepest despair: “I know what people taste like. I know that children taste best.” 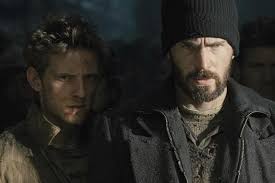 The conductor of this mad and narrow vision of the seven deadly sins (I saw the Kurt Weill musical vision of those sins later that same day!), moreover, is a practical being—as he perceives himself—using Darwin’s theories, a bit like the Nazi’s used Eugenics, to justify his attempt to balance his train ride to Hell from growing out of control. Sushi is eaten only twice a year to protect the aquarium from being overfished. And 74% of the train’s current population must be destroyed in order for the others to survive. This is a survival of the fittest gone crazy.

If the language of those last two paragraphs seems rather clotted with visual and ideological descriptions, it can only begin to capture the feeling of the hot-house atmosphere of Bong’s creation. 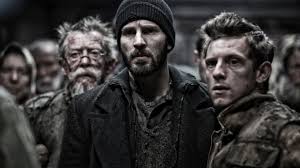 The revolution that the back-train sufferers fulminate—with the handsome Curtis Everett (Chris Evans) hesitantly in its lead, along with his second-in-command Edgar (Jamie Bell); his beloved friend Gilliam (John Hurt), who having sacrificed his leg for passengers to munch on instead of killing their own children, and who possibly may have been Edgar’s lover as well; Tanya (Octavia Spencer), who is desperate to find her missing children; and the security chief Namgoong Minsoo (Song Kang-ho) and his Intuit daughter Yona (Go Ah-sung), a girl, did I mention, who is also clairvoyant; among others—is not the first such uprising to take place. Those who finally did escape the train earlier, including Yona’s mother, were immediately frozen a few feet away from the hurling-ahead locomotive, and whose bodies are pointed to every time the train, on its long route across the earth, circumambulates the scene of their attempted escape.

It also appears that the sacrificing Gilliam may have been among them, but as the revolution comes its terrifying conclusion, Curtis finally forcing his way to the head of the locomotive to have a lunch with the aging and remarkably affable Wilford—Gilliam, now dead, after having warned his young charge that he should never talk with Wilford, but simply and immediately cut out his tongue—almost convinces the young hero to take over his role as conductor of this horrific traveling beast of a machine. 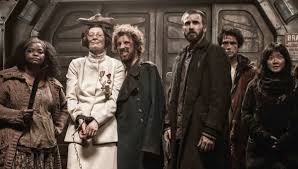 Curtis is almost convinced, but in the process discovers that Gilliam has also betrayed him, a man having sacrificed so much of his own life still plotting with Wilford to allow Curtis entry into director’s seat. It is almost as if Bong, who often works collaboratively, is admitting his own character to take over the very film he is making.
Yet when Yona shows Curtis a secret passageway where we witness Tanya’s children being used to help keep the train moving through child labor, Curtis realizes that he must help them escape, kill Wilford and allow the Snowpiercer vehicle to derail. In short, he denies his role as hero, himself, like Gilliam, giving up a limb in the process. This is a film where bodies are gradually chopped into pieces, minds lost into impossible memories. For the elders a kind of before and after that can again be grafted together, and for the young simply a world of mindless obedience to how things are.
The true hero of Bong’s film is not its macho leaders, but the young, previously drug-ridden Eskimo-conceived Yona, who takes the two newly-released children into the icy cold, while perceiving through their now squinting bright eyes a polar bear, that life may finally have returned to the frozen earth.
Whether or not they will survive, we cannot truly know. But like Shakespeare’s innocent Miranda—and one must recall that Yona was born on the train and has never been before out of it— she declares in her own manner, as she trudges through the deep snow—“O brave new world!”
If nothing else she had broken the ice in a way that the train passengers, bound by the railroad tracks which defined its truly limited path across the continents, might never previously have imagined.
In Snowpiercer Bong has given us a great dystopian fable for all ages.


Posted by greenintegerblog at 10:03 AM