TOUCHING THE UNTOUCHABLES
by Douglas Messerli

The significant French director André Téchiné has spent his long career, as a member of the second-generation New Wave, exploring alternate human relationships—particularly those that involve gay and lesbian sexuality.
His 1991 film, I Don’t Kiss, however feels very personal. Like the young almost cocky, certainly self-assured young (20-year-old hero) hero of this film, Pierre (Manuel Blanc), the director himself grew up in the Pyrenees and escaped his traditional educational and parental upbringing to Paris. Today he lives in an apartment overlooking the Luxembourg Gardens, which represents the pick-up place of his gay, mostly elderly, figures. Perhaps, like Pierre, Téchiné, at first, was not prepared for what he was about to encounter. He, too, arrived in Paris from the Pyrenees wanting to be an actor and writer—the latter at which he succeeded—and began to embrace gay sexuality. 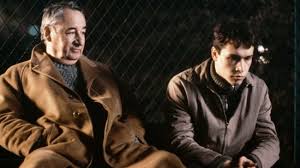 The major figure in this film, however, sees himself as an absolute heterosexual, attempting to first seduce a nurse, Evelyne (Hélène Vincent), primarily caring for her aged and not very agreeable mother. Although she is entranced by the sexual prowess of her young, literarily starving, lover, she quickly perceives that he does not truly love her, feeding him money, which he immediately rejects and escapes from the bedroom accommodations she has offered him.
Pierre is a purist, and even though he finds work at the hospital kitchen working as a dish-washer (a job I once had as well—boring and terribly messy, as you rinse and wash the plates of others) and begins to study drama, he is a horrible failure at both jobs. He can’t act, even when it comes Hamlet’s memorable monologue whose lines he cannot finish, and when he pretends he is ill to skip his dishwashing duties, he is fired.
Homeless robbed of his only possessions he caries in a canvas bag, he has no alternative but to return to the gardens where he has witnessed an elderly gay man, Romain (Philippe Noiret) pick up a young boy. Shocked by that encounter Pierre quickly exits the car, refusing to return for a ride to his temporary home.
After a quick trip to Spain with Romain, which Pierre might have suspected would lead to a sexual encounter and the financial remuneration, turns in different direction when his would-be lover picks-up another young man, Pierre escapes his paradise yet again for Paris, returning the the Gardens to become a male prostitute, informing his clients that "I don't kiss, I don't suck, I don't get fucked". The question is, what does he really do, presumably letting them masturbate him or letting him fuck them? In short he has become an entirely passive being, unable to express his own sexuality in any manner. 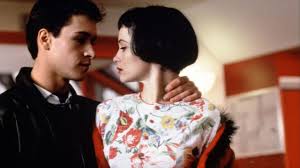 Arrested by the police for his behavior, Pierre falls in love with a female prostitute and, soon after, is beaten to near-dear before a rape by her pimp and others, forcing the prostitute, Ingrid (Emmanuelle Béart) to watch. The “Noli me tangere” innocent has suddenly been introduced into a violent gay world.
His answer is to join the French paratroops, ready to “lean into the void,” parachuting into the night. Yet strangely, upon returning home to visit his brother, he reports that he did not hate the capitol city, but simply wasn’t prepared for it. On his way back to Paris, the former innocent stops at a beach, removing his clothing and entering the sea, suggesting both a cleansing of his past role as a prostitute and an embracement of his male body, an acceptance, perhaps, of a sexuality he has previously refused.
Téchiné does not quite hint of what Pierre’s future will entail. But we do realize he will not be a passive but active figure in the determination of his future sexual life, wherever that may lead him. Yet “leaning into the void” does suggest that the sexuality he once feared will now be an acceptance of the dark attractions that once so troubled him. Perhaps he will now at least kiss, perhaps even suck and fuck. If nothing else, we know he has now been touched.