the dizzying past
by Douglas Messerli

Pedro Almodóvar (screenplay and director) La mala educación (Bad Education) / 2004
There is but a few sexual differences left out (except those involving women) of Pedro Almodovars’s 2004 film, La mala education (Bad Education), which includes gay, drag, transvestite, transsexual relationships, pederasty by a priest and principal at the Catholic school of which the movie’s title hints, and later child abuse of the brother of the child the priest lusted for. Besides all that, the director includes themes concerning drugs, robbery, defamation of religious relics, bribery, and two murders. This is clearly not a comforting in world into which you, if tortured by things out of ordinary, might want to curl up. 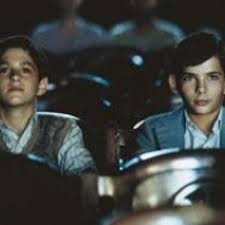 What starts out as an innocent love between the two schoolboys, Ignacio (Nacho Pérez), a beautiful young choir boy, and Enrique (Raúl García Forneiro) quickly shifts into a deep tale of lust and revenge. The two boys, like many adolescent males, fall in love, grope each other in a movie theater, and attempt to meet up again in the middle of the night in the school’s bathroom, where they caught by the head principal Father Manolo (Daniel Giménez Cacho). The loyal Ignacio even offers his body up to the priest, in a kind of odd spin of the Eucharist, if only Enrique is not punished; the offer is accepted but Ignacio’s dear friend is still expelled. As the later transvestite Ignacio says, "I sold myself for the first time that night in the sacristy.”
From that terrible event, the movie spins out a series of events wherein nearly everyone except Enrique shift names and sexual identities almost simultaneously. The lovely child Ignacio becomes a transvestite whore, Zahara (one of three roles Gael García Bernal plays in this work), who along with her friend Paca (Javier Cámara) evidently steals her customers’ keys, money, and cars in turn for a few moments of sexual pleasure. 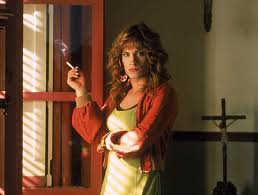 Indeed, early in Bad Education we observe her attempting to roll a handsome young man who is too drunk to accept her sexual ministrations. When Zahara discovers, after stealing Enrique’s billfold, that he (played by Fele Martínez), is the same boy (the adult Ignacio is performed by Francisco Boira) she once loved, the heist is called off, as they move on to take out her revenge against the priest who so changed her life.

Almodóvar never quite explains why the abused Ignacio has become a “fag” drag queen seeking to become a transsexual. This director rarely explains why his impassioned characters have chosen the lives which they live. Rather they shift in and out of the realities the films within a film reveal to us; or, for that matter, refuse to reveal to us.
While Paca steals the expensive church relics, Zahara confronts the Padre about their past, threatening to publish a story she has written—like Almodóvar, she is also a writer—if he does not pay her a million pesetas—a lot of money in the Franco days, which this film stealthfully references.
Fast forward to a moment when Ignacio visits the now successful filmmaker Enrique—who at the moment, reminding us of Almodóvar’s most recent film, Pain and Glory, is currently suffering a kind of creative hiatus—reintroducing himself as Ignacio (again Gael García Bernal), but who now calls himself Angel Andrade (a much better name proclaims the young would-be actor), has brought the story of “The Visit” to his former adolescent lover.

The director is intrigued, particularly when he recognizes the story which this older Ignacio has given him is the tale of their childhood love. Although Enrique is perfectly willing to cast the handsome young actor in the role of Ignacio, he also senses that there is something wrong with “the picture,” particularly when the now muscular Ignacio wants also to play the role of the drag-queen Zahara. He is intrigued enough, however, to take on this Ignacio has his lover, but confused enough to visit the boy’s mother in Galicia, who informs him that Ignacio has been dead for four years from a heroin overdose.
As Roger Ebert wrote, this is the stuff of Hitchcock’s Vertigo, a spinning out of a web wherein the central character cannot quite identify the Ignacio/Ángel/Zahara whom he is now encountering.
In truth, we soon discover, he is not really Ignacio, but his younger brother, Juan, who desires to become an actor, after having his affair with Ignacio’s childhood priest who has now have removed himself from his church life to become—in yet another switch of a name—Sr. Manuel Berenguer
(Lluís Homar), who also pays a visit to Enrique to tell him the “real” truth, that after being blackmailed by Ignacio/Zahara for years, he enlisted his young lover, Juan, to kill his own brother, which Juan did by providing him with pure heroin.
If you’re not dizzy yet, you should simply stand up on your nearest chair and jump into the delights of this movie, which like Hitchcock’s great masterwork, simply asks that you leap into its sexual confusions, significant guilt, and impossible desires. Enrique is faced with the dilemmas that James Stewart had to deal with in the Hitchcock work: is his new Ignacio a redone version of the person he once loved or a simply a murderer who has hung onto the jewelry (in this case the script and a letter) of the double of which he has become? 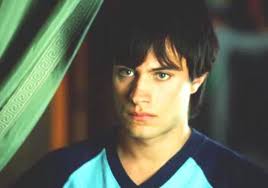 Like Hitchcock, Almodóvar doesn’t answer that question. Everyone in this film is a beautiful villain, destroying the very ones they most desire. An epilogue tells us that Juan/Ángel went on to a very successful career—until it declined, and he was forced into a television series. And he murdered again, perhaps in a kind of odd revenge for Ignacio, killing Manolo/Berenguer through a hit-and-run accident after having long been blackmailed by the former priest himself.
Oddly, all these figures are so very lovely—even the evil priest who is later, Juan’s lover—are such likable and beautiful people (the former priest describes his time with Juan as the loveliest period of his life) that you can’t truly hate them.
I think the film’s remarkable credits and the music Alberto Iglesias explain this film; reminding one of a collaged version of Saul Bass’s credits for Vertigo, they, however, move horizontally rather than vertically, pushing together images of people and events that cannot any longer escape their interactions as Hitchcock did constantly by his endless verticality. These individuals are all trapped by their needs in horizontal time, and they cannot escape rubbing together, destroying one another in the process. Leaping, falling, collapsing into space are not allowed in the world of Bad Education. The past haunts Almodóvar’s world in a way that the vertiginous spaces of Hitchcock’s film—which strangely allowed a dreadfully aloof redemption—in a way the destructive past of the Gallaecian world by this great Spanish director does not.
Los Angeles, March 23, 2020
Reprinted from World Cinema Review (March 2020).