Nothing is quite ever let loose in Jean Renoir’s lovely short, first talkie film, Un purge bébé, in which Mr. Follavoine, a porcelain manufacturer, is determined to sell a customer, Chouilloux, an influential official of the Ministry of Hosts, his porcelain chamber pots.
The pots are simply fine, and over the pace of the this short 52-minute movie, survive all sorts of public abuse. But what do you do with a child who refuses to take his laxative. Soldiers might indeed use them readily, but a spoiled child might readily refuse the medicine, laxatives such as mineral oil and others, to help cure him. 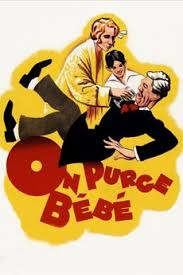 In fact, this is the very problem that Mr. Fallovine has not perceived. His angry wife, attending for their constipated child, refuses to get dressed, remaining in her midnight garb, hair curlers in place, in order to help entertain their distinguished guest.
The complications are quite hilarious, but as in Georges Feydeau’s original play—upon which this film is based—the focus of the work is on the real shit of the bourgeois society which Madame Fallovine is well aware of: how to heal a young, stubborn child who refuses what might make him
healthy.
It is a society, given her husband’s and others attempts to focus on simply commercial proceedings, that cannot heal the very people they might have loved. Sound familiar?
The continual intrusions of actress Marguerite Pierry, who properly scolds her husband and his would-be client are hilarious, as are the continual refusals of her baby to take the medicine that might heal him.
This, strangely enough, is a kind of ménage-a-trois between wife, husband, and the sometimes-sympathetic visitor, who play out the fears, from a Belle Époque perspective, of what the World War I soldiers might be facing. 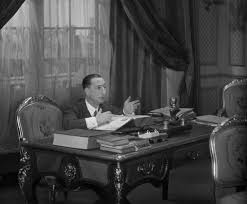 Of course, the fighting soldiers might need someplace to deposit their defecations, but buried deep in the trenches, porcelain pots, no matter how sturdy, were clearly not the answer! And, at home, it was even impossible to get a bébé to comprehend how to help relieve his system.
In the end, of course, these men mistakenly consume, as they have in their daily activities of life, the very medicine they and their wives have been insisting others must ingest.
Renoir does not show us the results, but we well know what will happen. Madame Fallovine, if she has not succeeded with her young son, has helped to cure the constipated society in which she must exist. The deal between Fallovine and Chouilloux, we presume, is thankfully over.
Those horribly suffering World War I soldiers will have to care for themselves.
And the baby will go back to bed to deal with his own temporary sufferings.
If not one of the great Renoir’s most significant films, this movie is a kind of short wonder that tears apart a society he would later satirize, with significant criticism, just a few years later in
Rules of the Game and many other works.
Un purge bébé helps to make me realize, once again, just how great Renoir was as a director, putting his significance in a new perspective, this an almost Rabelaisian work that subtly takes on issues which most other directors might have never tackled.

Posted by greenintegerblog at 11:57 AM No comments:

the joy of being different
by Douglas Messerli

It was a beautiful and also an incredibly sad experience today to watch Chris Bolan’s documentary about his great aunt, Terry Donahue and her life-time lesbian partner Pat Henschel, A Secret Love, the title based on the famous Doris Day song from 1953:

Once I had a secret love,
That lived within the heart of me
All too soon my secret love,
Became impatient to be free

So I told a friendly star,
The way that dreamers often do
Just how wonderful you are,
And why I'm so in love with you

Now, I shout it from the highest hills
Even told the golden daffodils
At last my hearts an open door,
And my secret love's
No secret anymore.

The long love between this couple, eventually lasting 70 years, is certainly beautiful, as well as their numerous memories, many amazingly caught on camera, of their long-term relationship, documented, in part, because the Canadian-born Terry was recruited to become a catcher on the All-American Girls Professional Baseball League created by Philip K. Wrigley, the heir to the William Wrigley, Jr.’s fortune, and Pat’s involvement in playing hockey—n important World War II event that has been now highly archived and represented in Penny Marshall’s movie A League of Their Own.
As critic Tomris Laffly noted:

Gay characters didn’t openly make an appearance in…Marshall’s
celebrated feminist sports film…but there obviously were lesbian
players in the league, as well as same-sex couples buried within
the depths of the stories that helped inspired the film.

Someday, we might even get a revelation of how many male sports players also were involved in gay relationships; but that will, sadly, still take years because of the ridiculous macho of male sport activities. 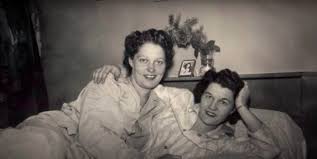 When the two women met, while playing hockey, it was immediate love, and they soon after moved to Chicago, where the couple lived for many years.
Yet the literal facts of their relationship—although through the clips we are shown was obviously charming as on the beach and in bed they lovingly enjoyed one another—is not as important as how they were forced to live their lives in the late 1940s and the 1950s in which they, along with gay men, were forced to hide their sexualities.
Under mayor Richard J. Dailey’s governance not only were lesbian bars often raided, but women who were wearing anything that might appear to be male clothing—a pair of pants with a zipper or a seemingly male buttoned shirt—were targeted and sent to the paddy wagons for arrest. Moreover, this couple, both with green cards given their Canadian nationalities, were terrified they might be sent home where they might not find any acceptance.
Even the members of the All-American Girls Professional Baseball League were required to wear high skirts and forced to attend “charm schools” to teach them how to be more feminine. Coming out to families often meant complete shunning and even arrest.
Despite Terry and Pat’s intense relationship, they determined to hide it, calling themselves, depending upon the circumstances, simply close friends or “cousins.” 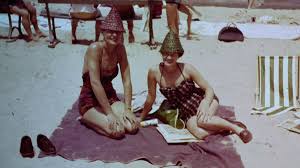 They found themselves a nice house in Chicago where the landlord found them to be perfect tenants, but they were forced to hide their own emotions, while they daily worked for the same interior design company, refusing to even go out to the bars. They found acceptance by attending house parties, often with gay male friends, dancing, costuming, and generally enjoying their lives behind closed doors. These women’s closet friends, it appears in this fascinating film, were gay male couples, a true early example of the coalition between gays and lesbians, and a lovely testament to the beginnings of the LGBTQ community, all of whom found themselves outsiders in a world for simply being “different,” a quality that these two lesbian lovers proclaim as helping to survive almost as a reward to their hidden lives.
Is it any wonder then, that as they grow older and begin discovering health problems, that Pat, in particular—clearly the more the dominant and dour of the two—are resistant to leaving the home that they now realize they must in order to survive.
Fortunately, Terry has a loving family back in Canada, particularly her truly beloved niece Diana, of whom Pat seems almost somewhat jealous. And Terry’s father, despite her mother’s far more close-minded values, seems quite open to her friendship with Pat, even to the point of wanting to adopt her as another daughter. 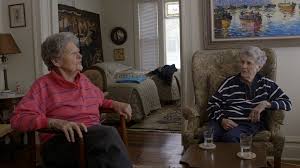 Diana and her family members, once the couple have finally, in old age, outed themselves to the niece, want them to return to Edmonton, where she and her accepting husband attempt to find them a good assisted-living home. Yet Pat resists, and the two return to Chicago.
As Terry develops serious problems with Parkinson’s Disease, Diana finally realizes that she must intrude, coming south to the US to break down, in a quite dramatic way, Pat’s resistance to any shift in their lives.
In fact, this is not as much a film about lesbian lovers as it is about what happens to LGBTQ couples as age descends upon them. And, in this sense, this film nearly devastated me, quickly realizing that Howard and I might soon be facing the same difficulties. We would like to remain at home, but will that, as we begin to suffer deeper health problems, even be possible?
Like this couple faced with the same questions, where will we go? Will we even be accepted as a couple in such elder facilities, particularly when these were of the same age of those who did not accept us when we were younger?
Thanks to Terry’s niece’s kind intervention in their lives, they do find a quite expensive (about $7,000 each month) assisted living space nearby to their Chicago home. Their having to select and pack up their loved home treasures is itself a painful episode in this short documentary. What chair, lamp, painting, photographic collection does one want to carry with one on their journey surely into death?
By the time they finally reach their new destination, where they fortunately do get along with the other neighbors and become lovingly adjusted to their new location, Pat is also suffering, and the woman she has so long nursed must now care for her. But here, finally, they commit to their relationship through marriage, with many of their gay friends and family members in attendance.
Ultimately, they both realize that they need to be closer to Terry’s loving family, moving to a care-home near Edmonton, where Terry dies with Pat still apparently surviving. Evidently, Pat grew closer to Diana and Terry’s family after the death.
This film, for me, was a bit like looking into a mirror of Howard’s and mine own futures. I had just the day before proclaimed in my “Advance Health Care Directive Kit” that I wanted to die at home. But, obviously, few get to do that. And what, after all, is home?
For lesbian, gay, bi-sexual, transgender, and other queer folk that is a question, as this lovely work reveals, that isn’t easily resolved.

Posted by greenintegerblog at 11:01 AM No comments: