James Ivory’s 1987 film, Maurice (the name of the work’s cinematic hero, pronounced “Morris”) is certainly one of the most beautifully filmed gay romances ever committed to celluloid. Even the costumes captured the attention of the Academy Awards, who chose this film for its Best Costume Award.
The acting, particularly that of James Wilby (as Maurice Hall), Hugh Grant (as Clive Durham) and Rupert Graves (as the stable boy-bay lover of Maur), is believable and effecting. Moreover, these three leads are all remarkably beautiful men.
Even minor characters such as Simon Callow (Mr. Ducie), Billie Whitelaw (Mrs. Hall), Judy Parfitt (Mrs. Durham), and Mark Tandy (as Lord Risley, young and older) are superbly acted.
The sets, particularly those at Cambridge and Pendersleigh, are breathtaking. 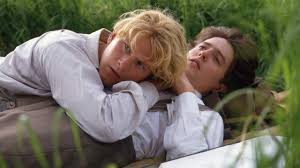 And despite a rather simple narrative—young Cambridge student Clive falls in love with another student, Maurice, but demands their love remains non-sexual because, so Clive argues, somewhat inexplicably, it would diminish them both.
Ultimately after a desultory trip to Greece Clive returns to England determined to break off his love affair with Maurice—particularly after the arrest and imprisonment of their acquaintance Risley for homosexual behavior—and return to heterosexuality, in part so that he might marry a rather clueless and not truly beautiful woman, Anne, he has met in Greece and become the sole resident with his wife of the country estate Pendaersleigh. In other words, he chooses wealth, position, and the sexual status-quo of English society, rather than his true love and sexuality. He is a coward in a world of such men.
In the second mirror half of this story, Maurice shaves his moustache—which Clive has somewhat justifiably dislikes—to become a younger looking and far more handsome boy. Clive now sports a small black moustache which completely alters his face, taking away nearly all of Hugh Grant’s natural beauty, if that’s possible. 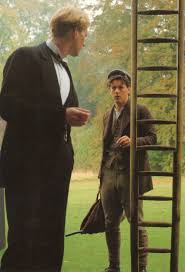 Posted by greenintegerblog at 10:35 AM