love until death
by Douglas Messerli

Through the introduction of a gay On the Road-like journey by two HIV-positive young men, Luke (Mike Dytri) and Jon (Craig Gilmore), an early favorite of “New Queer Cinema,” director Gregg Araki has created a fresh film that challenges ideas of love and survivability in one of the darkest times in gay history, the time of thousands of deaths from AIDS.
Several critics titled this work a gay Thelma and Louise; yet I would argue except for the act of two individuals getting into a car and driving through the US landscape without a true destination, Araki’s The Living End has very little in common with Ridley Scott’s 1991 film.
From the beginning these two have established to one another that they are both in process of dying, and, although several early scenes reveal Luke as a quite violent person—or perhaps we should say, as an individual who suddenly perceives himself as having the freedom to be violent or anything else he wishes to be, given his newly-discovered sentence of death—these two do not go about robbing stores or other establishments, despite the fact that Luke might well be willing too. Moreover, unlike the friendship that develops between Thelma and Louise, these two become desperately in love with each other, drawn forward, in part, out of the adventure of their having come together as a loving couple, as opposed to Thelma and Louise’s straying from the delimits of a closed-off society and an unloving and restrictive husband, these gay males move forward out of a kind of enchantment with one another, Jon, in particular, addicted to the craziness of Luke the way a one approaches a new lover in the search of discovery of who that being truly is.
Most importantly, these two, even though they might have thoughts of it, do not end up in a double suicide, as Louise and Thelma did in their willing drive off a cliff in the Grand Canyon. As Araki’s tile insists, even these mortally dying men cannot destroy one another, and will surely go on living to live throu all the pain and suffering that most gays and others struck-down by AIDS did. And that is precisely the point here, their love, by the end of the film, is stronger than death— stronger even than urge to now do anything they might wish without real punishment, w Luke argues for, since they are themselves already being punished for their previous sexual behavior.
If comparisons must be made, and I’m not sure they are even necessary, I’d suggest a more comic film of odd-couples who grow to love one another, while also traveling through new territory, such as Bringing Up Baby or What’s Up Doc? all overlaid with a strong dose of Nathanael West’s The Day of the Locust.
Certainly, in this film’s early scenes, before Luke has encountered the film-critic Jon, we are made witness to a Los Angeles that is as outrageous as West’s fiction. Attempting to hitchhike his way out of town, Luke is picked up by two women, one apparently transsexual, Daisy (played by the always brilliant actor Mary Woronov) and Fern (Johanna Went, a heterosexual, a lesbian, or just a maniac murderer on the run, we’re never certain). Fern, angry with Daisy’s flirting with the handsome pickup, points a gun to his head, while Daisy recounts somewhat like the Peter Lorre figure does the many murders of Jonathan Brewster in Arsenic and old Lace. When Fern, attempting to take a roadside piss encounters a snake and Daisy goes running to help her, Luke absconds with the car and her gun.
He doesn’t get far, encountering a flat tire. Despite his continuing attempt to escape the environs of Los Angeles he is constantly returned to the city, where this time he witnesses an S&M couple, she with whip in hand, pulling a shopping cart in which sits her humiliated lover. Later in the film, he and Jon oversee a violent fighting husband and wife using their car as backdrop outside of a Ralph’s grocery store. When the gay couple ask them to break it up, the arguing pair turn on the car-owners, demanding to be left alone. And these are just a few of the glimpses we have of a clearly apocalyptic landscape that is not so very different from that of West’s. 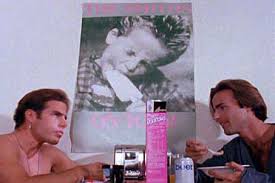 By the time Luke finally meets Jon, he almost seem to heave a sigh of relief in finding a handsome man who is in a somewhat similar situation to his own, as the two dive into bed for what appears to be ecstatic sex.
Even here, however, Luke has not quite tamed his demons, and is ordered to pack and leave by the more conservative and timid Jon, who if nothing else has a loyal and beloved friend—what gays used to call a “fag-hag”—in Darcy (Darcy Marta), a short-haired painter who has a live-in male lover whose hair is much longer than her own.
If Araki can be accused in this early part of the film as using a great many stereotypes to put us “in the mood” so to speak of what is about to happen, it is I would argue quite justifiable. For by the next day, Luke not only reappears at Jon’s apartment doorway, but admits that he has now totally “fucked up” in shooting and probably killing a policeman.
We know now that certainly some magic has happened between the two of them, when they quickly both jump into Jon’s car, finding themselves on their way to San Francisco, where Luke claims to have a friend who who put them up for a few days.
After the long drive, with many pit stops along the way, Luke admits that he not only does not know the name of his so-called friend, but does not have the address. Yet the two do find the row house where, where an elderly man comes to the door, while Luke attempts to make recontact with him, trying to remind him of a two-or-three-year-old sexual encounter. The man quickly closes the door, leaving Luke and Jon without a place even to shower and perform their toiletries.
Somewhere outside of San Francisco they find public showers, enjoying their new-found cleanliness. Jon calls up Darcy, but hardly is able to explain to her not only where he is, but why, and to where he might be going. It is, for him, like a kind of heady dream in which he has no sense of reality—but isn’t that what love generally begins as, a dream you cannot otherwise describe? But she, of course, is worried for him. This is not the Jon she knows, and for the rest of the film she smokes cigarettes with her phone placed just a few feet before her. Unable to provide her lover, Peter, with any sexual relief, he thoughtlessly leaves her, now without friend or lover, completely alone.
For Luke and Jon it is now a journey into the heart of darkness, an American landscape of horrible sites and consequences wherein the natives make logical sense about as much as Luke’s stop-and-shop meals, served always with heavy glugs of whiskey. The two not only don’t know where they’re at, but where the might be going. Cheap motels and open space, accompanied always with intense sexual encounters between the two of them, seems to keep them fueled for what might have been an endless journey where it not for Luke’s continued near-insanity and his always latent violence, which is aimed now only at empty bank machines.
When Jon again attempts to call Darcy, this time at her expense, Luke mugs throughout most of time, finger-writing on the dirty phone booth (this is, you have to remember a 1992 movie) “Luke & Jon are in love forever.”
Jon, it is clear, has finally accepted the absurdity of their voyage, but when he begins showing further signs of his illness, coughing sometimes endlessly, and after yet more imbecilic actions by Luke, he finally determines to return to his previous reality. Luke, always the rebel, understandably mocks it, but Jon is in control of his car and believes he might still be in control of his own destiny. 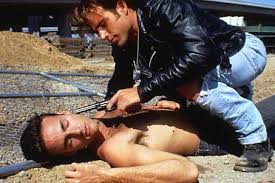 Depositing themselves yet again onto the turf of Los Angeles, the last scene is played out under the iconic 6th Street Bridge that connects downtown LA with East Los Angeles.
There in the sandy stubble under that bridge that makes it look as if they have landed in the some unknown desert, Luke, angry for their return to reality, seriously pistol whips his friend, pulling him closer to the car and, when Jon comes out of his temporary coma, rapes him, the gun cocked into Luke’s his mouth, ready to go off the second he cums.
“So do it already,” shouts Jon as he nears his climax, almost passively now awaiting the death of his beloved friend.
Sex is completed, but the gun remains silent, Despite all of his stated convictions, Luke too has honored some semblance of the past, if it is nothing else but an instinct for survival. 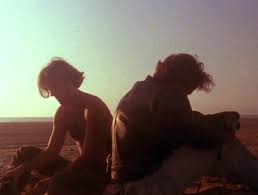 His logic now completely spent, Jon walks away, perhaps to return to some kind of normality.
The camera pauses before we see his legs on their return to Luke, as the two, clearly still desperately in love, hug and hover over a landscape of nothingness. Luke’s phone box message has spoken the truth that these two dying men will now together to face their ends.
Since we are all in process of dying, it is apparent that any deep love keeps us together until the end.


Posted by greenintegerblog at 10:39 AM