Chrissta Winsloe and Friedrich Dammann (screenplay, based on a play by Winsloe) Leontine Sagan (director) Mädchen in Uniform (Girls in Uniform) / 1931

As J. Hoberman wrote in The New York Times the other day, reviewing the new Kino-Lorber restoration of the 1931 German film, Mädchen in Uniform (Girls in Uniform), the film was am subtle intertwining to two themes: the fascist-like government of Prussia at the time these young girls were almost locked away within the walls of the Empress Augusta boarding school and the fact that these young girls were slowly being exposed to lesbian life by both their own attractions to their fellow school mates and through the beauty and gentleness of one of their head governesses, Fräulein von Bernburg (Dorothea Wieck). 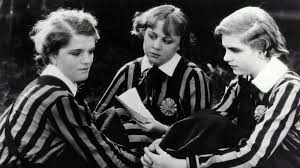 The latter theme, despite being at times overstated (one viewer wrote on Facebook: “This was one of the “gayest of early films I’ve seen”). In fact, throughout most of the early part of this film, we see very little evidence of actual lesbian relationships. The girls, having few others to confine their problems to, occasionally hold hands or even gently embrace, and occasionally they even write love letters to one another—with caution, I might add, since if they are caught exchanging any kind of letter, it is soon after read by the Headmistress, Mother Fräulein von Nordeck zur Nidden (Emilia Unda). Such behavior is quite understandable given the fact of their gender isolation, well documented among boys in British boarding schools and in such universities as Cambridge and Oxford (see my essays, for example, on E. M. Forster’s Maurice and the great code-breaker and innovator of the computer, Allan Turing.

What takes this film in a slightly more sexual direction results from the night smooches von Bernburg plants on the foreheads of the girls under her direction, making an exception with her new charge, Manuela von Meinhardis (Hertha Thiele) by kissing her goodnight on the lips. It is apparent that this kind teacher sees that the girls she is attempting to educate all need a bit of special loving, particularly the forlorn and quite terrified Manuela, who has lost both her beloved mother and her father. 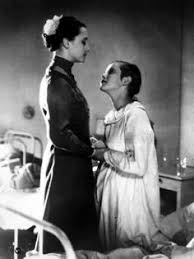 That does not mean that these young girls do not have sexual fantasies about Fräulein von Bernburg and one another. Like the girls in Lillian Hellman’s play The Children’s Hour written only 3 years later, in which a young boarding-school girl either imagines or recognizes that the two headmistresses are having a lesbian affair.
Manuela, given a new undergarment—one of the teacher’s own, when it is discovered that the girl’s shift is in tatters—takes this as a further sign that the head governess most especially loves her, revealing this, almost unintentionally, after she successfully plays Don Carlos in a school production of Schiller’s play and, afterwards, is made drunk by the punch, spiked by the school cooks.
In both the British schools and in this Prussian institution, such same-love feelings, if revealed, result in particular punishment, including ostracization and expulsion.
These attitudes, clearly, and yet another set of values embraced by Frederick the Great—whose statues, as Hoberman puts it, “litter the institution”—and by the Prussian sensibilities in general. These girls are not only punished for the slightest of infractions, but are underfed: as the heartless headmistress remarks: “the fatherland needs people of steel,” suggesting that hunger will transform the young nubile girls into machines that will help the country to survive.
When one young girl, Ilsa von Westhagen (Ellen Schwanneke) attempts to smuggle a letter to her parents, complaining of how little they are fed, the post is returned for improper postage, and she is banned from performing in the play, denying her one of the few moments of joy for her and other girls.
When she finally recovers from alcoholic stupor, brought on by the spiked punch, Manuel is not only told she will now be expelled from the school, but she is guilty of a deep sin for which she will never be forgiven. 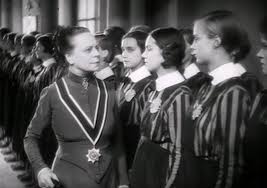 It is finally here, in the scene where Fräulein von Bernburg challenges the headmistress, asking her “exactly what ‘sin’ committed, and stating her view that "What you call sin, I call the great spirit of love, which takes a thousand forms."
She herself is almost fired and is certainly diminished in her role as teacher in the headmistress’s perception. But the elderly headmistress does finally relent, ordering the young Manuela to simply be isolated from all others for a period of time.
When Manuela hears of this from von Bernburg’s own lips, she runs off. Missed by the other students, they finally gather in a kind of rebellion (which Hoberman suggests by even have influenced Jean Vigo’s Zero for Conduct) in their search for Manuela.
They find her at the highest point of the high stairwell, having crossed over the bannister and ready to jump. As they quietly talk her down, embracing her in their midst, von Bernburg explains the ruckus to the seemingly unforgiving headmistress, suggesting that the girls themselves the institution from a surely damning scandal if the girl had actually jumped to her death. The last scene of the headmistress, skulking back to her office demonstrates that this crone of sorts has lost all power over the students of her institution.
In reality the girl on which the film’s Manuela was based, attended the earlier play by Christa Winsloe, the source of this film version,, with a serve limp she had developed after she actually did jump from the heights of this cursèd school.
The film was a great hit in Germany and elsewhere in Europe, while the US threatened to censor it, finally showing it only with a great many cuts, which just now have been restored. The Nazi government later banned it and its many actors, who were most Jewish, either escaped or were killed in the concentration camps.
I should add that I saw this film on the Kinomarquee, which collaborates its showings with film theaters across the nation, allowing some of the rental sales to be paid to theaters in your city. I was so very happy to help Lumiere (which, when Laemmle Theaters closed down the Beveraly Hills Music Hall, was purchased by some of their employees, allowing the venue to continue showing excellent movies.


Posted by greenintegerblog at 10:39 AM