people and places
by Douglas Messerli

Noah Baumbach and Greta Gerwig’s (she collaborated on the screenplay, and is the central actor in the work) Frances Ha, somewhat in imitation of the French New Wave films, is a film less a plotted than a series of personal encounters between the major character, Frances Halladay (Gerwig) has with others, many centering around shared apartments.
Yes, one could summarize these “encounters” and link them one by one into a sort of plot, but it would lead you nowhere except the different neighborhoods to which Frances moves after her best friend Sophie Levee (Mickey Sumner), with whom she attended Vassar, decides to move out of their Brooklyn apartment to her favorite Manhattan neighborhood in Tribeca. 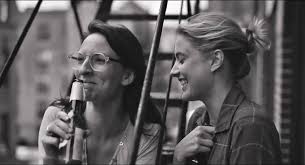 Her abandonment by Sophie, which is further extended when her friend returns to her for former boyfriend Patch (Patrick Heusinger), whom they both make fun of, but who, we later discover is a most handsome and successful man in the film, who eventually gets transferred by his company to head operations in Japan, taking the rather mixed-up Sophie with him.
Others of Frances’ friends describe Sophie, who previously worked at Random House, as a highly talented and a quite beautiful woman; to me she is rather plain-looking and a kind of disaster of a being, particularly when she gets drunk, which we witness when the two accidentally hook up again at Vassar, to whom the now rather well-to-do Sophie and her husband have just a significant contribution, while Frances, having no money to survive, is temporarily now works as a “pourer” (doling out he wine and other drinks) and a part-time publicist’s assistant who hands out fliers about the school to would-be students.
That evening Sophie crawls into the single bed with her friend, revealing through tears that she hates Japan and had a still-born which she otherwise would have aborted. She has also refused to attend the funeral for Patch’s grandfather in New York City. As Frances has earlier stated, they are a bit like lesbians who have been together long enough that they no longer have sex. Yet, it is apparent that these women are strongly heterosexual.
The next morning, as soon as sobered up, Sophie slips away, leaving a message that she has to hurry to New York to attend a funeral. And we are not surprised when she, soon after, marries Patch (real character name, Reade Krause) and returns to Japan with him.

Frances, a would-be dancer, still performs as an apprentice in a company for whom she works, hoping to eventually be part of the corps de ballet. But we know that will never happen, in part because she is somewhat of a klutz in both her body and her language. Several times throughout the film the camera catches her in extremely awkward positions or literally falling into space. When she attends a dinner party by wealthy acquaintances where she is asked to dance, she carries out her maneuvers with little grace.
When she is told, very gently by the dance company’s director, that they will be unable to use her the special Christmas show, Frances is quite devastated, because now she cannot even pay the  (discounted) portion of the rent of her new Chinatown digs she shares with two friendly males, Lev Shapiro (Adam Driver) and Benji (Michael Zegen).
A Christmas trip home to Sacramento perhaps explains some of her innate awkwardness. In the loving scenes of holiday celebration, we hear the various family conversation, each interrupting each, while her sister’s and brother’s children race through house, an uncle or some other relative playing, with great gusto, a trumpet. Despite the chaos, however, it is also a joyous occasion, filled with familiar laughter. Yet, so exhausting is this scene, just to assimilate, that it literally puts the viewer into a kind of dizziness.
Soon after, tired of hearing so many of her friends and acquaintances reminiscences of their times in Paris and elsewhere in Europe, Frances maxes out her credit card with a trip to Paris—reminding one a bit of the errant Toni Collette’s trip to Bali in Muriel’s Wedding—where she stays in a pied-à-terre owned by the couple who organized the previous dinner party she attended.
Yet Frances clearly does not take in any of the beautiful sites of the city, eating alone in small outdoor cafes while attempting to call two friends she has in Paris, who call back only as she speeds away, after three days, to the airport. We can only gather it was a convenient silence on their part.
At another meeting with the dance company director, she is now told that she cannot even remain as an apprentice, but is offered a temporary secretarial job in the office, and is encouraged to return to some of her own choreography done in conjunction with children. 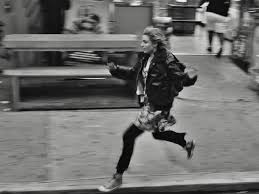 The hurt and frustrated Frances rejects those possibilities and scurries away to Vassar to work in the roles I’ve described above.
Yet, by film’s end, we see her back in Manhattan, working as the dance company’s secretary and organizing a children’s ballet corps for a new work she has choreographed.
The premier is well-attended by friends, and praised highly by the dance director for whom she now works. But even here, Frances clumsily faces in another direction, spotting, as she tells the director, her very best friend, Sophie.
Her former housemate Benj visits her in her new apartment, clearly in search of a new relationship with the previously “undatable” Frances.
In the very last scene, we watch her write out her full name, Frances Halladay, on a piece of paper for her new post box. But as she attempts to slip it into the slot it is too long, and she cuts off the ending, leaving only Frances Ha, a kind celebratory whoop of joy for all she has survived and for the new life she now perceives facing her in the future.
Frances Ha, although filled with noisy conversation and other interchanges of dialogue, in the end, is a quiet movie about the inner life and ultimate resilience of its hero, after her passive flops in her friend’s apartments and, at one point, even upon the sidewalk. For Frances does eventually become a kind of dancer, spinning through life the way the greatest of ballerinas might not have even imagined.

Posted by greenintegerblog at 11:45 AM