the unlikely father and his beloved son
by Douglas Messerli

Charles Chaplin’s 1920 release, The Kid, was his first longer film—an hour in length—and was produced, beginning in 1919 during a period of his unsurety about continuing his shorts and personal depression, since during this time he was also divorcing his wife.
Fortunately, he found the perfect child actor to play The Kid in Jackie Coogan, and, basing the film, in part, on his own childhood in British slums, he produced a brilliant and touching film about the New York City slums that might have been predicted by the reformer photographer Jacob Riis. 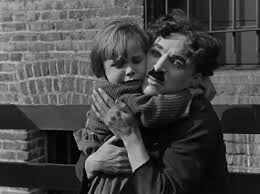 Chaplin’s film, however, never preaches, but tenderly shows us how an accidental encounter with a baby left on the streets to die, results in a close father-son kinship between The Tramp and The Kid as he grows up and survives in dire poverty.
The first few scenes represent almost brutal child abuse. The baby’s unmarried mother (Edna Purviance) begins this as we see leaving her the Charity Hospital. She obviously has no money and nowhere to turn. Seeing a beautiful mansion with a new car sitting on the street outside, she carefully puts her baby in the backseat, hoping that he will be taken in by the people nearby, leaving a note “Please take care of this orphan child.” And in that sense we begin almost where Olivier Twist began.
It so happens, however, that the car belongs to gangsters on the run who when they discover the child in the backseat leave him next to a garbage can on the slum street where they have temporarily stopped. They even debate shooting The Kid.
When The Tramp (Chaplin) accidentally comes across the baby, he too tries to rid himself of it, placing it in a pram a woman is pushing with another child in it. But she virulently rejects it. When the local policeman sees The Tramp with the child, he pulls it away and also attempts to put it in the same pram.
She again rejects it pointing out that it belongs to the Tramp, so Chaplin ends up holding the child again, briefly pondering what to do with it; for an instant he even looks the grate that leads to the sewers, but kind man that he truly is, he takes him into his almost barren room.
Before long, he has ensconced the baby in a kind of hammock, Gerry-rigged what seems to be whisky jug to deliver the child’s milk. In short he quickly becomes a natural father.
As the baby grows up to Coogan’s age, the Tramp cooks up big meals for him (unlike Oliver’s fate), forces him to wash his face and hands, and to say his prayers and meals at night.
Working as a glazier, The Tramp may “use” his son at moments to throw rocks through windows so that he might be asked to repair them. But even that seems more as a sport for the boy than child abuse.
In short, the newly-minted father and son relationship is as healthy—perhaps healthier—as those in the best homes of the city. Coogan’s love for his on-film father is truly apparent, and people involved with the film have said that Chaplin treated Coogan so lovingly that he might almost have truly been his father, although the boy’s real father was on set most of the time and plays the role of the pick-pocket when the two are forced to take refuge in a overnight sleeping shelter for the poor. 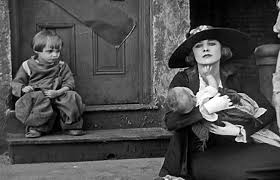 As in many a Chaplin film, the only true blockage to this loving relationship are policeman and other authorities, and the rich. The child’s mother has since become a famous and successful singer, and out of guilt often visits slum neighborhoods with small gifts for the children There encounters her own son without knowing it, also providing him with two small toys, which he comes love and which, later, a bully steals from him.

When she later returns with other such trifles, the mother discovers that The Kid is extremely ill, and demands that The Tramp call the doctor. 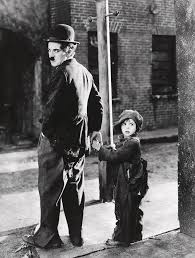 Unable to afford a good doctor, he calls in a Country Doctor who is a bumbling fool, who first sticks the thermometer into Chaplin’s mouth instead of The Kid’s, and proceeds to clumsily fuss around the boy rather than actually check him out.

When he asks The Tramp whether or not the child his truly his son, Charlie answers “Practically,” providing the doctor with the note that was wrapped up in the baby’s blanket.
That act leads the doctor to call the Orphan’s Home for them to come and cart off the child. A fight ensues, with the boy nonetheless being locked up in the back of an open truck, as if he some animal being led off to slaughter.
The Tramp, with the policeman on his tail, scales the roof and jumps down the other side as the truck turns the corner, throwing the head of the orphanage off the vehicle, embracing The Kid, and scaring off the driver.
Locked out of their own house, they take to the shelter I mentioned above. But meanwhile, the mother has returned to check up on the child only to find the doctor who, speechless over all that has just occurred, merely shows her the note she herself has written. Recognizing the situation, she puts an advertisement in the paper saying that there will be a financial reward for anyone who brings the boy into the police station.
The manager of the sleeping shelter reads this as his customers fall to sleep, and rushes the child off to the station over The Kid’s pleas for his freedom.
Missing him in the bed, The Tramp goes looking everywhere for his son, without any success, finally returning to his old home which in locked. Sitting on the doorstep he falls asleep.
What follows is perhaps the most kitsch and silly scene in all of Chaplin’s oeuvre, as many of the characters we have already seen wildly dance together in the streets, all attired in angel wings.
Perhaps that was only to prepare us for the slightly unbelievable ending, in which the policeman, finally capturing the previously evasive Tramp, takes him personally to the mother’s house, wherein The Kid is now ensconced. The Trap is invited in as if he might be asked to stay forever.
It may be that this new world represents Chaplin’s current position in life as opposed to his previous childhood poverty, but we might realize in this just what Chaplin, in his own life, might be missing in his current opulence.
The rest of the film, however, has been so poignant and touching that The Kid and The Tramp’s redemption are almost forgettable.
In many respects these last scenes parallel Oliver Twist once again, when Oliver, discovered by his rich uncle is given all the love and benefits he was previously been missing But his new world seems partially dead, whereas everything was so alive and wondrous in Fagin’s den.

Posted by greenintegerblog at 11:31 AM