Boy did film critics quite literally chew up Egyptian-born Canadian director Atom Egoyan’s most recent movie, Guest of Honor. Yes, Egoyan has in recent years fell into a kind of story-telling rut, and given the highly moral texture of most of his films, he has always been a bit sanctimonious in his exploration of guilt and innocence, including in one of his best works, The Sweet Hereafter.
Yet to describe his most recent characters as “ludicrous,” as Variety reviewer Guy Lodge did, or write as The New York Times critic Ben Kenigsberg that the film’s “core revelations are pretty silly, failing crucial tests of motivation” seems terribly unforgiving of the highly intelligent cinema-maker who, like so many other film directors before him, has suffered a short period of diminished results.
I’m far more sympathetic of this flawed film, agreeing with Glenn Kenny’s comments on RogerEbert.com in which he describes the movie as “a gratifyingly solid work that benefits from first-rate performers.” 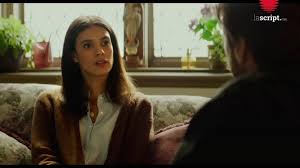 It is true that this version of family guilt and its repercussions is a bit melodramatically conceived and far more slowly revealed than necessary. Yet from the earliest of scenes, when the film’s major character, the seemingly totally honest and level-headed Veronica (Laysla De Oliveira), visits Father Greg (Luke Wilson) to help him prepare for his comments about her father who has just died without perhaps ever even attending Greg’s church, but nonetheless requested to be the site of his funeral, we quickly comprehend that there are far darker elements concerning this family-based drama than we might first have imagined.
The priest is required to be both a kind of confessor to a woman who has never previously crossed the vestibule of his church and also a kind of lay psychologist, particularly when he attempts to explore the reasons why Veronica has insisted on serving a sentence for child abuse while teaching music and conducting an orchestra in a local school—a crime for which she herself as well as the student she is charged with having abused, admit she did not commit. It takes almost the entire film, laid out in a series of interwoven flashbacks, to reveal her near saintly self-sacrifice. Perhaps like the Catholic canonized St. Veronica, she is offering up the vision of her childhood crime in reparation for her own past sacrilege and blasphemy.
What we do come to perceive in her encounter with Wilson’s character, played very much against type, is that the director is purposely withholding information which might long-ago have relieved some of his confessor’s guilt: that he has indeed known a great deal more about this case that he has at first pretended. But it order to explain that, I shall have to break through—dear reader, I’m warning you—a great deal of the webs of narrative Egoyan has woven around this late-revealed truth.
Let us simply generalize at first: Veronica’s father, Jim (an excellent David Thewlis) is desperately in love with his daughter’s Brazilian-born mother, but as she grows seriously ill, soon after dying, he becomes involved—at least as the young Veronica (Isabelle Franca) perceives it, reminding us a little of Henry James’ novel What Maisie Knew—with her piano teacher, at one point allowing her to hold his hand at Veronica’s piano recital while he is sitting next to her ailing mother and on several occasions both of them retreating during Veronica’s lessons for liaisons elsewhere in the house.
A child’s knowledge can be an intense experience, particularly when what she believes is a truth that stands firmly against the moral precepts she has been taught by both father and mother. For Veronica, appalled by what she believes she witnessed and, accordingly, now repulsed by her beautiful teacher, watches passively, soon after as her mentor, smoking a cigarette whose ashes fall to the couch on which she is about to nap, is later consumed by a resultant fire.
Worse yet, as Veronica grows up, dating a boy which, if I am correct (it’s hard to know in such knotted plot territory) the teacher’s son Walter (Gage Munroe), Veronica, to help expunge her childhood guilt, tells the young man of her childhood refusal to act, after which he determines to and succeeds in committing suicide by drowning. It’s almost inevitable, accordingly, that her refusal both times to circumvent death finally is repeated in her refusal to defend herself—despite the clear evidence that the cell-phone proposal to meet up for sex with her young male student was sent at a time when she was conducting her orchestra in which that student also performed.
Father Greg finally reveals his bombshell that Veronica’s childhood teacher was an active member of his congregation, and had confessed to him her relationship with Veronica’s father— more of a needed friendship than a series of sexual trysts—which had been sought out and approved by the young girl’s dying mother.
And that’s just Veronica’s side of the story. Her food inspector British expatriate father, as Veronica puts it, also made “several odd choices.” A true authoritarian when it comes to the rules of the food health board, both on and off the job, Jim can be both callous and forgiving about the restaurant negligence he uncovers.
He is happy to award a new Persian restaurant with the health board’s highest rating, while being rather callous when he proposes to close down a long-established Italian restaurant wherein he has discovered a dead rat. 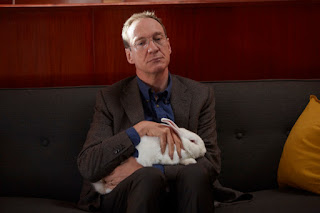 At an Armenian establishment he discovers an obvious dereliction of the rules, a pile of dead rabbits, with their ears lobbed off, in the kitchen. Not only has the restaurant traded in unprocessed food—source unknown—but is cutting off their ears for another restaurant who serves the delicacy of fried rabbit ears. It probably doesn’t help that Jim has purchased a live rabbit for his daughter when she was a child, and is now diligently caring for Benjamin the rabbit while she is imprisoned.
However, when the proprietor (played by Egoyan’s wife Arsinée Khanjian) begs him not to write her restaurant up, revealing that the rabbits are for a private party, not for regular customers, and that, if he wants, she will keep the ears and serve them up as a delicacy to the party itself, he overlooks that restaurant’s transgressions.

Yet, at another point the respected inspector becomes a kind of criminal himself, grinding up rabbit feces to make them appear to be rat pellets which he sprinkles on the bathroom floor of an otherwise spotless German restaurant in which he has just pleasantly dined, using the evidence as a kind of bribe so that he may interview the owner’s young relative who also works there, Clive (Alexandre Bourgeois), the 17-year-old student who Veronica is accused of having abused.
Despite his anger over being used (and one might argue, truly abused) in this situation, and knowing that just a few moments before the inspector had entered the toilet that he himself had washed the bathroom floor, Clive, nonetheless, confirms that Veronica was conducting at the very time she was said to have sent the cell-phone, suggesting that the message must have been sent instead by the bus driver, at the time supposedly protecting all the student’s cell-phones. 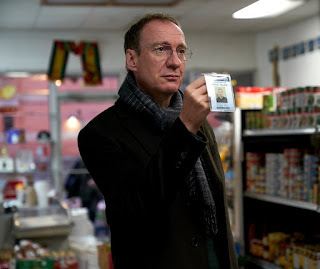 In a sense, Clive’s proof of his daughter’s innocence now leaves him without a role in her life; she has, in her demand to serve out an undeserved punishment, left him in the dark. Indeed, Jim is a man who, except for his awards and admonishments has had no one truly and deeply to live for since the death of his wife. As unloved as he is by the restauranteurs he encounters, so, does he come finally to realize, is he is now being ignored by his Veronica.

Invited to the party at the Armenian restaurant, he is asked to say a few words to the guests. Having already drunk too much, Jim embarrassingly babbles on, suddenly imagining himself as the “guest of honour,” a role he has never previously played in his life. His final words, that he will seek out the guilty bus driver and revenge his daughter’s imprisonment, not only shocks his audience, however, but results in a visit from police detectives the next morning.


As they begin to interrogate him, he suddenly perceives that his daughter’s long-lived rabbit has died. He returns to the Armenian restaurant, dead rabbit in hand, to ask them one last favor, to lob off the animal’s feet so that he might have the symbols they culturally represent of good luck, knowing, at the same time, that any luck in love or emotional caring has eluded him forever.

Posted by greenintegerblog at 11:27 AM