the difference between work and a job
by Douglas Messerli

Billy Woodberry’s excellent film Bless Their Little Hearts is part of the L.A. Rebellion, film scholar Clyde Taylor’s moniker for the group of black UCLA film students who, influenced more by international cinema than by Hollywood pictures, focused their works on the Los Angeles black world, particularly South LA, framing their works on the family and their friends, and expressing these portraits in a slow observation of their everyday acts. 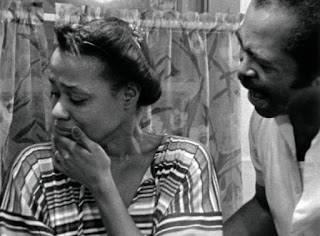 The eldest of these rebels was Charles Burnett, whose Killer of Sheep leaped to the screen in 1978, starting a revolution that also included Julie Dash (Daughters of the Dust), and others.
Burnett served as the screenplay writer and cinematographer of Woodberry’s work as well.
When using the word “leap,” however, I do not mean to suggest that these films became immediately popular, but rather am suggesting the impact they had on serious filmgoers of the time and years later, such as myself. In fact, these films have, until recently, been shown very seldomly at special film spaces such as New York’s Film Forum, occasional film festivals, and recently on DVD.
I saw Burnett’s Killer of Sheep at Film Forum in 2007, just before it was released on DVD, and Woodberry’s film was just recently released by Milestone Films, and is now available on the Criterion film-streaming channel. Both Burnett’s and Woodberry’s film have now been included in The National Film Registry, Bless Their Little Hearts in 2013.
Yet, none of these remarkable films have received the national or international attention they deserve, and although even the august magazine The New Yorker in a Richard Brody feature on both Burnett’s film and Woodberry’s in 2017, none of the L.A. Rebellion filmmakers has received the attention it deserves.
Whereas Burnett’s family have two children who run wild with other neighborhood kids, punishing and sometimes brutalizing one another the way the society has done to their fathers and mothers, Woodberry’s Charlie (Nate Hardman) and Andais Banks (Kaycee Moore) have three children who are far strictly attended to, particularly by their mother, who, since she herself since as she repeats throughout the film, she is “tired,” incredibly tired, involves something close to hard labor. 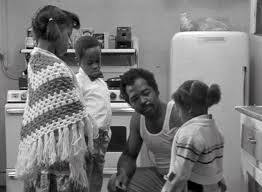 All her children, her two daughters and her young son (performed by Burnett’s own children) are asked to scrub down the walls of their somewhat ramshackle house, as well as to sweep up its floors. The eldest of Andais’ young girls is expected to cook dinner for her siblings and parents each night. If these children, at least, are not jumping from roof to roof or gathering for warfare on barren empty lots, they are, a bit like hired servants, put to work for the family’s survival.
In one painful scene—which in today’s more gender fluid world might hint at other meanings—their son, Ronnie (generally referred to simply as “Boy”) is sternly lectured by his father for having long nails, ordering up a clipper as he trims them while insisting “long nails are not for men, but for little girls, and sissies. You’re not a sissy are you?” We never know whether Ronnie’s tears are out of embarrassment for his father’s stern correction of his behavior or his sense of loss of a bodily extension of which he is proud.
The problem central to this household is Charlie’s inability not only to find a job, but his inability, even from piecework jobs, to bring home enough money to help support the children and wife he loves. In short, he, himself, has not been able to match the conception his has of what it is to be a man.
The film begins, in fact, with Charlie in a government jobs office, where he slowly fills in an application form with his name, yet seems quickly distracted by placards that celebrate more temporary jobs. As Andais later proclaims, he is a man made of pip-dreams, who for 10 years or more has promised to find a good job for himself without any result.
Sexual relationships between husband and wife have long vanished, as each evening Charlie attempts to hold his tired and disinterred wife before turning toward the wall in the other direction from her body.
Later, reencountering a woman friend his has known from years before, he spends time with her despite the fact that she is married with children of her own, offering up $90.00 of his paltry $25.00-a-day take-home pay, an amount which might have paid for at least one household bill.
At the end of her tether, Andais finally accuses him of having taken up with a woman with cheap perfume—she has smelled it on his body each night for weeks—as the two vent their frustrations and anger at one another for over ten minutes of film time.
As Brody writes: “The showdown that results—a ten-minute take in the kitchen, in which she unleashes her fury at Charlie and they both unleash a seemingly pent-up lifetime of disappointments and frustrations—is one of the great domestic cataclysms of modern movies, worthy of a place alongside the films of the same era by John Cassavetes.”
After their battle royal, Charlie has no choice, given his wounded dignity, but to spend the night with a friend, after briefly visiting his barber, who obviously is used to proffering advice to his clients. He argues against Charlie’s insistence that he is just looking for work; a job, suggests that he has to be able to convince someone that he has a special talent to accomplish that job.
Although, Charlie is clearly a hard worker, he has never even pondered the idea that the ability to work is not the same as seeking out some kind of employment for which he is best suited. 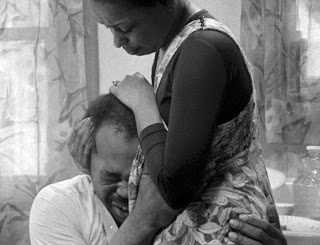 Unlike most Hollywood films, Woodberry’s film does not offer a simple answer to Charlie’s desperate search to match his talents with the capitalist system. It is more than painful to watch him desperately seeking something from his past from an overcrowded closet: his fishing rod and tackle box. The next day he visits the river, reeling in a catfish or two, and with other friends, opens up a small fish stand out of the back of one of their cars.

The others clownishly play the hustlers, attempting to steer in traffic and walk-by customers. They do actually succeed in a few sales.
But waiting in the car and watching their near fruitless attempts netting only a few dollars, Charlie finally trudges away while the others attempt to call him back. The last scenes we see of our sad hero are of him marching into the horizon, his back to us, having come clearly to realize that even what he knows best how-to-do means little in the world in which he lives.
If no other reason than Moore’s brilliant acting—she played the wife as well in Burnett’s Killer—this movie ought to be on everyone’s list to watch. And then there is also the tear-rending painful story that this picture conveys. We cannot even imagine who in this film is asking to “Bless Their Little Hearts,” or even if the film is referring to Charlie and Andais’ offspring or to them as well. But we can only imagine that by the time they grow of age, their childrens’ hearts will have hardened with that blessing having turned into an ironic cliché. For no one, given the racial disparities these South L.A. people have to suffer, can ever be truly blessed.

Posted by greenintegerblog at 1:27 PM