i don’t know what i like
by Douglas Messerli

If one ever needs a clear definition of what the Q means in the updated LGBTQ sexual/gender gathering, Eliza Hittman’s 2017 film is a good place to start. As the hero of this film, Frankie (Harris Dickinson) says time and again when asked about his sexual interests—in the case the pick-up girlfriend Simone (Madeline Weinstein)—and the middle-aged and elderly men with whom he connects many a night—“I don’t know what I like.” Standing in for the Q in the rainbow moniker, this cute, somewhat hunky, Brooklyn boy is not only constantly questioning his sexuality but feels “queer” in the most general sense, a being who does not fit in to any of the various societies in and out of which he slips. 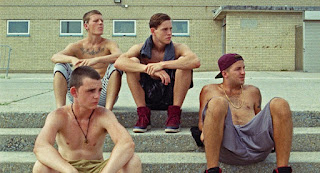 Indeed, the three “buddies” he daily hangs with on Coney Island boardwalk are twice specifically described by him as being “not my friends,” a strange locution which they tolerate, perhaps believing that he is coding to others that he and his “beach rats” are more than friends, when he is actually speaking a kind of truth, obliquely suggesting that the three homophobic thugs with whom he hangs out each day, and with whom he apparently grew up, are at the heart of his sexual confusion. For them, he self-justifies, he is forced to seek out his sexual encounters each night, hoping to score some weed or other drugs for their daily pleasure.
For them, Simone, who flirts with him one day on the beach, has to become, given his buddies’ expectations, his girlfriend with whom he nightly “scores”—although the truth is something far different, as he toys with the idea of a sexual relationship with Simone, abusing her verbally, after what seems to be a necessary intake of cocaine, when he finds it difficult to sexually engage.
When, at one point, she asks him “Am I pretty?” his mocking retort of “Am I pretty?” by pointing to himself, becomes something more than mockery as in his own self-loathing he seems to truly to be questioning his own beauty, made far more complex by the fact that the on-line computer customers with whom he makes late-night appointments are older, a tactic he uses to make certain that the his “buddies” might never meet up with his those with whom he has sexual encounters. We cannot help but wonder if Frankie might not be for happier with a young man of his own age whose beauty is as obvious as his own. Or, as critic Sheila O'Malley puts it in her Roger Ebert review: “Yes, I wanted to tell Frankie to go find a local LGBT center and get a new tribe of more accepting friends.” 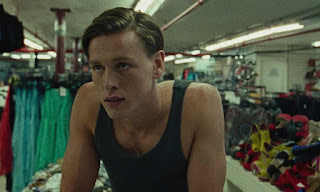 Eventually Simone perceives him as being too much of a “remake” or “upgrade”—as if he were a living room she would have to remodel—for her busy life. At least she has a job. After a night with his various male companions Frankie hangs out in a local vape shop to watch the professionals blow rings through the air—somewhat like one might watch bubbles being blown out of a pipe or the weekly Coney Island fireworks, which Frankie declares are unromantic because they are always the same, but still uses as the opeing image on the homepage of his computer.
Yet Frankie’s inability to break through his torturous enigma is precisely Hittman’s point. His “queerness” is not merely sexual, but a product of his feeling out of place even in his own life as a member of a working class family with a father dying of cancer who lies on a hospital bed in the middle of their living room, a mother (the excellent actor Kate Hodge) whose former good looks have been turned into a vision of an exhausted woman who badly needs her hair done, and a sister who daily makes out with young boys on the boardwalk and, like the empty-headed Simone, desperately desires a dangling belly button ring. Is it any wonder that the confused son has abandoned his former upstairs bedroom (of which, when his not so friendly “friends” are invited into, one mutters “I didn’t know you had a little brother”) for his alternative basement bear cave, where he keeps his computer and drugs.
Clearly, the director is fascinated by his beauty and the male body in general, as, against the shoddy entertainments of the beach; she moves her camera, lovingly held by cinematographer Hélène Louvart, across every crook and cranny of the male psychic. Her quite obvious voyeuristic approach to Frankie and his gang almost reminds one of the earliest of gay porno pictures, shot often on the beaches of New York, Atlantic City, and, particularly, of California and packaged as pretend “physique and muscle” magazines, very much in the manner of filmmaker Gus van Sant, whose bronzed porno magazine heroes briefly come alive as potential partners for who anyone who desires them enough. 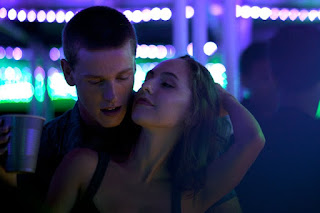 Indeed, the older men who meet Frankie for quickies in the bush or one-night stands in local motels, can hardly get over their good fortune in finding a kind of fantasy figure willing to be fucked in the flesh. No need for Frankie to ask these often hairy, ragged elders whether or not he is “pretty.” Even in his self-hatred he must know is what they have been always seeking in their on-line chatrooms. When he accidentally meets up with one of his late-night friends who is bar-tending at a Coney Island dance hall where Frankie has taken Simone, he is embarrassed and flummoxed about how to react to the free bottle of gin the bar delivers to his table, particularly when his buddies suggest he and the bartender must be friends.

It is perhaps at that very moment, the moment the young teenager has feared for years, that pushes him in the direction of revealing his hidden world without admitting any involvement in it.
Having hooked up with a rather sweet gay man, closer to his own age, he dares to admit to the trio of boys that he sometimes goes onto gay sites to find sources for his drugs.
These thugs are strangely intrigued by the fact, and even attempt, the first time he meets up with the man, Jeremy (Harrison Sheehan), to get in on the act, as if eager to actually meet up with a self-identifying gay man. Their actions immediately end the transaction. But when Frankie suggests to his buddies that he and Jeremy meet up instead in the woods near the Coney Island beach, where they can, so to speak, “grab the goods” (the weed he has promised to bring along), they are even more intrigued than before.
For them, we already suspect what Frankie seems to not quite be able to admit, that it represents not only an opportunity to get their drugs but to perform a kind ritualized gay-bashing, a  brutality which lies deep in their bigoted heats. For Frankie, as the BFI magazine reviewer Hannah McGill sensitively perceives, the issue of “whether his friends would mind being around gay guys if weed were involved, indicates his yearning to change everything without having to change a thing.”
After these thugs run the sweet gay boy into the water and begin to beat him, however, obviously everything does change. If, at first, in the horror of the scene, Frankie hangs back, when his friends, unable to find the weed, began to pummel Jeremy, he searches the waves nearby, discovering the packet and thereby releasing the gay man without further harm.
But in that very “act of inaction” Frankie knows that he has severed any relationship with his crew he may once have had.
While he has been away for the night another kind of major change has occurred in his life, as his mother, curious for his shifting behavior, enters his computer and begs him to tell her, when he returns home, what’s happening.
We don’t know if his mother has deleted all of his computerized gay contacts or whether Jeremy has notified the heads of the chatroom about Frankie’s actions, but he is now cut off from his nefarious past.

As always in this film, Hittman leaves the answers in the cracks of the few verbal communications in which her characters engage. He tells his mother nothing just as she does not share with her son whatever she might have discovered. And in the last scene, where Frankie now walks the boardwalk completely alone, the weekly fireworks crackling in the background, we, and apparently he, have still no idea where he is going, physically or psychologically. We only know that he now has no ability to return to where he was and has all the freedom to create a new space of his own making, perhaps one that will truly allow him to find the love we imagine (and, I remind you, it is only our imagination, perhaps not his) he has been seeking in all those worn-out stranger’s faces, genitals, and hands.
If the writer/director has given us no answers, she has, at least, opened up the possibilities, and not just those for Frankie. The three boys with who he has spent so much of his life are even less knowable that Frankie is. They are true ciphers whose names, after the film has ended, are difficult to even recall (Joe, Nick, Alexei I believe). Yet, one of them, perhaps Alexei, which I might describe as the “runt” of the group is different from the others. At one point, when Frankie and two others pull off their pants to briefly enter the ocean, this figure remains dressed, wearing his heavy-looking shoes as he sits back to watch the others in their furtive swim.
Later, when the same two move in to beat Jeremy and grab the drugs he has brought with him, we see this same figure immediately turn back and leave the site.
In these two actions we can readily perceive that, like Frankie, he too is someone who is “queer,” not sexually gay perhaps, but a figure uncomfortable with the activities of the others. And in that sense, he too is a kind of questioning “Q,” someone who doesn’t quite know where he stands in relation to those around him. One cannot make too much of these two subtle acts, but they do suggest, if nothing else, a turning away from the more normative actions of the others—even those of Frankie who behaves under peer pressure as someone other than he truly is.
If nothing else, it seems to me, Hittman is suggesting that people with clearly defined attitudes toward the world live always simultaneously with others who admittedly “don’t know what they like” or have little knowledge of where they are going. In the end, these figures are always hiding in full sight, ready to surprise the often-unthinking believers with an independence based more on questions than on preconceived answers. If society is to make any significant changes, it perhaps is to these Q figures to whom we must ultimately look. Those who seek no change sometimes accomplish the greatest of changes in life. Sitting on a train that is not moving may seem to be moving when a train beside it pulls out of the station. A bit like Einstein’s train and the man left on the platform who observes the lightning strike, it is a matter of relativity.