As improbable as it may sound, Stan Laurel and Oliver Hardy, in 1932, during the pre-Code days, Stan and Oliver were not only a same sex couple but had a baby in Their First Mistake directed by George Marshall,who worked with dozens of early comedians and, later in his career made Destry Rides Again and The Blue Dalia.
In this odd vector in the Laurel and Hardy series, Ollie is married to the ever-complaining Arabella (Mae Busch), who is particularly angered by the fact that nearly every night Oliver goes out with Stan to a performance (last night a “Punch and Judy” show) or other events, while leaving her alone at home. Later, even Stan ponders the truth: “But you do like my company better, don’t you?”
Oliver’s wife suggests that he “ought to be ashamed to even be seen on the street with [Stan].” For her, it’s probably just an issue of societal class; she’d certainly prefer him to be seen with his boss or another “up-and-coming” man. But for anyone who has been in sexual hiding or “in the closet,” it hits home as a statement about the two actually revealing their affection for one another, much like the way, so I’ve read, Cary Grant and Randolph Scott repeatedly scuttled their studio handlers intentions by switching theater seats with the young girls to whom they were assigned for the night in order to be able to sit together.
When the phone rings in the midst of her complaints—Stan on the other end inviting Ollie out for yet another event—the henpecked husband pretends it’s his new boss, Mr. Jones, making plans by simply speaking in code: “Yes, Mr. Jones.”
The often dense-headed Stan is confused, particularly after he calls back and gets the same wrong-named response. In a quite Beckett-like moment, he even looks into the mirror to see if he might actually be someone other than himself.
Arabella is pleased with this new turn of events, and is perfectly ready for her husband to have a night on the town with Mr. Jones. After all, it’s his beloved friend Stan, who happens to live directly across the hall from them, whom she cannot abide.
When Stan drops in the report to Ollie that it was he on the telephone, all hell breaks loose, as Ollie’s wife truly beats him until, opening the door to escape her fury, Ollie is met with Stan—secretly observing the to-do—falling into his lap. 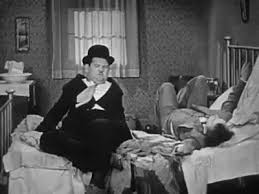 The friends escape to Stan’s apartment, both sprawling across Stan’s narrow bed, until Stan comes up with a “brilliant”—you see, I’m brighter than you look!”—that Oliver should adopt a baby, which would fill his wife’s spare time and satisfy her maternal needs.
Soon after, Ollie with Stan in tow arrive back with the new baby, only to find Hardy’s wife missing. We soon discover that she has, as she threatened, left him, sending a man with a summons which reports that she is suing Ollie for divorce and suing Stan for alienation of affections. 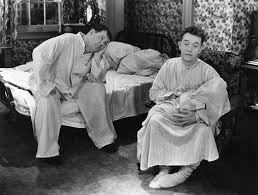 What follows is a kind of parody of a married couple whose relationship is falling apart, as Stan attempts to leave without even helping care for the new child. “You were the one who wanted to have a baby,” Ollie pleads to Stan, “You’re going to desert me when I need you most!”

As Stan heads to the door, Ollie stands in front of it, barring his way, demanding he take the baby, “I’m all fagged out.”
A series of skits centering on feeding milk to the now crying baby follows, Stan holding a bottle within his undershirt and removing it somewhat as a woman might remove her breast to feed her infant. 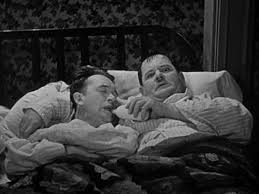 After a few comic riffs, mostly involving a floor lamp and its outlet, we observe the two friends lying in bed together with the baby on the far outside.

In his sleep, Ollie clearly perceives Stan as the baby, and snuggles up close, stroking his face and chest, while soon after feeding compatriot bottle after bottle of milk, which Stan greedily gulps down.
Evidently, there was not enough money budgeted to finish the rest of the planned film, but the fragmentary nature of this small gem seems perfect for “another fine mess” Stan’s gotten Ollie in.


Posted by greenintegerblog at 6:54 AM