DANCING THEIR DREAMS TO THE GROUND
by Douglas Messerli

For several years now the Greek film director Giorgos Lanthimos has been creating a series of dystopias, visions of society created by those in power or others outside and hidden from the general society that may be seen by their creators as different kinds of utopias—a world wherein a family’s children are sheltered and protected from the perceived excesses and breakdowns of the general society (Dogtooth); a society in which all beings find perfect mates who deeply share their interests and patterns of behavior (The Lobster); or where a woman who has literally served as a dress designer’s model and has been somewhat psychologically “made over” by him can turn the tables, so to speak, helping to transform not only the balance of power between them, but to help him discover new ways of living (The Favorite).
The trouble with all of these seemingly utopian visions has long been perceived: when people in power or who are secretly enacting their imaginary transformations of others, they generally do not take into account the true feelings and emotional well-being of those for whom they seek “better” lives; and their own attempts to enforce the betterment of the society around them is quickly perverted by their own misconceptions, psychological quirks, and failures to emotionally respond. In order to keep their children locked away in the paradise they imagine their have created, the parents of Dogtooth must lie and pervert natural desires, even going as far as to create false languages so that their children cannot even interpret the would outside of their domain; the dictators of the world requiring people to find their perfect companions mistakenly assume that love is determined by similarities instead of differences, or even more wrongly assume that marriage is the central defining joy of life; the former model who would achieve some level of control over her dominating lover’s life can do so only by serving him poisonous mushrooms that temporarily endanger his life by creating nausea and fever.
Lanthimos' 2011 work, also part of this series, deals more with a somewhat hidden team of would-be do-gooders. The group, which during the course of the film come to call themselves The Alps, have taken on the cause of helping people whose loved ones have recently died by “replacing” themselves as the daughters, sons, husbands, wives, and other relatives who people have recently lost. 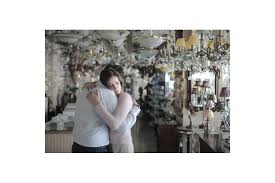 For a small fee, they learn of the habits, conversations, and friendly sexual relationships of the recently departed beings, parroting them back, generally without emotion, to family and friends. Often, they play out, again and again, over days, dramatic moments in the beloved dead ones’ lives: the discovery, in one case, of a young girl in bed with her new boyfriend, a sexual liaison a dead man had with a wife who was about to leave him forever, etc.

The well-meaning goal of these seeming therapy encounters is to help the grieved more quickly come to terms with their loved ones’ deaths. It never seems to strike the doctors, nurses, coaches, and others who play out these charades that by extending the relationships beyond death they may be, in fact, refusing the important process of forgetting, of letting those who have disappeared from their family’s lives go more quietly into death.
Moreover, what the director shows us behind the scenes of this group is their own personal demons intruding into the lives of the dead ones and their families. As Roger Ebert correctly observed in his September 2012 review:

Not a single person in the film points out the absurdity
of its [the Alps’] premise. We don't get to know the clients
very well, but we watch the Alps members as they train in
an empty gymnasium. In particular, we follow a gymnast
(Ariane Labed) and her trainer (Johnny Vekris), as they
work on a routine involving her dancing with a long ribbon
fluttering at the end of a baton.
She does this (very well) to classical music, but when
she asks to change to pop music, he tells her he will bash
in her face if she questions his authority. We find it is
no idle threat. This brutal relationship has no apparent
connection with the grief therapy of the Alps, which
otherwise consists largely of memorizing dialogue.

Need one mention that the Alps themselves are not so mentally stable? Later in the film the gymnast, convinced that she will never be allowed to dance to pop songs, attempts to commit suicide. Her friend, who has taken the moniker of Monte Rosa (Aggeliki Papoulia), a nurse in this group, 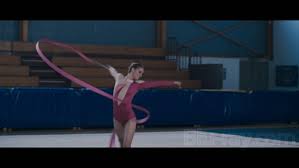 attempts to convince her trainer to allow her to perform to something other than classical music, which he agrees to—but at a cost. The nurse must carefully trim his hair before having sex.

Indeed, Monte Rosa seems to be required to participate and sometimes refrained from engaging in sexual activities, including with clients. At other times team members are punished by the leader, Mont Blanc, for the smallest of infractions, including drinking from or allowing others to drink from each of their assigned coffee mugs.
Monte Rosa becomes the center of Lanthimos’ drama, moreover, when she becomes infatuated with a dying tennis player (Maria Kirozi) brought to her hospital in serious condition, apparently from a car accident. At first she attempts to convince both the girl’s parents and the patient that she is getting better. 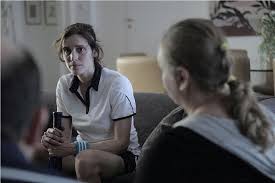 But when the girl dies, she suggests to the family that sometimes her group allows team members to take on private clients, and slowly worms her way into their household.

In fact, the idea of taking on “private clients” is totally antithetical to the Alps’ methods, and surely is one of the multitudinous rules that control their players’ lives.
Yet, the nurse goes even further, inviting the former tennis player’s young boyfriend to her house, where they have sex, Monte Rosa announcing to her elderly father that he is her new boyfriend.
Predictably, Mont Blanc follows her to the tennis player’s family home, later suggesting a heavy baton with an apparent light at the top will define her punishment for breaking the rules, which will mean her ouster from the organization if the light turns red.
There obviously is no light at the top, and redness of which he speaks is created only when he smashes the object into her eye, around which she herself must later sew stitches to prevent infection and help it to heal.
Now nearly completely ostracized from the tight society she previously inhabited, she then shows up at the dance club her father attends, grabbing the woman with whom she has seen him dance as her partner and, in surely one the strangest dance scenes ever performed on screen, quite literally draging the woman through a kind of deathly tango, finally depositing her on the floor.
A final attempt to regain entry to the tennis player’s home duing which she breaks through the patio window before she is escorted out by the girl’s father, ends with a protective barrier rolled down so that she can no longer ever again enter her strange vision of a paradise—a home and life which she apparently never had of her own.
The gymnast, meanwhile, has brilliantly come alive in her new role of dancing to pop music. Even her trainer seems utterly pleased with her performance; but we recognize by the somewhat salacious grin on his face, that her future with the Alps will surely cost her something which she may not yet be ready to pay.
The trouble with utopias is that they are inevitably imagined by human beings, earthly beasts who are all so terribly flawed.

Posted by greenintegerblog at 10:14 AM