death is death
by Douglas Messerli

Although I greatly admire the films of Ingmar Bergman, and have seen a number of them many times, my fourth visit to his 1957 classic The Seventh Seal had more to do with my attempt to honor the acting of Max von Sydow, who died in France on March 8th of this year.
I realized in watching this film yet again that a lot of my prejudice against it had to do with how the critics of the day reacted to it, describing it as a symbolist, allegorical, and even spiritual work.
Except perhaps for latter, The Seventh Seal, this time around did not at all appear to me as a symbolist work, based on the use of symbols, defined in Webster’s New World Dictionary as “something that stands for or represents another thing; especially an object that is used to represent something abstract.” 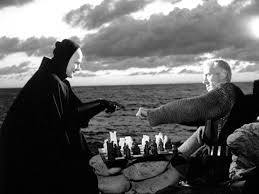 In Bergman’s work, nothing is really abstract: Death is death, the Knight just back from the Crusades, Antonius Block (Sydow’s role) is nothing more or less than a knight. Jöns (Gunnar Björnstrand), Block’s squire is just a squire, even if he is highly intelligent and creates, like the actor Jof (Nils Poppe), original songs. The rich natural world surrounding these and Bergman’s other characters, although filled with sometimes frightening events, an impending thunderstorm, the silence of all animal life, and a forest possibly filled with thieves, never stands for anything other than what it is; any other qualities attributed to it, as Bergman’s script makes clear, are simply projected upon them, without truly. The woman who bore a “calf’s head”—a tale doubted by all except for the most simple-minded of Bergman’s peasant folk—is only a imaginary revelation of the horrors the natives are suffering, the Great Plague, who somewhat resemble the flagellants who seek in self-punishment an end to the plague—not a symbol of the tradition of offering up calves to appease the gods.
Similarly, I now saw no allegorical images in this work, which posits just the opposite. For me, to quote Webster’s once more, “an allegory is a story [or poem] in which people, things, and happenings have another meaning.” In Spenser’s long poem The Faerie Queene is allegorical because this queen and much of her court stand also for Elizabeth I and her court. Here once more Death is death, the knight is a knight—even if he is about to go “tender” into that good night. In Bergman’s hands these and the other figures of the work stand for none other than themselves, figures of the Medieval era in which religious believers’ visions of Mary (who Jof claims to have witnessed) and encounters with Death were closer to natural events than to symbolic or allegorical representations. Perhaps only Block’s chess game with Death is slightly symbolic in that the game may determine how close to death he truly is. But even Death is rather straightforward here, in his tricks, having to pretend to be a priest in order to discover Block’s planned moves. Bergman’s solidly-grounded characters do not represent others—except perhaps for the entire human race who must each, at some point, encounter the emblematic “man with a scythe”—but stand for no one but their own temporary being.
As to being spiritual, one could argue that, particularly for Block, his voyage from the sea-landing with which this tale begins followed by his visits to the seemingly empty church wherein he again encounters Death, his pleasant hiatus with the loving and caring Jof, his wife Mia (Bibi Andersson), and their child Mikael, his later travels through the forest, and his final arrival at his castle where he wife, Karin (Inga Landgré), awaits him, represent a kind of spiritual search.
In so many of Bergman’s films, the hero (often played by Sydow) undergoes a loss of faith, which leads him only to despair and the total loss of his enjoyment of life. Throughout this work, Block seems almost indifferent to death; he battles for more time simply to be able to search for the proof of God’s existence that he is seeking, but which is also something he knows he will never be able to find. 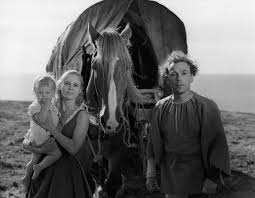 He does come close to that, however, in his brief time with the young actors, who immediately share their humble meal of wild berries and milk with him, while he observes the energetic beauty of the new life they have created. Is it any wonder that when the unlikely visionary Jof spots the knight playing chess with Death, he immediately pulls his wagon away from his fellow travelers to pursue his and his family’s own way through uncharted territory? In short, Bergman suggests, these naturally faithful beings do not even have to believe in God since they themselves are a manifestation of His love at work.
They too, at their journey’s end, wind up at the edge of the ocean, turning back into the forest to move on to Elsinore (a name created by Shakespeare to stand for the real Kronborg castle in Helsingør, Denmark) where they may or may not—particularly given the director’s own use of anachronistic elements (the flagellants never visited Sweden and the movement did not happen until the next century, the Crusades were over long before the 14th century world Bergman portrays, and Block’s “dread” is far closer to modern existentialist concerns than to the mind-thought of the Medieval world)—encounter another dead world brewed up by Hamlet’s plots of revenge from another century. 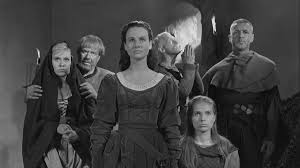 Finally, however, Block’s spiritual search as well as those of his companions who have also been taken into his castle, ends with them all bowing in obeisance to Death, to the nothingness they may now face, rather than delivering a short prayer or even a whimper to God. In the end, any spiritual truths they may have sought come to naught, as death leads them through the traditional “dance of the dead.”

I love the revelation that when Bergman actually filmed that scene, the actors had already decamped, so that he had to enlist “assistants, electricians, and a make-up man and about two summer visitors, who never knew what it was all about,” in order to create the famed penultimate panorama. No magic symbols or allegorical tropes at work here; these were the clueless people behind the making of the film and representing his potential audience.
I argue, accordingly, that Bergman’s film is truly none of the above, but is much more a blend of Medieval theatrical forms such as morality plays, farces, and masques than being an amalgam of any of the more Renaissance and Modernist genres often suggested. The more emblem-like scenes—the chess game with Death and the “Dance of Death”—which became popular in the 16th and 17th centuries, which critics such as Aleksander Kwiatkowski have used to argue for the work being allegory,are simply overlaid on these earlier genres to give the film a greater visual force. 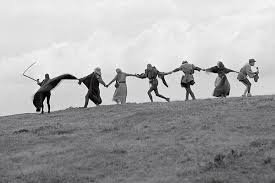 And when one loosens this work up from the far weightier genres imposed upon, it The Seventh Seal opens itself up to being a far more pleasurable narrative about different groups of people trying to live out their lives while having to face the terrible plague that loomed always in the near distance.
When I told my husband, Howard that I was about to rewatch Bergman’s classic on July 4th, he laughed. “What a wonderful movie of watch on a holiday,” he quipped.
Yet, actually, on an Independence Day in the US that I was not at all proud to celebrate, one that had long excluded blacks and now was brutally being consumed for his own purposes by an apparently mad-man president, not to mention the fact that we too were now daily facing a seemingly out-of-control plague in the Covid-9 pandemic, this may have been the perfect moment to rethink Bergman’s 1957 film. Like its character, Block, I too was charmed by Jof’s jump out of bed to discover a new morning, feeding his horse what appears to be string beans, and his hugging and holding of those he loved so dearly. The spectacular scenes of doubt and terror embedded in this work now seem as mere pageants that momentarily interrupt the pleasures of the little family at the center of this film, as they play out from the back of their wagon more domestic comedies.
Moreover, for the first time, I became aware of just how many elements of Bergman’s work had later crept into Andrei Tarkovsky’s great masterwork, Andrei Rublev, in which a boy who wants to make bells and a man who desires just to paint icons join forces to defeat all of those around them who stand against creation during the same time-period of the 1400s.
Seeing this early Bergman success which helped him to realize the many brilliant films that came after, made me far more appreciative of The Seventh Seal than I ever previously been.

Posted by greenintegerblog at 10:15 AM