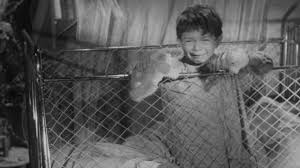 Trying to quiet the child so that we will not awaken his parents, the disconcerted robber quickly hands the kid his squeaky teddy bear, upon which he has accidentally stepped upon entering the dark room.
For a moment, the boy is quiet, but soon again begins wailing while announcing that his bear is broken, its head broken off of the rest of its body.
Taking out his bag of tools, the magical “uncle,” quickly brings the two parts of the toy’s body together again, delighting the adult-like infant. But by this point, we recognize that this child is far more cognizant of the world around him and language than we might have imagined. Like a character in an O. Henry work he comes quickly to realize that his wails bring other rewards. He will not cry, he insists, if his uncle will also fix his broken toy truck. The “uncle” has no other choice but to oblige.
The uncle repairs it, only to be told that the child’s father has lost the key to his piggy bank, the boy insisting that the intruder now open that as well. The burglar, of course, is a master at opening locks, and quickly springs it open, depositing a few coins into the delighted boy’s hand.
In one of the loveliest scenes of this 6-minute work, the lovely monster attempts to award his magical uncle with the shining coins now returned to him. For an instant, it appears, the burglar contemplates the offer, before finally closing the boy’s fingers around his own treasure.
At that very moment, the parents arrive back, having evidently left their more that capable child alone in the house. The former interloper, now recognized by the kid as someone he’d love to keep around, begins to flee, but not before the boy suggests that his mother has a drawer she cannot open.
“Another time,” sighs the put-upon would-be robber, as he opens the window from which he has entered and, as the child imagines it later to his scolding mother, flies away, having become a truly magical guest. “You’ve dreamed it all,” scolds the mother, “go back to bed.”
If any short myth can describe the imagination of the Czech people, the arrival of a mysterious being who can fix all in their broken world, it is this fable about an uncle suddenly appearing out of the air to save their lives. Yet they knew, in 1960, that it truly was just a dream. 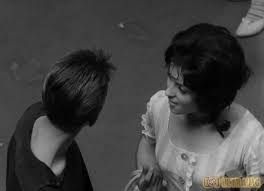 The Prague Central Station, what Jirés describes as The Hall of Lost Footsteps, is the focus of his more politically challenging film from 1960, which challenges us to make connections past and present. While demonstrating an average day in which people from all walks of Czech life gathered there to travel through the country and Europe, the director also insists that we look backward to the many trains full of Jews and others being carted away through that station to be taken to the death camps in Auschwitz, Treblinka, and elsewhere.
He uses stock images from the camps to help remind us of the horrors suffered by those so-called “travelers” would face at their destination’s end, forcing us to look into their faces while also observing hundreds of emaciated dead bodies being tossed by the Germans into pits where they will be buried.
The third leg of his trilogy of disappearing “footsteps” consists of all the horrors that have happened—the bombing of Hiroshima being, obviously, the major one—as a result of World War II, linking that, in turn, with the day’s news that France has just detonated an atomic bomb in the Sahara.
In a sense, for Jirés these events represent a timeline all of one piece, the vast array of people coming and going whose lives have been and will be permanently altered by traveling through the railroad halls, including that of a beautiful young girl, having just left her loving boyfriend, to return, it appears, to her school. She will not see her lover until her next vacation, and in the interim, the news of the day and recent past come to haunt her fears of not being able to return to their youthful love ever again.
Imaginatively traveling through spaces long past and recently experienced, she suffers the terrors of being pulled away from her loved one by both what she knows about the War and what she perceives may be the horror of the future, exemplified by the atom bomb.
If she, by film’s end, can eventually allow herself a smiling face again, it is only because of her youth and her belief, as all the young do, that life will go on and joy find a way to enter those haunted halls from which so many of her fellow citizens never returned.
Footprints is a far more inexplicable tale, although its narrative thrust seems quite inevitable.
A small farm family, who illegally listen to international radio broadcasts each evening, suddenly discover a young man knocking at their door. He is a wounded Russian soldier, who is not only in danger from the Germans who are in search for him, but is near death. The son and his mother carefully nurse the young Russian back to health in their small barn. 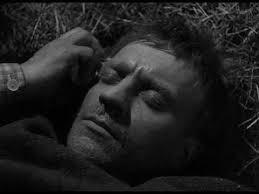 But what none of these family members know is that the man for who they are caring has left his footprints in the snow leading up to their homestead. Moreover, a begrudging neighbor appears to be following the footsteps’ path to his neighbor’s door, followed by another German soldier, noting his findings in a small black book.
The result of these events seem to suggest the inevitable—the arrest of both this family and the man they are nursing back to life. But strangely, we are never quite certain of what actually happens.
Oddly enough, the IMDb film site, briefly describes the plot in the following manner:

A Russian prisoner escapes from the Germans, finding shelter with
a Czech farmer and his family. A neighbor betrays them and is sentenced
by the villagers.

This short summary may just be badly written, but it appears to argue that the betraying neighbor is sentenced by the villagers. But we are never shown these events, and the last glimpse of the farm shows the front gate to their house broken open, with their lovely dog unchained and cowering beneath the fence. We also witness, just previous to this, the German soldiers pulling out of town, a large covered wagon among their caravan, presumably carrying their prisoners.
We can only imagine that their neighbor’s betrayal resulted in the arrestment of everyone on the farm. But then why is the German soldier restacking the same territory with complete attention to all of the details?
There are no answers to the truth in this film. But, at least, if the IMDb site knows something other than what were visually perceive, it may be evidence that the Czech citizens of this small village have surreptitiously taken back some of their rights, as even the naked evidence has come into doubt.

Posted by greenintegerblog at 2:53 PM