Jaromil Jireš (screenplay, after the novel by Milan Kundera, and director) Zert (The Joke) / 1969

Czech film director Jaromil Jireš' Zert (The Joke), based on the fiction by Milan Kundera, is generally described as the last film of the Czech New Wave movement. Although its making benefited from the Prague Spring uprising of 1968 and its opening in 1969 was an immediate success in the theaters, the new Czech authorities after the return of the Soviets, pulled the film from distribution, not permitting The Joke to be shown again to Czech audiences for 20 years, by which time much of its satiric sting and wit had been lost.
For decades now, I have argued that beginning in the 1980s, perhaps even earlier, the concept of irony had disappeared. I first saw it in the young students I was teaching. After being asked to read Jonathan Swift’s A Modest Proposal, the vast majority of my students were outraged by his suggestion that the British might dine on Irish Catholic children to alleviate poverty. I attempted to explain to them how irony worked, and tried to reveal the absurd exaggeration he was using in this particular case, all to no avail. They were angry that I had even put it on my syllabus, even though the work was featured in their Freshman English textbook.
Soon after I began seeing the same phenomena in the adult commentary. Today it seems almost impossible to imagine irony in a time when the outrageous has become so commonplace that we cannot perhaps recognize that it once stood for an exaggeration of truth. Try using irony in your posts of Facebook; I doubt you will last long without a series of highly critical responses. 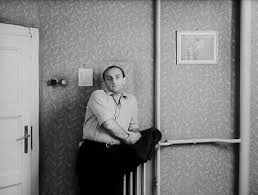 And if you cannot any longer recognize irony, I’d argue, seeing Jireš’ significant film today will not provide much laughter. For, it is irony presented as satire that is at the heart of The Joke. Tired of all the embracement of ethnic Czech culture, its costumes, dancing, the “anti-hero” of Jireš’ work, Ludvík Jahn (Josef Somr) is even more perturbed by the new embracement through music (he is, we later discover, a musician as well) prescribed by Soviet ideology in the late 1940s and 1950s during the Stalinist era, songs such as "We are building a bright new world" and "No more masters, no more slaves."
Soon after, Ludvick is interviewed in his university office by a young journalist, whose questions he answers so circuitously that she is left with hardly anything on either tape or notebook.
Our self-described ladies’ man, however, does get her name, Helena Zemánková (Jana Dítětová), who, he quickly discovers is married to a former friend, who represents both the love of the ethnic past and now the brave new world of Stalin’s program, Pavel Zemánek (Luděk Munzar).
Ludvik is even more frustrated by the fact that his would-be girlfriend, Markéta Pospíšilová (Jaroslava Obermaierová) is soon to marry a man more outwardly loyal to Communist doctrines, and that she, herself, is on her way to an indoctrination camp. As what he later describes as a “joke,” he writes her a postcard saying, in a grand string of ironic twists of Marx, Stalin, and previous threats to the current dogma of Communism: “Optimism is the opium of mankind. A ‘healthy spirit’ stinks of stupidity. Long live Trotsky.” 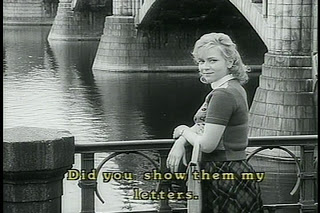 The more than literal-minded Markéta immediately turns over his postcard to the authorities, and before Ludvik can even blink he finds himself before the university committee where he is deemed a enemy of the state, stripped of his Communist Party membership and sentenced to 6 years of “reeducation,” involving a period in prison, army service under the tutelage of a drill sergeant who makes the word Sadist sound like a Papal blessing (one young loyal communist, tortured because of his continued belief in the cause is almost forced into suicide), and, finally, a year or more in the mine pits.
Perhaps just to underline his ironic and satiric structures, the director, somewhat overstates the issue with an alteration of youths singing "No more masters, no more slaves" while these most middle-aged slaves of their new totalitarian masters are forced to swing their axes into rocks.
Ludvik, quite amazingly, survives these six long years (some of his fellow prisoners even found their imprisonment extended) in fairly good health. Yet, as film critics such as Michael Koresky have observed, Ludvik has also been infected by the totalitarianism he has just survived.
Returning to the small city in which he grew up, a place he has long wanted to leave behind, he now plans revenge against those who helped put him in the “reeducation” program, particularly Pavel, who has promised to vote against Ludvik’s expulsion from the party, but along with Markéta, voted against him.
That town is about to celebrate what is described as the “King’s Ride,” a celebration that draws people from across the country to participate in its equestrian parades, and in the food, wine, and performances of local musicians, young and old.
To this event, 15 years after first having met her, Ludvik invites Pavel’s wife Helena, whom in seducing believes he might wreak havoc upon his rival. 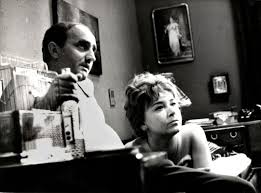 Helena does indeed willingly join Luvick in bed, and after claims she loves him, only gradually revealing that, although she is still married to Pavel, they have now both gone their own ways, he having taken up with a 20-year old. Although Ludvick finally meets up with his enemy of the past—now admitting that at the time of Ludvick’s trial he knew the postcard commentary was “a joke”—the would-be avenger suddenly perceives that nothing he has done will any longer matter. Pavel might even be happy that Helena has been removed from his life.
Now Ludvick must deal with the woman he has seduced, who claims to be desperately in love with him; his attempts to explain to her that he is not interested in a relationship results with her, locked away in a public loo, claiming she has taken an entire bottle of pills.
Her cameraman, secretly in love with her (as a journalist she is also attending the King’s Ride event), reports that he has refilled it only with laxatives, so the now seemingly unloved reporter will be locked away all day.
The cameraman now vows revenge and goes looking for Luvick, finding him now playing  the old songs he has previously eschewed, threatening him with a beating. Unable to ignore him, Luvick quickly pummels and brutally slaps the handsome young man with the muscles he has long-ago developed while working in the mines, lamenting “You fool. You are not the one I wanted to beat up.”—perhaps the most bitterly ironic statement of the entire film.

Posted by greenintegerblog at 9:22 AM