Jeffrey Schwarz | I Am Divine

whatever happened to harris glenn milstead?
by Douglas Messerli

When on-line Netflix announced the availability of a documentary on the film and theater actor, singer, and stand-up comedian/audience abuser Harris Glenn Milstead I almost passed on seeing it. Just from the previews I seen, this was pretty much a “talking heads” work, stuffed with mostly blurred and dim archival shots gathered by director and producer Jeffrey Schwarz.
Did I really need to review, moreover, yet another gay documentary, most of which concern men and women who were unjustly ignored in their lifetimes or, despite their notable achievements in other fields, were harassed and punished for being a member of the LGBTQ community? Milstead was neither.
True, as a young effeminate male growing up in Towson, Maryland (a family pediatrician warned his mother Frances that their son was “demonstrating too many feminine traits”) he was daily beaten outside his school—surely a bit of an overstatement (I too was waylaid by sadistic schoolmates on my way home from school, but if I remember honestly, it was only 3 or 4 times)—and like so many beloved mother-loving sons, when he announced to his mother and father that he was gay and had long been active in homosexual activities, they banned him from any future visits to their home, a decision which Frances later lamented. 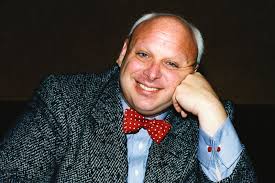 Of course, I’m being a bit deceptive about what I’ve said above. Harris Glenn Milstead was hardly unknown, but as the larger-then-life performer Divine had entered the consciousness of most individuals of the 1960s and 1970s by playing outrageous drag queen who was raped by a giant lobster (Multiple Maniacs), herself raping several young women under her matronly care in an long-running Off-Broadway play by Tom Eyen (Women Behind Bars), a forlorn woman who had a love-affair with real kisses with former teenage heartthrob Tab Hunter, and a gun-toting female who absolutely lived up to the moniker of the “filthiest person alive” (Pink Flamingos)  actually chewing up freshly released dog feces—an act provoked by his then director and former childhood friend John Waters which the actor later regretted, if nothing else because it was what most came to define him by later audiences.
I first realized that Divine had entered the national consciousness when one day my then-companion, now husband Howard came home from teaching at the University of Maryland quoting in a perfect Ballteemoran accent “If my husband don’t get me those cha-cha heels, I’m leavin’ him!” (Female Trouble).
Besides the larger than life persona Divine represented someone so outlandish and outre that even his imitations of the bellowing Elizabeth Taylor stolen from her roles in Butterfield 8, Cat on a Hot Tin Roof, Who’s Afraid of Virginia Woolf? and Reflections in a Golden Eye seem like a purring siren. 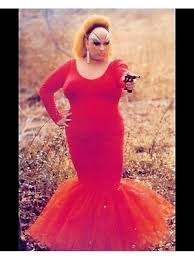 And how could anyone forget a 300-pound man highlighted by eyeliner that climbed his forehead reaching for the heavens while the rest of his body was poured into a bright red tight dress that slithered down the outlandish mounds of his hips to gather his legs up into rush towards the earth, impeded only by what fashion writer Emma Hope Allwood describes as “an explosion of tulle fishtail” dotted with a few rhinestones, along with, to prove she means business, a handgun in her outstretched left paw?

And who’s kidding? Those talking heads, who include director Waters, actors Hunter and Holly Woodlawn, and Dreamlanders and Cockettes such as Ricki Lake, Mink Stole, and Peaches Christ might snap the heads of any interested star-watcher. Together they tell the tale, as Nikola Grozdanovic, writing in IndieWire summarizes, of a person who suffered “lifelong struggles as a homosexual man who loved to dress up in women’s clothing, a pothead who wanted to devour everything in front of him, and an actor desperate to make Hollywood appreciate his talents… carefully balanced by his emphatic energy, altruistic love for people and all-encompassing generosity for those dear to him. What Schwartz succeeds in conveying is a complete picture of a flawed human being who was divine in much deeper ways than the most familiar one.”
Later in his career, even his mother became a fan, particularly when her son played the much tamer Baltimore housewife in Waters’ Hairspray, wherein Divine’s subdued performance received praise from even the often-trenchant film critic Pauline Kael. 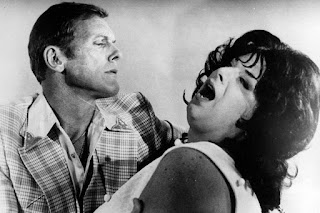 Of all his traits, it appears to be his utter kindness and gentleness that most defined his off screen and stage existence. And late in his life, Milstead struggled against conventional agent-logic in order to escape his foul-mouthed impersonation by performing as Harris, the actor behind  Devine’s well-documented talents.
Most of the figures who describe him also make clear that despite the power of his drag performances Milstead remained very much a gay man, not, as it may seem to many, as a would-be transsexual. He loved men, says Woodland, and laments that he had “many a handsome lover who made me jealous.” Even the twink porn star Leo Ford had a serious relationship with Milstead for a period of time. (As I’ve mentioned elsewhere in the volumes of My Life, I once had bathroom sex with Ford in Los Angeles.)
Finally, Milstead was offered a short stint on the television series Married with Children, playing a role closer to his true self. The night before he was to show up to the studio the grossly overweight actor died of a massive heart attack.