Chapman Mortimer and Gladys Hill (screenplay, based on the novel by Carson McCullers), John Huston (director) Reflections in a Golden Eye / 1967

I recall seeing John Huston’s Reflections in a Golden Eye when it originally premiered in US movie theaters in 1967 when I was 20. I certainly comprehended, at that age, what the film was all about. Three years later I met Howard—after a long year in New York City in which I was actively involved (nearly every night) in the gay scene—sharing in what is now a 50-year relationship. But I don’t think it dawned on me, at that time, just how audacious this film was, directed as it was by the heavy-drinking macho Huston with its sexually gay closeted “hero” performed by every woman’s heartthrob, Marlon Brando, sharing the love of a wife, Elizabeth Taylor—acting as if she were auditioning for the film in which she won awards for just the year previously, Who’s Afraid of Virginia Woolf?—with another more outwardly heterosexual neighbor, acted by Brian Keith.
Throw into this simmering pot a feu (“pot on the fire”) the highly neurotic character played by Julie Harris—despondent over the death of her son she has cut off her nipples with a scissors— attended by a gay Filipino houseboy named Anacleto (Zorro David), who dances at the drop of his mistresses’ stitches and paints while sitting at her feet long into the night—and you know you are in a world that could exist only in the imagination of writer Carson McCullers, who prefaces her story with such a matter of fact statement, ““There is a fort in the South where a few years ago a murder was committed,” that when the murder finally is committed we are not truly shocked. 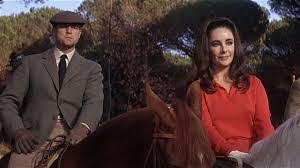 What is disconcerting is the intensity with which each of these characters suffer the various torches lit from within. Perhaps the list complex is the spoiled southern belle, Leonora, whose daddy was evidently once the camp commander, and who hence has lived a life wherein she often proves that she is stronger than any man on the base. As a child she played polo equal to some of the male seniors, and throughout the film she rides her beloved horse Firebird almost as if she were dancing out the captivity briefly imposed upon the firebird of Stravinsky’s ballet. As I mentioned above, through Anacleto, music and dance is equally central in the home of Major Morris Langdon (Keith), Leonora’s current lover.
He wife Alison Langdon, who knows of her husband’s affair and is secretly plotting a divorce, is so psychologically frail that she doesn’t even attempt to truly conceive of how she might survive without her Langdon, let alone imagine that he might use the situation to gently lock her away in an upscale institution for the slightly mentally disturbed. Soon after Alison dies, apparently of a heart disease, but in McCullers’ highly symbolic world we also know it is another problem of the heart, her husband’s disinterest in and his ultimate betrayal of her. 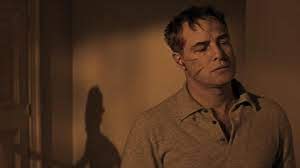 Even the seemingly level-headed Langdon appears to be a bit off-kilter when, after his wife’s death, Anacleto disappears. Time and again he tells Major Penderton (Brando) that he just wishes for the Filipino’s return—while continuing to argue that if the former houseboy could only serve in the military, he would be “straightened” out. Clearly there is a great deal of denial and misconception of how sexuality defines one even from the most reasonable of McCullers’ characters. Even Penderton tires of his friend’s laments for the loss of Anacleto. Indeed, we might almost be tempted, given the other characters’ deeply burning fires of the heart, that Langdon is obsessed with the houseboy in a manner similar to his wife’s dependence upon her companion.
Far deeper than these figures, however, is Penderton, who is painfully forced to play the spartan-like stoic while slowly coming to terms with his latent homosexuality with manifests itself in a enlisted man, L. G. Williams, who regularly takes a black mare out for a ride in a nearby meadow, where he strips off his clothes to enjoy a true “bareback” experience.

Increasingly, over the few days of this film, Penderton, while outwardly performing rote activities of camp commander, begins to lose even the embedded consciousness that his role demands, as he, quite literally, cruises the young Williams, subconsciously hoping even that he might be spotted in the act and that his sexual desire reciprocated. When the private drops a Baby Ruth candy bar wrapper, Penderton picks it up as if it were a secret message, putting it away in his special treasure box which includes pictures of naked male statues, a silver teaspoon he has stolen from another officer whom he and others believe is effeminate because he reads Proust and listens to music. At one point, inexplicably imagining that the young L. G. will soon be paying him a sexual visit, he preens in the mirror, carefully brushing his hair. Early on we have seen him exercising his body in order to keep trim and fit. 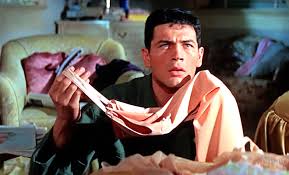 What he doesn’t know is that the young and very innocent Williams (Robert Forster), who according to his bunk mates is still a virgin, has become transfixed by Penderton’s wife, gradually turning into a complicated voyeur who, while Leonora sleeps, slips into the Penderton home and into her bedroom where he watches over her, rubs his face against her blouses, and sniffs out her perfumes. These scenes of extreme voyeurism, in fact, are the most truly sexual that this highly restrained film offers the viewer.
Huston, in the original filming, restored in the newest version I saw the other day, muted all the colors of Penderton’s world, turning them into a kind of dingy brown that snaps the colors of the female characters’ costumes (particularly those of Leonora) into a focus that is almost glarish. Is it any wonder that Penderton detests all his wife’s highly colorful bric-a-brac.
It is hard to say which of the two men, Penderton or Williams is the more innocent, since they both can never act on their secret passions.
Yet, Williams, we recognize is a truly gentle soul who nurses Firebird back to health and attempts basically to keep to himself, despite the taunts of his fellow enlisted soldiers.
On the other hand, in order to punish his wife’s emasculation of him and, perhaps, just to catch another glimpse of Private Williams, Penderton regular borrows Firebird, painfully spurring the horse on and, on one dat after he in thrown, brutally thrashing the horse, an act that Leonora repeats on her husband’s own face during one of her bi-annual camp get-togethers. We recognize that violence has become a way with both husband and wife in order to play out their dissatisfactions.
When she was still living at home, Alison twice saw Williams entering the next-door house, but each time she has attempted to tell others they have simply accused her of imagining things. So too, actually observing one of Williams’ late-night entries, he imagines that his metaphorical white-knight is suddenly arriving to allay his sexual longings. Penderton attempts to comb his hair into place, turns on and then off the light, leaving his bedroom door slightly ajar.
When the Private does not arrive at his doorway, he enters the hall and walks up the stairs to his wife’s room, in which Williams drops to the floor stroking Leonora’s clothing.
The inevitable and final action of outrage, as the author has previously suggested, is almost insignificant. It will be written up, surely, as a response to an act of breaking and entering. In her husband’s seeming attempt to protect his wife, Leonora may even begin to admire him for a while.
Yet the true desires of these characters will never to known or salved.

Posted by greenintegerblog at 1:46 PM