on fire
by Douglas Messerli

On June 13, 2020 the noted and notorious performance artist and filmmaker who, after various pseudonyms, including Brigk Aethy, Fag, and Tom Rhoads—performing as an unassuming clown, and various of his family members, including his own mother—chose while making his most controversial work, Sodom, as his name for the rest of his life: Luther Price, died at the age of 58. His final pseudonym was an amalgam of names calling up the great Protestant religious reformer, Martin Luther, the important religiously inspired black rights leader Martin Luther King, Jr., and Vincent Price, actor in dozens of films of horror and sleazy pleasure. 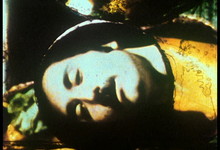 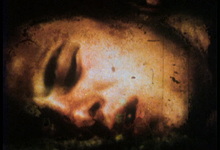 The transformative film created over to years, 1988-1989, combined gay porno films he found in dumpsters behind Boston strip theaters showing X-rated films, darkly lit biblical epics, and Gregorian chants looped to play backwards. Like Stan Brakhage before him—Ed Halter described Price as being “Brakhage after Punk”—he scratched the surfaces of his 17-minute tape and, more innovatively, punched holes in the Super 8 frames which he carefully filled in with other images from the porno figures, ecstatic faces and penises, as Roberta Smith described it in her The New York Time obituary, "jumped feverishly back and forth, almost as if the film were trying to escape the projector."
Superficially, Sodom might be described a being connected by depictions of fire: the biblical masses are seen often carrying torches and flaming pieces of wood to which they often set fire to everything around them; the Gregorian chants are now and then accompanied with candles set with glass tumblers; and the male bodies heat up and symbolically burn with the friction of their inserted cocks and masturbatory hands. This can be described on all levels as a truly “hot” piece of film making.
Quite predictably, more conservative viewers—although given the obscurity of Price’s films and the paucity of their showings, one can hardly imagine who such viewers might have been—found the filmmaker’s work as being scandalous, in a way similar of the early reactions to some of the photographs of Robert Mapplethorpe. Critic J. Hoberman perhaps expressed their viewpoint best, suggesting that Sodom might almost be seen as an “illumination of Jerry Falwell’s unconscious.” 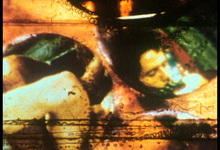 Far more surprisingly, many influential figures of the gay world refused to show it at such otherwise open-minded film festivals such as those in Los Angeles and New York, describing Price’s cinema as being “homophobic.”
Although eventually the film grew in fame as its iconic imagery came to be recognized over time for a new opening for gay cinema, that initial reaction—probably still held by some—completely stymies my thinking. Who’s kidding who, I immediately wondered at reading of this response? Didn’t nearly every gay boy and many a lesbian learn about their own hidden sexuality in the days before computer availability through porno magazines and films, to say nothing about all those heterosexual kids who were exploring the more normative variations?
The director himself, although surely knowing, given his name change, that what one critic described as his “Boschian vision” of gay sexuality might rub some even otherwise sympathetic viewers in the wrong way. Price himself, however, argued against the viewpoint that maintained he was presenting gay life was a monstrous Rabelaisian-like hell: “I became known as this gritty, badass, gay filmmaker and…I’m not. Yeah, I’m gay, I like to look at guys’ asses, but Sodom is not a pornographic for to me. It’s just very fleshy and visceral, and it talks about a story.”
Instead of seeing the sometimes almost violent gay sexual activities as representing all the negative images called up by the Biblical visions of Sodom, I think we have to ask at least one important question questions: if the porno images represent Sodom, where then is its twin evil, Gomorrah, in this picture? (The historical cities were apparently part of a series of six cities along the Dead Sea, which were probably destroyed by earthquakes).
I think we have little choice but to perceive those images torn from the biblical epics the director employed as being far more violent than are the sexual interchanges. In almost every brief scene that this film shows us of the biblically recreated world, the crowds seem to be massed with arms held up in anger or revenge, sometimes, as I mentioned above, holding burning beams of wood or torches, while in many scenes these religiously inclined men are burning down everything that lies around them.
Mightn’t we then ask if the sometimes seemingly tough sex scenes are more horrific than the men of god revenging, one presumes, the heathens around them. Both visions are single-minded in their intensity, and both involve, to a large degree, the ecstasy—bodily (expressed also in the obvious materiality of the film itself) and spiritual, both enhanced by the perverted (spoken as in the Devil’s language in reverse) monkish chants, which at one point sound almost like a series of howls before they return to the quieter male choral monophonic sacred songs of the 9th and 10th centuries. In none of these worlds are women allowed, and all three share a commitment of patrimonial action and belief that is implacable, unable to be mitigated as faith generally is. 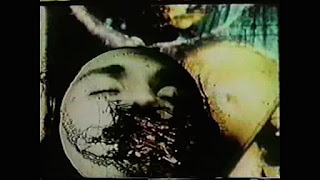 In fact, these visions are embodied in both Old and New Testament figures and their stories from Abraham and Moses to finally Christ, who is the body made holy by the spirit of God (to slightly restate The Apostle’s Creed).

In a very clear way Price’s film is similar to the famed photograph of two years earlier, which also received severe criticism from both conservatives and established artistic communities: Andre Serrano’s Piss Christ which pictures a small plastic crucifix floating in a tank of the artist’s urine—yet another statement of the body linked to the holy. Indeed, Serrano’s reaction to the outrage his art received is remarkably similar to Price’s reaction: "I had no idea Piss Christ would get the attention it did, since I meant neither blasphemy nor offense by it. I've been a Catholic all my life, so I am a follower of Christ."
The major apologist for Price’s film, Michael Wallin, describes it in terms quite close to those I have used in my linking of the sacred and the profane:

Beauty, pain, compassion, power, pathos decay, tenderness…
These words all come to mind trying to get a fix, as it were,
on this super-8 film by Luther Price. It is elusive. Sodom is a
visceral experience of such passion and intensity that coming
to terms with it in words seems a futile exercise. Yet
it’s a film so provocative and confrontational that it demands
response.…It hits somewhere in the solar plexus, that nebulous
area where emotional and physical sensations converge.

If the word “emotional” can in any way linked to the word “spiritual” or as something of the imagination and mind, then I think I very much agree with Wallin, despite obviously my own commitment to attempt to come to terms with this work in words in order to better comprehend it.

Posted by greenintegerblog at 12:17 PM