the good soup
by Douglas Messerli

As critic Darragh O’Donoghue, writing in Senses of Cinema, correctly observes, Mario Monicelli’s 1958 hit film I soliti ignoti (Big Deal on Madonna Street)—in its genre of being a “spoof”— exists “in a parasitic relationship to the form or medium it parodies.”
If you’ve ever seen a good robbery caper such as How to Steal a Million you’ll easily catch the humor of this great Monicelli film. But I’d also suggest one or two of Jean-Pierre Melville films (Bob le Flambeur, The Red Circle) and, in particular, Jules Dassin’s 1955 Rififi to which this Italian film pays homage before you visit it.
After the early frames of such films, in which the “situation” is established, plot is dispensed with, as the movie hunkers down on the details of how the thieves will accomplish the task before they actually move in to achieve what they have planned.
Already in the early scenes, we recognize that something about the figures who will later pretend to play the fine-tooled artisans able to successfully steal the jewels, is amiss. Trying, quite successfully to steal a car, the long-time crook Cosimo (Memmo Carotenuto) is run down by two Roman mounted police and imprisoned for a few months.
Yet his accomplices cannot wait, having been told by another inmate that, as a bricklayer, he had intentionally created a paste-board wall between a vacant apartment and a successful pawn shop room wherein sits its safe.
After several frustrating attempts to find a man without a criminal record to “substitute” for Cosimo by confessing to the well-known crook’s crime—most of the men they approach have beloved mothers or lovers, having no interest in spending even a short while in prison—they finally come up with an aging and deteriorating boxer, Peppe (Vittorio Gassman), who at first refuses them, but when he is defeated by a third-rate colleague goes along with their plot just for the money.
The warden, however, not only does not believe his confession but throws him into lockup as well. Complaining to Cosimo that he has now been sentenced to three years, Peppe’s sad news is awarded by Cosimo revealing the entire story of the intended heist.
Upon getting most of the details, Peppe reveals that, in fact, he has been given a year’s probation, strolling out of the prison walls with the intention of gathering the small gang of second-rate thieves to accomplish what appears to be a “sure thing.”
They quickly discover, however, that the apartment is not vacant but is rented to two elderly sisters who have hired a female maid, Nicoletta (Carla Gravina), with whom ladies’ man Peppe quickly falls in love, but not before she tells him that the sisters travel to the country on weekends, he arranging a sexual rendezvous with her the next Sunday.
So his small gang, originally organized by Cosimo, consisting of the young petty thief Mario (Renato Salvaton); a Sicilian crook who needs the money for his sister Carmelina’s (Claudia Cardinale) dowry, whom he intends to marry off to a pious fool, until Mario and she furtively fall in love; a poverty-stricken photographer, Tiberio (Marcello Mastroianni) who has had to sell his camera in order to pay for the baby supplies and food for the son he is caring for while his wife waits out a short sentence in jail; and an elderly pickpocket, Pisacane, who prefers throughout to eat rather than actively participate in their preparations. An elderly safecracker, Dane (Totò), is paid up-front by the group for explaining to them the basics about how to break into a safe; he refuses to participate in the final caper.
While Peppe assures them that the break-in will be an easy one, even the usually severely abridged Google entry turns their short trek into a near-epic voyage: “to get into the apartment they must cut a lock on a coal chute, slide into the basement, sneak into a small courtyard, climb onto the roof of a first floor apartment, break into the vacant apartment through a window, then punch through the wall between it and the pawn shop”—all before applying their unfamiliar tools to the nearly impregnable safe.
Meanwhile Cosimo has been released from jail, and in revenge of his former partners, plans his own a course of far more direct action, first attempting to rob a woman who has just left the pawnshop, and then, directly trying to intimidate the pawnshop teller by laying the gun before him warning of his intent plays out a scene that reminds one of the later Woody Allen schtick in his film Take the Money and Run, in which Allen as the would-be robber writes out a note saying “Please put $50,000 into this bag and abt natural, because I am pointing a gub at you." In this case, when Cosimo asks the teller “Do you know what this is?” the employee simply picks up the gun and glibly announces its name and make, almost ready to name him a price for putting it into hock.
At approximately the same time his former gang members slide down the coal shoot only to discover no soft coal dust but filthy water at its end. As you might expect, everything that can go wrong does.
Although Peppe has been given the keys to the apartment, but out of love delivers them instead, as he promised Nicoletta, to the janitor, putting himself and his crew through the grueling tasks of crawling up ladders, breaking through doors, moving heavy furniture, and drilling into the walls, the first of which leads into a waterpipe. 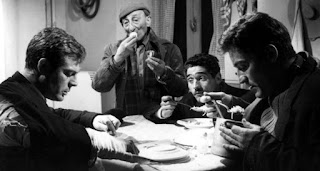 Pisacane, as usual, discovers tracks down a late meal, a large pot of pasta and chickpea soup which he describes to the others, still at work in their attempts to break down the supposedly paste-board structure, a delicious. Only after a longer period of hard efforts, do they discover that the wall they are slowly breaking through leads into the kitchen where their colleague is enjoying his soup. The sisters have evidently recently redecorated their apartment, moving the furniture.
Frustrated with their failures, and all wishing to return to the women and families they have left behind, they sit down with Piscane to enjoy the good soup before fleeing.
The next morning a bemused television reporter reveals the news that several unknown persons had broken into an apartment during the night to steal a pot of soup.
Given the long sentences these inept robbers would surely have suffered had they actually broken into the safe and absconded with its contents—we might even imagine that it could have been empty—we feel that the ending of this hilarious work is most certainly a happy one. Unlike Melville’s films, here there are no jewels to dispose of, no comrades to later dispose of. Cosimo’s tattered gang is saved by its own ineptitude.