nothing to be said
by Douglas Messerli

The four gay adolescents and 2 lesbian teenagers who are the subjects of Gregg Araki’s 1993 film Totally Fucked Up may describe themselves this way, but as the director makes clear in the 15 parts into which this truly rag-tag film is divided—reminding one a bit of Volker Schlöndorff’s  Baal—these kids are basically okay, while it is the society into which they were born that is a grotesque version of what a healthy world should represent. Certainly in 2020 we can relate to these terrible disoriented youths (Andy, Tommy, Michele, Patricia, Steven, Deric, and Brendan) who came of age in the time of AIDS—safe sex is constantly invoked, although it appears that few of them completely embrace it, the central figure Andy (James Duvall), at one point suggesting he practiced it with his new friend “mostly.” 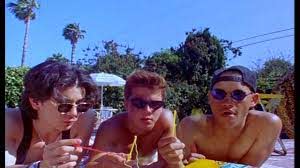 Clearly the young boys and girls of Araki’s work are troubled; they survive mostly at the edges of society, joining one another mostly at late night bars and in furtive meetings in their parents, homes; they regularly take drugs to get high, but not apparently Smack (heroin) or other highly addictive and potentially killer cocktails such as Captain Cody (Aceminophen), Apache or China Girl (Fentanyl), Fluff (Vicodin), Dillies (Hydromorphone), etc.; and the majority of those who are old enough for college, have skipped that opportunity, at least for the time being, most likely because of their familial financial situations. What they do have in one another is a kind of family that they cannot find in their own homes. The lesbians are deeply in love, and two of the boys, Steven and Deric (Lance May) are attempting a permanent relationship which, alas, is not completely working out. These boys are still too young and inexperienced, I would argue, to fall easily into life-long relationships.

The problems they must face together do not only in include AIDS, which forces them into tentative sexual explorations, but the hostility of their fathers and mothers—in one case, when a boy comes out to his parents, he is permanently thrown out of the house and must depend on others for temporary sleeping quarters—and, even more importantly, of the ignorance of the institutions around them, particularly at the highest government levels which have not yet come around to fully accept their sexualities or to properly fund AIDS research. At least, Clinton, in his second year is 1993, was not entirely deaf to these issues, as Regan had been at the beginning of the AIDS crisis or as Trump as been during the COVID-19 pandemic.
Yet, violent white vigilante groups regularly appear out of nowhere, with clubs swinging, to attack and possibly kill late-night gays walking without the protection of others. One of their friends is hospitalized after just such a beating, the group gathering in his hospital to demonstrate their love and support.
In the pages of LAWeekly and other newspapers and magazines that these adolescents read there is report after report of gay teen suicides, sometimes for the loss of their lovers to disease and, more often, just because of the isolation they feel from family and the society at large. If they are still in high school, as a couple of these boys are, they surely suffer some bullying from their peers.
The only ones lower on the societal totem pole, they sense, are the street teens who are totally drugged out or have had to live as male hustlers just in order to survive. At one point, Andy, witnessing a stoned-out kid next to a hat he has laid out for donations, asks his new-found lover, Ian (Alan Boyce) a college boy from UCLA, if he has a half-dollar to throw into the kid’s hat. When his boyfriend declares he has no pocket change, Andy himself pulls out a dollar and donates it to what his friend suggests is probably “just a scam.”
This is an important incident, I might suggest, in Andy’s—who is perhaps the most cynical of his friends, as well as a latent true idealist—education about the realities around him. At another point the same boyfriend, to cover up a phone-call from another gay friend, tells Andy that it was just his mother who calls from time to time, after which she writes out another check to her son. The brooding Andy, like his colleagues, has no financial fallback. If he has a small allowance, he spends it on cigarettes, beer, and candy bars.
Yet all of these dreadfully overlooked LGBT individuals (there was no category Q, queer of “questioning,” which actually might define Andy’s position in this film, in 1993) also dream of more normative possibilities. The lesbians both would love to have a baby—but without the male intercourse, a problem for them because they obviously cannot afford a sperm donation and implant—; the homeless gay guy claims to have found a cheap apartment in a questionable neighborhood; Steven (Gilbert Luna) wants to become a filmmaker; and Andy falls so seriously in love with his college boy pick-up who he has, so the movie hints, even allowed to be fuck him, something early in the film he found distasteful. It is he who declares on tape that things are “totally fucked up.” All of them, moreover, share their generation’s music, as does Araki’s eclectic score. 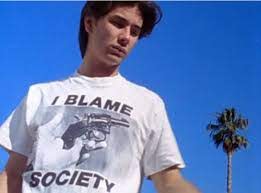 When he tries to visit his friend in his UCLA dorm, only to find him with another gay guy in bed, Andy’s fragile dream-world utterly collapses. Although he pretends diffidence, we know that this broodingly handsome boy will not just “get over it.”

At the moment we least expect in this tale of the rugged bonding between members of this outlier community, Andy mixes some of the most lethal of household cleaning chemicals, swallows them like a tantalizing milkshake and falls into a nearby swimming pool, dead.
The tearful last scene shows the remaining five gathered, again lined up on chairs in a hospital, with no longer any recourse to words—precisely how they’d begun this series of camcorder interviews, nearly all of them insisting that they truly had nothing much to say and even questioning the efficacy of such an enterprise.
Slowly the credits come up, their names in blue (again reminding us of the white on blue numbers that define the episodes of Baal).
This film was the first of what generally is described as the director’s Teenage Apocalypse Trilogy. Today is often appears as if both teenagers and adults were facing such an apocalypse that is perhaps even worse, all over again.