coming back to go away again
by Douglas Messerli

A day after watching Egoyan’s film Guest of Honour, I selected, completely by accident to see a Pedro Almodóvar film that I had previously missed, High Heels, or more properly given its Spanish title, Tacones lejanos, Distant Heels.
I describe this viewing as accidental simply because of the kinship of the Almodóvar work with the Egoyan film, both employing as their dominant genre, melodrama, and the focus in both films
upon the sometimes-lethal relationships between young girls and their fathers and mothers.
A motivation similar to the central figure of Egoyan’s work—in which the young heroine “kills” her victims only symbolically—lies behind the young Rebeca’s (Victoria Abril) actual murder in High Heels of her step-father, who has abusively treated her mother and threatens to divorce her. Rebecca’s second murder of her own husband—perversely her mother, Becky del Páramo’s (Marisa Paredes) former boyfriend—derives from parallel issues, with Manuel abusing Rebecca and threatening divorce.
In both films, moreover, the daughters suffer enormously over what they feel is the loss of love of their parents, the cheating father in Guest of Honor and the famous but always absent singer-mother in High Heels. 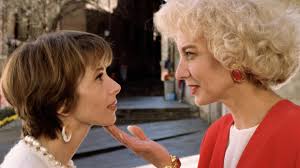 The early part of the Almadóvar’s film, in fact, seems to set out the director’s recognizable landscape of LGBTQ concerns. Rebeca, so it appears, has become enchanted by a transvestite performer in a local club, Lethal (Miguel Bosé), whose major song is a tribute to her own mother earlier in her career, Agustín Lara’s “Piensa en Mí,” and has grown so fond of the performance and performer—whom it is clear that her macho husband abhors—that she helps her change costumes for the next act. I’ll come back to that in a moment.

Later, when Rebecca ends up in prison—in another parallel with Guest of Honour—we witness several lesbian relationships at play and, in a moment of sheer magic, an all-female prisoner dance to a merengue by Los Hermanos Rosario, which reminds one a bit of the female sharks’ dance in the original version of West Side Story.
But immediately after, the usual Almodóvar themes are somehow lost, as the sexual proclivities of his characters become far less important than the affinities of gay men to directors such as Douglas Sirk and the appreciation of films from the same melodrama genre such as Stella Dallas, Mildred Pierce, and particularly Imitation of Life—the last a film which High Heels, to a great degree, even imitates, particularly when we recall that the daughter, Cheryl Crane, of that movie’s star, Lana Turner, stabbed to death her mother’s lover, Johnny Stompanato. And, of course, how can we ever forget Christina Crawford’s 1978 memoir, Mommie Dearest, which almost did in her famous adoptive mother? These incidents too hover over Almadóvar’s story.
To explain her own horrific relationship to her mother, Rebeca recites a great deal of the plot of Ingmar Bergman’s An Autumn Sonata, in which a great pianist returns home after a long absence; asking her daughter to play a song for which the elder has become quite famous, following up the girl’s performance with an intimidating critique. 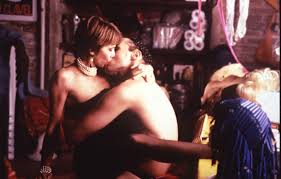 But let us return to Rebeca in the dressing room of the transvestite Lethal, who, upon catching a glimpse of his obviously well-endowed genitals, allows herself the enjoyment of having sex with him/her, at which time, we soon discover, Rebeca is impregnated. It’s difficult. after that moment, to see Lethal as one of Almodóvar’s more fragile if street-hardened transvestites. And the lesbian relationships of the prisoners seems to go nowhere, until one of the girls attempts to buy a jacket from another, which just happens to be the loyal nurses’ boyfriend Hugo’s identifying wrap. Presented with a nude picture of Hugo, Rebecca recognizes him as Lethal from the birthmark on his penis.
A sympathetic judge, Eduardo Dominguez, who only superficially interrogates the mother and daughter—lover (now both former and, since Becky has started up a new affair with Manuel current) and his wife about the murder—he finds no convincing evidence, and without explanation releases Rebeca from jail—despite the fact that Rebeca has confessed to the killing on television!
Invited to the last performance of Lethal’s act, Rebeca reluctantly attends, finding in the dressing room not only Lethal and Hugo, but the Judge, whose sartorial beard and side-burns, it turns out, are only part of another costume. He vaguely attempts to explain that his drag-self was created in order to track down a murderer of transvestites; but the more important thing he offers up is his desire to marry her, since they have already begun a family of sorts, he diffidently adds.
If both Rebeca and Lethal/Hugo/Dominguez have kept a few secrets from each other, so too has the girl’s mother, Becky, as they soon discover that she has returned to Madrid not to seek out her long-abandoned daughter but because she is suffering from a serious heart condition.
At the hospital, she privately asks Rebeca once more if she actually murdered Manuel, since her daughter has confessed to it and then denied the confession. Yes, Rebeca answers, I killed him. One of the best lines of the film is Becky’s response: “You really have to find a new way to deal with your problems with men.” 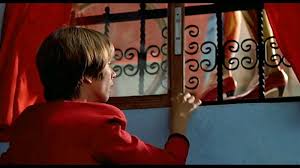 About to die, the mother herself confesses to the murder, ordering up the gun in secret to make certain her handprints are pasted upon in. The two then settle down for a final talk, Rebeca describing how the sound of her mother’s heels approaching always helped to sleep; in the original, it is the sound of her mother’s heels after she has returned and is moving back down the hall that reassures the child. The distance of those heels is important because it is only out of the mother’s all-enveloping shadow, that Rebeca can return to normal life.
While she speaks, she soon discerns her mother has died. And perhaps it is only now that Becky has retreated for the last time, that in a marriage to Dominguez the daughter may come into her own.
We can only have some doubts, however, given the fact that her new fiancé has a strange relationship with his own rather overpowering mother, who spends her days in bed creating celebrity scrapbooks, while complaining of all the illnesses she has imaginatively contracted—the most recent one being AIDS, which worries her about her son’s undercover activities. It’s a sly reference to the fact that perhaps this family tale is only a hiatus from this director’s usual concerns. A few years later, in All About My Mother Almodóvar, in fact, made one of his best films that might almost be described as oddly connected to High Heels.
Although popular in Spain and Italy, High Heels was highly unpopular in the US and elsewhere.

The day after writing this review, while scrolling through my Facebook friends, I coincidentally came upon a still of yet another female child murderer, Patty McCormack with her director Mervyn LeRoy during the shoot of Bad Seed. Evidently some of my friends were playing a sort of cinematic game, posting actors with their directors without name to see if their friends might be able to identify them.

Posted by greenintegerblog at 11:21 AM