Volker Schlöndorff (writer, based on the play by Bertolt Brecht, and director) Baal / 1970

It’s little wonder that Bertolt Brecht’s first full-length play of 1918 seldom is revived. As actor Ethan Hawke, echoing the viewpoint of playwright Tom Stoppard wrote, “If you do Baal right, then no one can like it.”
To do it wrong, to allow the wandering poet who utters inanities filled with romantic metaphors and similes that speak of the beauties of nature, the strength of trees, the tender drips of water off their leaves, etc. etc.—which the central figure spouts as lines of wise significance to, in this case, taxi cab drivers—is to make the drunken, misogynist, murderer, and social fiend, a kind of Nietzschean hero, a criminal who stands outside the law and apart of any decent human standards of behavior.
Hawke definitely had a role in preserving the Television movie, directed by the great German filmmaker Volker Schlöndorff. After seeing the original at the Cannes Film Festival, Hawke inquired about it, with Schlöndorff responding that—once Brecht’s widow, Helene Weigel, angered upon seeing it on television, had immediately pulled the rights, allowing no more performances of it—he canned the banned film and no longer knew of its whereabouts.
Eventually, the film was rediscovered in some rusty film cans labeled simply “S.” Restored, this film was eventually re-released on the august Criterion label, whose site I visited to the other day to watch it.
At least to my way of perceiving—I have never seen a stage production of the play— Schlöndorff got it just about perfect, despite Weigel’s abhorrence of the work. Eric Rentschler, a scholar of film history describes the work as both “fascinating and difficult,” which is what I might argue is the telling this play deserves.
Critic Michael Barrett speaks interestingly of Brecht’s pre-Marxist intentions in writing the drama in response to the expressionist writing The Loner (Der Einsame) by the soon-to-become-Nazi dramatist Hanns Johst, whose work lionized just such a disgusting figure.
Film critic Michael Barrett further illuminates us with Brecht’s own youthful thinking:

Writing just after WWI had eradicated a generation, and in direct response to…Johst's The Loner, Brecht's episodic drama illustrates a double-bind for the original artist. One can either submit to the pampered success of patrons and official approval, or one can be untameable. In the latter case, however, the result isn't a valiant hero but an antisocial, indulgent wastrel "beyond good and evil" (to coin a Nietzschean phrase), living outside the bounds of polite society until he chokes on his own vomit.
… Brecht was about nothing if not alienating his audience, by which he meant a kind of emotional insulation against being swept into a satisfying escapist drama. He employed various devices to distance the audience from the drama, the better to analyze its messages critically and intellectually, not emotionally. In the case of this almost random collection of scenes, he provides heightened poetic language and songs amid the depiction of the squalor of his anti-hero, the least of whose qualities is that of the reckless womanizer. "Baal" happens to be the name of a demon or a god of storms and fertility, and the play is a famous case of the god spelled backwards as dog.

Since Schlöndorff’s film, true to Brecht’s original, presents itself as a series of episodes, each of the 26 numbered and stamped in white upon a blue background, I see no need to provide a complete 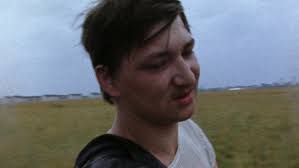 narrative of the work. Let us just say that from beginning to end, Baal—acted stunningly by director Rainer Werner Fassbinder—grandly communicates, at least to his way of thinking, with nature, which mostly appears to be wallowing in the mud with his various lovers.

Rejecting the fawning bourgeois publishers who, having just “discovered” printed versions of his work, all of whom obsequiously seek to publish it, Baal makes it clear that he is only interested in stuffing his mouth with their food, excessively drinking their champagne and liqueurs, and stealing the heart of one of the publisher’s wife. Like all women he meets, he treats her abysmally, finally 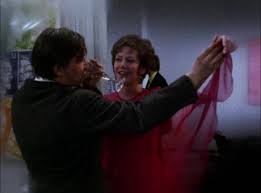 pawning her off to another acquaintance just to rid himself of her.

Indeed, it is difficult to know what magical qualities all of the women and men who come into contact with him have discovered that we cannot imagine. One is simply tempted to suggest, perhaps, that it is the same kind of cult following that tracks many such monsters, including those attracted to Hitler, Stalin, or even today’s Trump—a following that is self-destructive in their imaginings of what this demon might provide them.
After Baal impregnates a young virgin, Johanna (Irmgard Paulis), beloved for her purity by another of Baal’s acolytes, she is thrust away as a “millstone round his neck,” forced with noone  else to turn to, to throw herself into a local canal from which her body is never recovered.
A third woman, a bartender named Sophie (Margarethe von Trotta—who soon after became a co-director with Schlöndorff, later married him, and ultimately went on to become one of the world’s major feminist directors) plays another of Baal’s spurned pregnant mistresses. He leaves her by a roadside to have her child without him. 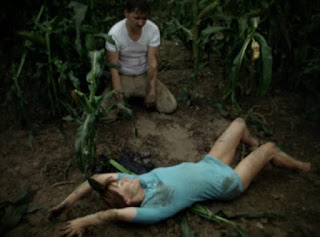 By this time, moreover, the monster has been seemingly involved with the death of a seasoned logger, who may or may not have been tied to a tree when it fell upon him.
Just as importantly, he has met his male lover Ekart (Sigi Graue), a nearly mad who attempts to create symphonies with a tuning fork. Yet, it is clear that Ekart is the only one who evokes any true love from Baal. Baal not only tells him that he loves him several times, but is seemingly jealous of his friend’s occasional sexual dibbling’s with the opposite sex. In a bar where the two have stopped to celebrate with champagne (and in which Sophie with her child now works) he finally encounters Ekart in the midst of copulation with a woman in another corner of the dark room, and stabs him to death. The only being he loved, it appears, is now dead, and Baal is once more on the run. 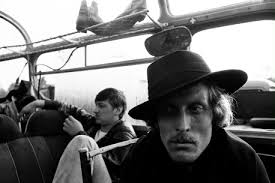 Feverish and dying, Baal finally takes refuge in the logger’s hut, cared for and mocked equally by the lumbermen with whom he once briefly worked, and who still resent his possible involvement with their colleague’s death.
When the loggers are called to work, Baal is left alone to die, and attempts in his fear and horror to return to his supposedly beloved nature. He dies only a few feet from the lumbermen’s hut, neither mothered by nature nor mankind.
Beautifully filmed by cinematographer Dietrich Lohmann and with more than serviceable music by Klaus Doldinger, Schlöndorff’s film is both totally fascinating, if for no other reason than the endless trajectory downward of Baal and all those who meet him, and difficult, in this case simply to bear the absurd hero’s abuse of all those with whom he comes in contact.
Although Fassbinder had only done one movie at the time of this film, he brought some of his soon-to-be continuing cast members, including Hanna Schygulla, to perform in his fellow New German Cinema director’s production. On set, he also met, performing in a bit part, Günther Kaufmann, who would later become his lover.


Posted by greenintegerblog at 8:46 AM