the second coming
by Douglas Messerli

It says a great deal about the changes in LBGTQ filmmaking when one is suddenly faced with a film in Quechua—my first. It’s more than fascinating to know that even in a community in Quechua-speaking Peru a 14-year-old boy might suddenly be faced with the painful difficulties of finding his way through emotions that do not fit into the normative values of his society. 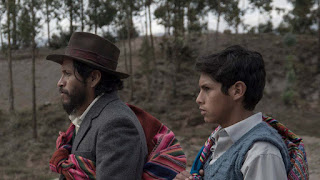 Yet in Álvaro Delgado-Aparicio’s 2017 film, Retablo, it is not the boy, Segundo (Junior Bejar) who—at least at first—is haunted by his sexual urges, but his artisan father, Noe (Amiel Cayo), whom the boy, riding to the nearest town in the back of the truck in which his father is seated up-front, discovers, upon briefly parting the canvas barrier, giving fellatio to the unknown driver.
It is so quick of a glimpse that perhaps even some of the theater viewers might not immediately recognize its significance. Yet Segundo, having grown up in this violent and homophobic society living at the foot of the Andes perceives immediately just what it means and, despite his love and admiration of the man preparing him for a career as a “maestro,” the term by which all of the natives address the elder, recognizes it as something so shameful that he cannot even think of, let alone speak its name.
The voyage they are making is a fairly regular one to the nearby village to sell his father’s “tourist” retablos—small wooden framed structures, a assemblage brightly painted with traditional motifs that when opened, a bit like the doors of an apartment building, reveal shelves containing small likenesses of people, sculpted out of potato dough and, once again, brightly painted to represent their local costumes. These tourist versions of the grander 4-feet high constructions bearing the likenesses of real local families who have commissioned them are the major source of income for Noe’s poor family, who themselves live in a far less grandiose world in a stone hut with dirt floors. Their major source of food are the potatoes themselves and, perhaps an occasional lamb which they also raise as a source of milk and whose fleece provide them with clothing and blankets. 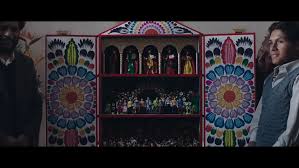 In the first scenes of this film we have watched the father and son working in their nearby studio, wherein Noe is slowly tutoring Segundo on how to create this nearly sacred peasant altars. Segundo is not only a good and loving student, but you realize at first sight, just how appreciative this sensitive boy is to have the opportunity to create something of beauty and meaning as opposed to the hard labor available to others such as his nearby friend Mardonio (Mauro Chuchon), the son of a pig farmer who dreams of running off to the cotton fields where, he insists, women are nightly available, like the cotton itself, for the plucking.


His bragging machismo along with his and his friends’ sudden shifts from playing soccer into sometimes brutal brawls, is the only thing the far gentler Segundo knows of what he supposes is standard male behavior, except when his father, increasingly until the denouement of Delgado-Aparicio’s film, comes home drunk, sometimes unable to find even his own bed to which Segundo’s loving mother eventually guides her husband.
In an earlier trip to the village, the two encounter natives nearly flaying a man, who simply as a stranger, an outsider to this also xenophobic world, is suspected of cattle rustling. Later, in a day of celebration akin to Mardi Gras, the locals, donning horrendous looking masks, play out in theater productions and in all-male battles involving leather belts demonstrate their quite obvious internal aggressions. 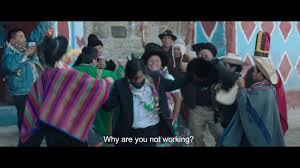 The only woman who attracts Segundo is the town grocer, who in admiration of the “maestro” always saves some of her best produce and sweetly smiles at both father and son. Later, after witnessing his father’s sexual act, Segundo becomes determined to prove his own sexuality,  breaking into her home while she lays sleeping, presumably to rape her or, at the very least, to gain entry into her bed.
Yet, the boy can do little more than stand beside her bed for a few moments before running off in despair. In his mind, he has failed the test, while in the observer’s view he has simply proven himself as someone removed from the brutal enactments of the society in which he has been raised.
Indeed, much of the middle panel of this, a bit too obviously segmented cinematic triptych, consists of Segundo “acting out,” the way any young teenager might, his angst over his father’s behavior and his fears for what it might mean about himself. For this boy the time has come, as it must for most children, in which he must negotiate the differences between the voices of his peers and those of his parents. At the celebration, Segundo runs off after witnessing the male-on-male battles to an old stone building, either a former center of government or religion, removing his sandals and painfully cutting his feet against the outcropped stones, an act which might be said to resemble the knifed arm and hand carvings suffered by disturbed young men and women in more urban communities.
After that last trip into town, Segundo refuses to return to work with his father in the studio and often goes missing for long periods of time, at one point insisting to his mother that he intends to join Mardonio as a cotton picker. The confounded woman kindly insists that if he does so he will be undoing everything his father has attempted to provide him, the life of an artisan instead of a peasant.
It is only when Noe arrives home so terribly beaten that he is near death that Segundo begins to come with terms with his and father’s relationship, in which he can only fear may force him more in the direction of his father’s behavior than those of the general community.
When his mother demands that he immediately run to the neighbors for help, Segundo does so only to be shunned, Mardonio and his father both reporting that Noe had been caught having anal intercourse with a man, whose relatives beat his father with the intention of killing him.
Returning home and to the studio where he suddenly perceives the sometimes open and howling mouths of many of his father’s hidden retablo, that perhaps for all these years Noe has recognized the horror of his neighbors’ close-minded values. 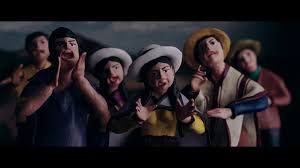 When his mother demands to know why the neighbors haven’t arrived, Segundo can only mumble that they were not at home, in response to which, she herself, with her crutch in hand, makes the trip to fetch help.
Her return is far more violent than Segundo’s simple horror, as she enters her husband’s studio like the mad Lytta (related to the the Maniae, the spirits of madness and insanity) of Greek mythology. With furious swipes of her arms and hands she wipes away nearly all of her husband’s creations, allowing the retablo and their figures to fall broken to the floor.
Soon after, her mother arrives and they begin to cook and pack up for their journey to another region, far away from where they will now ever after be shunned.
Segundo cannot assimilate that possibility. As he nurses his ailing father, he insists that they still have enough potatoes left for the dough for new figures and that they are still owed for the last retablos they have placed on commission in the village. Carefully, he attempts to retrieve any of the figures and wooden structures which have survived her revenge.
Pulling away from them as they pack up, Segundo sits on a nearby hill, refusing to respond to their calls for him to join them as night approaches on their long journey away from a world in which they can no longer exist.
Still caring for his father, the boy packs up a retablo with the intention of selling it, but, met along the way by Mardonio and his soccer-playing bullies, he is mocked by his former friend who beats him, bloodying his nose and destroying the large retablo. For the first time, Segundo himself releases his fury, tripping Mardonio as he turns to leave, and slapping him over and over again in his face. We can only take some small pleasure in Segundo’s final coming to terms with the world around him; yet, at the same time, we are horrified that he too might have now become a member of the society which he, Noe, and his have previously shunned.
Segundo returns home knowing now that there is no possibility of ever again finding some version of normality. Arriving in his hut, he sees that his father has disappeared and hearing the far-away bleating of their lambs, realizes that Noe has left the yard. He finds his father’s body hanging in the nearby well.
Once again entering the studio, Segundo creates his own small retablo, showing his father as a teacher while the son sits below him, creating still unpainted and unformed villagers below, a gift which he places gently into his father’s pine coffin before buying it.
The director could not have provided a clearer statement of what lies ahead. This boy’s future in society is still something unformed, like the pristine white clay which he and his father worked into shape before painting eyes, hair, mouths, and the multi-colored clothing upon the small icons.
Packing up the paintbrushes and the few pieces of wood and figurines undestroyed in this symbolic devastation of his world, Segundo moves on and away in a direction opposite the route his mother took. He too will need to move into another still unknown world where the sins of the father—if in fact they are sins—will no longer hinder the development of the son. But in taking on his father’s avocation, with both its sacred and profane elements, Segundo, has become, like the second “one” whose name he bears, a kind of Christ hopefully redeeming the new world he encounters.

Posted by greenintegerblog at 6:48 AM