Garçon stupide (Stupid Boy) by Swiss director Lionel Baier is a film I tried hard to like. In the end, however, I simply felt that Baier’s work simply allowed too many illogical elements into its otherwise basically simple structure that bares a close resemblance, in parts, to Eliza Hittman’s 2017 Beach Rats: the story of a working class kid who, pulled by different forces, has difficulty in coming to terms with his full potential as a being, both sexually and intellectually.
Both have sex with older men; but we know, at least, why Hittman’s young character has chosen such unattractive companions: he wants to be certain that his sex life is undetected by his homophobic, heterosexual friends. In Baier’s film it is never explained why the attractive Löic (Pierre Chatagny) seeks out chatroom connections with such physically unattractive men. 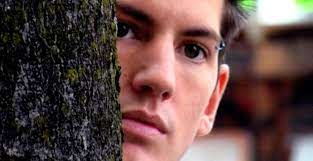 True, he is nearly nymphomaniacal with regard to sex, which might encourage us to imagine that he is completely disinterested with deeper relationships with others. And we do perceive that he treats sex as an almost clinical act, immediately defining upon meeting his partners what is or is not permitted, and then snapping pictures of the man who he has fucked or has been fucked by, as if he were almost cataloging a show about the gay “species,” the kind of display the local museum in which his female friend (Natacha Koutchoumov) works might be interested in if they ever decided to turn their attention away from geological exhibits.
Yet, that doesn’t quite explain his sexual preferences. In my younger day, at least, there were plenty of cute boys ready to jump in bed with no intentions of forming a relationship or seeking any commitment whatsoever.
And if Löic has absolutely no interest in relationships, why does he let one elderly liaison, a man who we never see—not even in the boy’s snapshots—continue to meet with him while asking his young friend only questions while insisting that he is not interested in the boy’s thoughts, not in his body? How to explain, moreover, the man’s seemingly pointless attraction to this rather empty-minded, certainly uneducated—he is, in some respects, truly “stupid”—young man who, at one point, even physically threatens him, pulling him into a bathroom stall to offer him the sex which Löic is convinced his elder is really seeking?
Even if we presume that the stranger is actually a “stand in” for the man the boy has grown up to be, interviewing, as I suggest by my title, his younger self, where does this rather radical intrusion upon the otherwise basically realist plot, take us? Can an elder version of a self truly remake the younger? The impossibility of that transformation is something that has been lamented since the earliest records of mankind. Let us just describe it as a rather odd structural device from which Baier’s gentle bildungsroman never quite recovers.
Why, moreover, is the boy refusing to eat; he suggests that he is saving money for something special, but whatever, given the limited confines of current imagination, could that possibly be? I’ll come back to that problem later. It is even more strange that he has given up eating when we soon after discover that he works for a major confectioner of Swiss chocolates, wherein his job is to lift up each large  plate of stamped-out chocolates in order to make certain that the scores between the smaller chocolates are still intact. 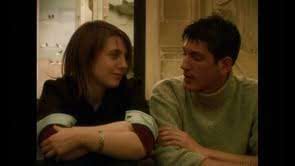 Let us now return to the girl, with whom, given her largesse, he lives. One might simply describe her as what used to be called in the old days of bigoted gay parlance, a “fag hag,” a woman who stands by the man with whom she knows she will never have sex. Yet, in this case, when she appears to find a man of her age and intellect whom she might date, why does our young sexually obsessed boy grow jealous or even imagine that he might be transitioning to heterosexuality—particularly given what we have been shown is at the other end of those obsessions, the male body? 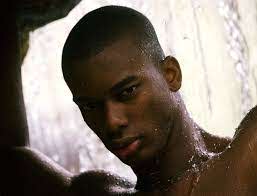 Charting even stranger territory, the director concocts yet another compulsion for his young hero: upon reading of a new soccer player from Africa who has joined the Bulle team, Löic is not only intrigued by his new hero and his quite traditionally respectable family, but soon begins to stalk him, attending a match of the sport about which he obviously knows very little and trying to meet the new player.

His female friend, because of his continued judgments about her own life, sends him packing, which means that he must spend his nights sleeping in the shower-room of the manufacturer for which he works.
But then why does this confused young man later return to her apartment where he finds her, if the film’s promotional department is correct, dead after having committed suicide? Why, instead of reporting the event, does he steal her car—which she has rather unsuccessfully been attempting to teach him to drive—spin off into the nearby mountains where he crashes it?
Let us imagine that his encounter with the soccer player, who seems to be visiting a second home there with only his young daughter, is a fantasy arising from Löic’s head injuries as he lies upside down in the car half-way down the mountainside. Why turn those events, however, into a series of highly naturalistic conversations with his new hero that help to see that he is nothing if he does not enact his fantasies, and that to be a true sports photographer he must purchase a film camera (the previously unknown reason for the boy’s attempt to save money)? Surely no one stranded so precariously in a wreck has ever experienced such a logical progression of imagined interactions that help to define the rest of his life?
Other questions arise: why briefly introduce his parents, who seem like a sweet if unperceptive Swiss couple, if the boy’s relationship to them is barely established. He snarls while they quietly eat, I suppose to suggest his hostility to the pair. And how does visiting an amusement park truly give our hero a true perspective about people which he might use in his later efforts of filming? All right, in that last scene I’ll even grant that Löic encounters a kind of joy he has never before known and possibly meets a young boy closer to his age who represents someone who might provide him with a different perspective of life.
Yet, the numerous voids in this film’s narrative are never filled, and we are left with pure speculation of a truly “impressionist” vision of the world Baier is attempting to represent.
At least this very last suggestion is hinted at in the movie itself, in which Löic overhears one of his elderly dates mentioning Impressionism and quickly looks it up in the Encyclopédique Larousse. The brief and vague definition it offers him is itself a kind of “impressionistic’ notion of what the art and literary movement represented. The boy accepts it, nonetheless, as a true definition of what he is trying to recreate with his camera, and, by film’s end, his future cinematic attempts.
Perhaps the director is suggesting that the simple interplay of light and color, the vaguely defined outlines of objects and events is the only way to describe this portrait of a young (would-be) artist. Yet in the outlines of this “stupid boy’s” path into enlightenment the narrative holes the director’s camera creates might be better described as something like Alice’s drop into the rabbit hole where reality is turned on its head.