Charles Chaplin | Behind the Screen

slinging forbidden love along with the pies
by Douglas Messerli

To describe Charles Chaplin’s 1916 film Behind the Screen of being a “gay film” would be to highly misrepresent it. Rather, it is another of his on-screen love trysts with Edna Purviance—who appeared in 33 Chaplin films and with whom Chaplin was long romantically involved.
I included it in my volumes of Queer Cinema simply because it reveals some of the attitudes toward gays that existed even in pre-code Hollywood, at a time when some sophisticated directors created far more complex subtexts around LGBTQ behavior without having to apologize for it or risk having their films censored.
This Chaplin film, distributed by the Mutual Film Corporation, foretells much of what later would become the heart of the pre-talkie satire in the Gene Kelly and Stanley Donen film of 1952, Singing in the Rain. As in that later film, the studio Chaplin works for, playing a stagehand named David, shoots various kinds of movies simultaneously, allowing Chaplin to mix a biblical drama, with a western, and a pie-throwing comedy in the manner of Mack Sennett.
The assistant stage-hand David works for Goliath (Eric Campell) who might easily carry about the Byzantine-like columns, couches, chairs, and other props that, while he dozes off, David must struggle with. (It’s fascinating to note is how much the numerous chairs that David gathers up, all 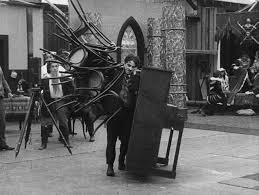 with their legs pointing out, reminds one today of the coronavirus, attacking all it comes into contact with including the tripod camera—whose cinematographer suffers his device’s regular collapse from Chaplin’s back and forth shuffles from room to room.

David is put to work so busily that when we discover that there is a entire crew of stagehands, we are a more than a little surprised. They appear, evidently, only at lunchtime, when the morbidly overweight Goliath pulls out 12 pies, consuming every last one, while the others chaw on chicken breasts so large that one might imagine they were actually a portion of some dinosaur relative, and such a quantity of onions that David, attempting to bite into his three small slices of white bread, is forced to don a medieval headpiece in order to escape the smell.
Immediately after the large quantities upon which the other stagehands dine, they, like Goliath, fall asleep, and when awakened by the studio director, go on strike for his intrusion upon their “sacred” time. Later, in revenge, they succeed in dynamiting the place into ruins.
There temporary departure leaves the door open, obviously, for the appearance of Purviance, who previously attempted to get a job as an actress, but now perceives that at least she might join those “behind the screen” by donning one of the missing stagehand’s, pants, shirt and hat—making her appearance as one of the first of the silent screen’s cross-dressers.
Previously, we might have wondered a bit about David’s rather natty attire—particularly since Goliath and the other workers are dressed like Shakespeare’s rude mechanicals of A Midsummer Night’s Dream—but then we have gotten so used to the “tramp” that even before that character’s existence we are not surprised to see his David in a tie, vest, coat, etc. as if, like all Chaplin figures, he were aspiring for the role of a legitimate gentleman. 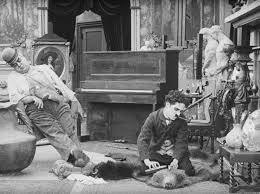 Yet Chaplin takes this a bit further when, as the intertitle tells us, he applies “the finishing touches” in dressing a scene, in this case acting as a kind of hairdresser as he meticulously massages and grooms the hair of a bear rug.
Later, after Goliath has hired the new “stagehand,” David comes upon the young boy playing a guitar somewhat flirtatiously before standing up to apply, in a moment of forgetfulness, a powder puff to his cheeks. For a second the assistant stagehand seems almost delighted by the new boy’s attentions, but soon after mocks the character with a playing out of effeminate behavior, fanning his face, winking he eyes, and flinging out loose wrists as he dances by while raising his pant-legs, as if to suggest what Texans will later describe as Purviance’s character as being “loose in the loafers.” 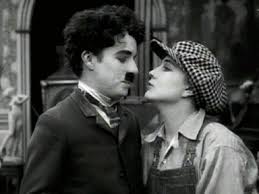 When soon after, however, he accidentally knocks off the boy’s hat, allowing Purviance’s long blonde hair to spill out, he suddenly realizing that he is really a she, immediately attending to her more carefully, assuring her he will keep her secret while allowing her to plant a couple of appreciative kisses on his nose and lips.

Goliath, appearing at the very moment when David fully kisses her back in response for her feminine attentions, simply presumes that his protégé has—as Cary Grant would later proclaim in Bringing Up Baby, “just gone gay”—preening and dancing off in his own hefty mockery of homosexual love.
Chaplin’s film takes these misunderstandings no further. The rest of the work is filled with trapdoors being open and closed by David as he drops and locks out actors, director, and Goliath alike.
The film ends with the comedy director’s attempt to try out what he describes as an “experimental” scene, “something never done before," which consists of a long pie-throwing contest between David and Goliath that ends with the pies flying into the faces of the nearby biblical cast members. As expected, working behind the scenes, David has finally slain his Goliath and probably gotten fired along with his new-found lover, whether she be a man or a woman in drag no longer of any matter.

Posted by greenintegerblog at 7:02 AM