the fatalist
by Douglas Messerli

Cosima Spender’s film Without Gorky is truly a family affair, but don’t imagine that you’ll encounter in this fascinating work something similar to a living room projection of what fun it was to be part of the Gorky tribe. This rather somber film is something closer to the homemade films of The Friedmans of Andrew Jarecki’s Capturing the Friedmans without any of the judicial accusations that accompany the father and son of that film. 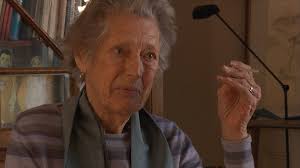 Here the accusations, rather, are muted, almost at times inexplicable, as Cosima interviews her grandmother, the now famous painter Arshile Gorky’s wife, Agnes “Mougouch” Magruder, a woman liberated years before such a concept might even have existed. Rolling her own cigarettes while recounting her more-than-painful later years with the artist, she, the daughter of Admiral John Holmes Magruder, Jr., was—as the cliché goes—almost swept off her feet by the dashing storyteller who, in his early days, Gorky was.
Close friends with artists Roberto Matta, Wilhelm de Kooning, André Breton, Marcel Duchamp, and many others, Gorky introduced her not only to a high-powered art world, but, mostly on foot, to the New York City which her soon-to-be husband loved. 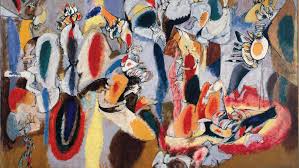 Working out of a large studio near Union Square, Gorky painted up a storm of portraits (including the famed works of the artist and his mother) and early abstractions before the impact of the Abstract Expressionism which later gained him, after his death, great fame.
Mougouch (an Armenian term of endearment) soon married him, but with the birth of their first-born daughter, Maro, found life difficult living with a child—and soon after a second daughter Natasha—in a working artist’s studio. As Maro explains, “he let me paint on the back of his canvasses, but when, on occasion, I tried to move to the front, he grew furious.”
Much of their mother’s time was spent in parks and on the busy streets daily attempting to entertain her children until she might return home to eat dinner. 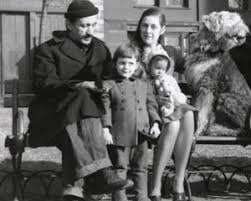 Gradually, the family, through temporary loans by friends of country houses, was able to split its time between New York and Connecticut, the later far preferable to Gorky’s wife and children, while lacking for the artist the intensity of the city and his interchange with his artist friends. Although, he there worked to free himself, by immersing himself in nature, of his former practice of sketching and working with smaller paintings before tackling the larger canvases, thus creating a new excitement of directly applying paint to canvas without any preconceptions, Gorky found his temporary locations could not compare with his orderly studio.
Both their mother and her daughters recall the heated arguments between the couple, along with Gorky’s increasing abuse of alcohol. In 1946, a series of serious health problems occurred which brought the family into further crisis.
Gorky’s studio barn burned down in a fire, taking with it numerous of his most recent paintings. The artist seemed almost fatalistic about their destruction; as we later discover, he was doomed by birth to become a kind of fatalist. But soon after he was forced to immediately undergo a colostomy because of developing cancer, which further exacerbated the fraught relationships between Mougouch and him.
For her part, his wife recognized that he was considering suicide, and whenever she saw him carrying about a rope, hurried the girls out to greet him and bring him inside. Nonetheless, things grew even more difficult, in one instance Gorky “helping,” as his wife puts it, her to tumble down a narrow flight of stairs from their bedroom. 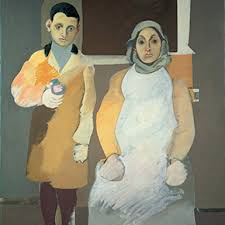 In the process of filming, Cosima takes her aunts back to the house, which in Maro’s case brings memories that are simultaneously lovely and horrific. Nathasha, on the other hand, can recall nothing—except for the stairs, which ends, for her, in tears, frustrated that she has clearly blocked nearly all memories from her mind, but also momentarily growing inexplicably frightened by the image of the staircase.
That event, in turn, brought a series of even more frightful turns. Terrified by her husband’s violence, Mougouch returned to New York, spending a weekend of reassuring love with Matta. When she arrived back in Connecticut, Gorky was ready both to beat her and possibly kill his artist friend. His sister, with whom he was in regular communication, insisted “In America we do not beat our wives,” and after a few rounds in Central Park, Gorky and Matta sat down on a bench to discuss the situation between them.
Unfortunately, soon thereafter Gorky was involved in an automobile accident with his gallerist Julien Levy at the wheel. Gorky’s neck was broken and his painting arm paralyzed.
Soon after, Mougouch took the girls and left Gorky, who committed suicide by hanging in 1948 at the age of 44, at the very moment when audiences and critics were finally beginning to notice his great achievements in art.
It is clear from the tensions in the interviews and conversations that Cosima films that Maro, now a painter herself, was never quite able to forgive her mother, particularly since Mougouch sent both her daughters to a strict Swiss boarding school, while she continued an affair with Matta.
Natasha, in particular, was almost daily punished for wetting her bed at age 3.
Yet through their conversations in this film, at least Maro begins to realize just how difficult Gorky was to live with. Moreover, in the years since the entire family has come to realize that numerous things the artist had told them about himself—for example, that he was the great-grandson of Maxim Gorky—had all been lies. As more and more art shows were organized they came to discover that their father’s real name was Vosdanig Adoian, and that his family lived in Armenia, forced to take part in the Turkish-led marches away from their homeland which led to the murder of millions of individuals, including Gorky’s mother who died of starvation along the long trek. 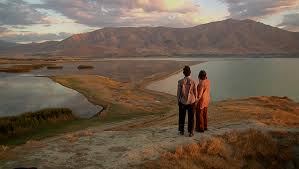 Late in the film, Maro with her husband sculptor and writer Matthew Spender (the son of poet Stephen Spender) and Natasha travel to the original home of the Adoians in Khorgom, Vilayet of Van. In that beautiful landscape nestled in low-lying hills which catch the afternoon shadows and filled with flowers and shrubs they recognize what might have a child’s eye-level view of the world he painted in abstraction again and again throughout his later years. Exploring a home similar to one in which their father and grandfather might have lived and witnessing the very splendor of Gorky’s childhood world they seem to come to some sort of reconciliation, however brief, with the failures of both their mother and father, now able finally to embrace their lives without Gorky.
This is not an easy film, for either Gorky’s family nor for the viewer, but along with the visual presentation of many of his great works, we do gain a new appreciation for the man who rejected all of his painful past just to come to the US and be embraced by the new culture. Unfortunately, as they muse, he did not live long enough to witness that.*

*My husband Howard N. Fox began his curatorial career at the Hirshhorn Museum and Sculpture Garden in Washington, D.C. working with Cynthia Jaffee MacCabe on a show of artists who had come to the US with the same hopes and desires that Gorky had, The Golden Door: Artist-Immigrants of America, 1876-1976, a show in celebration of the American Bicentennial, including more that 200 artists. The first thing that fell out of the catalogue when I opened it up yesterday to explore its wonders was a black-and-while photograph of Gorky’s The Artist and His Mother from 1926-1929, obviously a reproduction to be used by newspapers and magazines. I recall that painting from the show along with many others.

Posted by greenintegerblog at 12:32 PM