another day
by Douglas Messerli

If you can believe that Sophia Loren is a somewhat frumpy housewife and Marcello Mastroianni is a homosexual about to be shipped off to Sardinia by the Fascist government, the two of whom meet in a large public housing complex nearly emptied out by the fact that on their “Special Day” Il Duce is meeting Hitler for a public celebration of their new political pact; and if you can imagine that this unlikely couple—who accidently collide in that vast apartment building because of the escape through an open window of Loren’s pet myna bird—find a moment a solace apart from their own desolate lives through sex (and as someone who has just watched this 1977 film directed by Ettore Scola I believe these fictional circumstances completely) then you are in for a poignant 106 minutes of cinematic delights. 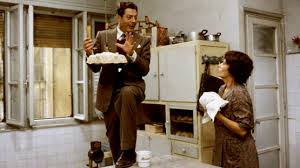 Even when I admit, moreover, that Scola’s film does present a fictional world, given the fact that hundreds like the Mastroianni character (Gabriele) were arrested for homosexual activities or even suspicion of it (see Paul Rowley’s 2018 documentary, The Red Tree for a recounting of the Fascist government’s imprisonment, mostly on islands far smaller than Sardinia, of gay and political prisoners) and simply recognizing that there may have been an equal number of overworked and uneducated housewives such as Antonietta, forced by their Fascist-party husbands to stay and home and bear new babies, particularly since a seventh child resulted in a government-sponsored financial perk—we might almost describe this fictional incident as representative of a series of unpleasant truths.
The interchanges between the gay anti-fascist Gabriele and the dissatisfied Antonietta are at first rather predictable, with the former politely inviting in the would-be intruder and even helping her retrieve her bird who had flown up near his window from the busy housewife’s residence below. What saves this rather mundane gathering of small-talk and sexual misconceptions (when Antonietta returns to her unit, she observes that Gabriele has moved to his phone, presuming he is calling his girlfriend) is cinematographer Pasqualino De Santis’s astounding shifts of the camera’s focus from 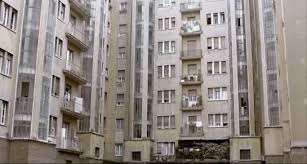 the cramped internal rooms of Antonietta’s flat as she gathers her husband (John Vernon) and six children for chaotic awakening, dressing, and breakfast before she begins to attend to bed-making, clothes-washing and dishwashing to the open-lensed portrayal of the vast gathering of these familial units as, all called into this super-Fascist celebration, individuals and family groupings come stumbling, marching, and finally running out of their equally Fascist-like residential tower.

The moment the film has moved into deep focus, particularly given the fact that we are now suddenly left alone with just three individuals, Gabriele, Antonietta, and the nosey gossipy caretaker who, through her radio broadcast, provides us with updates from the world outside, the camera tells us far more about the lives of the couple than their own developing conversations.
Gabriele, the anti-Fascist who is about to lose all of his freedoms, is busy in his personal warren in sorting books for others to later claim and in making his last contacts with his friend/lover? Although we can easily trace his movements as Antonietta does and, apparently, so has the Italian government, they make little sense without context. A phone call is perceived a being made to a woman, the sorting of books might simply hint at a change of residence instead of imprisonment, and his gentle kindness—he invites his guest to coffee and attempts to offer her a book, The Three Musketeers, Dumas’ tale which speaks of the central characters’ battle against the injustices, abuses, and absurdities they discover in the world around them—yet his actions and inner life remain hidden, unreadable by the traditionally-bound Antonietta donna madre, a mother figure who lives up to her feminine responsibilities.
Yet, if her life seems all too obvious and stereotypical—because her husband is a Fascist, she keeps a scrapbook outlining Mussolini’s political achievements and his proclamations—with most of her life made easily accessible to Gabriele, who, as she attends to her kitchen duties, seeks out in what appears almost to be a secret evaluation of his new acquaintance,
she too, so she reveals has some deeper held secrets: her husband is unfaithful and is currently corresponding with a teacher, a woman far more educated that she; and even more importantly he is arrogant and dismissive of his wife. 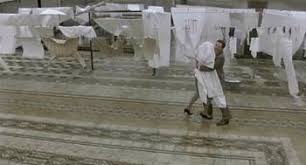 As things progress between them (at least in her eyes). with Gabriele attempting to provide her with a little fun by dancing a rumba and, when later helping her to take down the sheets hanging on the rooftop clothes lines, wraps her momentarily in a bedsheet, she mistakes his playful actions as flirtatiousness, responding in like kind.
Gabriele grows furious with her misapprehensions, and berates her for the sudden transformation into the male stereotype of all Italian women: outwardly prim but inwardly always ready for sex. And she, perhaps for one of the first times in her life, suddenly realizes just how much she has played along with that and other male-determined roles and duties throughout her life.
Despite Gabriel’s admission that he is gay and the building caretaker’s aspersions that he is also a virulent anti-fascist, Antonietta seeks him out sexually, to which, if for no other reason than recognizing they are both subject to behavioral rules forced upon them, he responds. 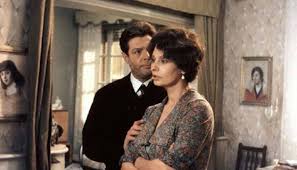 Antonietta is startled by how gentle his lovemaking has been, an experience she has never before encountered. For his part Gabriele—whose horn in religious myth announced the resurrection of the dead—reminds her that the experience with her has not resurrected him, that he remains gay and, although able to have sex with women, will not convert to heterosexuality: “Nothing’s changed.”
But for her everything has changed. As she scurries back to her apartment to serve up a simple meal to her returned family, she takes up the book he has given her, beginning to read until she is distracted through her gaze at his window by the arrival of the Fascist police to take Gabriel away.
The moment Gabriele turns out the light to his apartment, Antonietta turns back to her kitchen, as the camera returns to its early interiority, the good wife eventually trotting off to her husband’s bed where they will perhaps attempt to produce their seventh offspring, whom he wants to name Adolfo after the Führer. 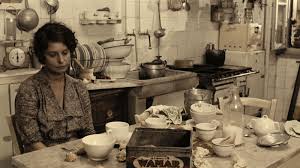 The viewer of this film can only perceive that both of these central characters are now imprisoned for their sexual behaviors. If the narrator of The Red Tree is credible, at least the locked-away homosexuals found in one another a sense of community, Antonietta has no such possibility. The only way she might have of escaping her prison would be to abandon her entire family and, despite even what she might learn in books, the values with which she has been indoctrinated. The only remaining traces of a new possibility for her exists in her memory of the “special” afternoon with Gabriele, a kind of love she might never experience again, and which her beloved myna bird, a traditional symbol of “undying love,” may now and then remind her.

Perhaps only Antonietta daughters Romana and Maria Luisa (the latter played, ironically, by Alessandra Mussolini, Mussolini’s grand-daughter and Loren’s god-child) might possibility grow up to escape their mother’s entrapment.