Actually, neither of the two “girls” in this forgettable short directed by Fred Guiol for the Hal Roach Studios—and staring, before they had become a team, Stan Laurel and Oliver Hardy—ended up liking sailors. We have to presume that this work’s title, Why Girls Like Sailors, was ironic. 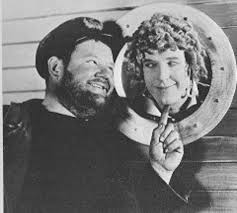 Hardy, sporting a scruffy beard and described by an intertitle as "a bully, the nastiest crew member, after the captain of course," is almost a lookalike to that captain (Malcolm Waite), who is just a little taller and stouter, but also features a scruffy beard. Although this basically forgettable comic short of 1927 is generally only sited in lists of LBGTQ movies for the reason that Laurel plays a crossdressing woman (the second of the “girls” I mentioned), the mean men, who endlessly argue like a ship-marooned husband and wife, are a kind of same-sex couple. The “nastier than his nasty underling” captain of “The Merry Maiden” (a name. moreover, that reminds us of the silly sailors in W.S. Gilbert and Arthur Sullivan’s HMS Pinafore) even allows his first mate to occasionally use his razor and chastises him early in the film for using it too often, in short suggesting that his First Mate has become what one might describe as “too familiar.”
If nothing much else is made of their relationship, the very fact that they look so much alike characterizes them as a highly temperamental “pair,” if nothing else, from whom the other sailors on board try keep their distance.
Of course, that doesn’t mean that they are not both seeking out someone of the opposite sex. Even in the pre-code days of filmmaking, sailors, although known to bunk down with one another aboard ship, were generally stereotyped as womanizers once they had reached land. At one point the Captain, planting a kiss upon Willie’s face even says “I haven’t kissed a woman since we left Africa,” probably an inside racist joke in 1927.
But this film immediately has other gay fodder on its mind.  Inexplicably aboard a nearby boat in Sugar Bay, where the “Maiden” is now docked, are a seemingly heterosexual couple, Willie Brisling (Laurel) and his fiancée Nellie (Viola Richard). 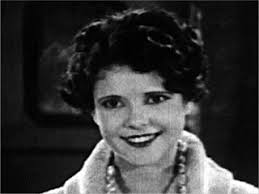 Surely this may present us with an image a loving couple—Willie has even just bought his Nellie a lovely necklace—but his gentle kiss of her cheek sends him immediately into a kind stupor that leaves him spinning through their cabin, knocking over a chair and falling into a bed where, with his eyes blinking into empty space and his tongue tied as tight as a noose, that is so goofy that even a commentator on the “Laurel and Hardy Central” site describes him as being in “Pixie mode,” flitting around and making funny faces, my dictionary describing the word “pixie” as meaning a fairy or, as a second definition, a “petite vivacious woman or girl.”
The intertitle suggests that “In little Nellie’s eyes, Willie Brisling was the most handsome man in the world. Others saw him in a slightly different light.”
Prowling their boat is also the Captain of the “Maiden,” who once he spots Nellie, is determined to kidnap her and take her back to his own quarters. Entering the loving couple’s room, he instantly begins to court Willie’s girl, who pulling away, introduces the stranger to her lover, who she declares has his own boat; “Show him Willie.”
Willie pulls down his shirt to reveal a tattoo of his ship, “the Periwinkle.” A periwinkle, in case you’ve forgotten, is a blue flower, often described as the flower of death, supposedly because its glossy vines were often woven into headbands placed upon criminals on their way to execution and children who had recently died. We can only suspect that the filmmaker or his writers, at least, are telling us that any trip with Willie—even to the altar—can end only in a kind of frozen netherworld.
The Captain quickly douses Willie’s dreams of any voyage by pouring an entire jug of water down his blouse, the liquid ballooning about his belly as if he suddenly had become pregnant.
In fact, soon after the Captain does abscond with Nellie, Willie’s previously empty head—I should add that just before this he has attempted to scare away another would-be girlfriend poacher by portraying a “headless man”—conceives of a solution to his situation: he will dress as a woman, seducing the four sailors and then the captain himself. 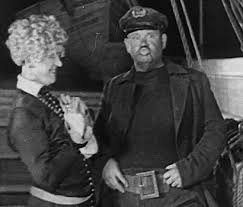 How he achieves this consists of a rather boring repetition of luring each sailor, one by one, around a corner where in conks them with a cudgel which sends them, in turn, spinning around the next corner to where the First Mate is standing watch. When they, in turn, collide with their superior he angrily tosses them into the ocean. When their own motions no longer take them around that corner, the “new girl” literally dances them toward the First Mate, sometimes posing them into positions of tentative attack. One by one the sailors are disposed of. And now Willie, reborn as a wild, flirting sex fiend, can turn her/his attentions to the Captain by sitting on his lap, recklessly tweaking his check, and even placing her arm around his shoulder.

Enter the Captain’s wife, longing for more than a month of martial bickering, and just in time to observe his new sexual shenanigans. She’s ready to shoot him as well as the other woman, but Willie as the easy woman, tells her it’s all just been a test to make her jealous. 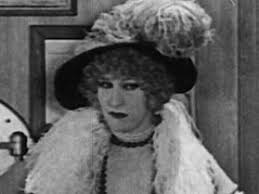 Escaping, at least momentarily, the wife’s wrath, Willie hops off to save his Nellie, the two of them, now like girlfriends walking off into the future—but not before the wife, spotting them through the porthole, shoots the clothes off their back, leaving the two to walk away in their under garments both with an utter hatred of sailors and their landlubber wives.
Rereading what I just wrote I realize I’ve made this double reeler sound much funnier than this movie truly is. The short was thought to have been lost until in 1971 the Cinémathèque Française announced they had a copy, but critic Roland Lacourbe, after reviewing it, found it simply “mediocre.”
A private Danish collector later was also found to own a 16mm print, and helped it to be re-released in Copenhagen. After Laurel and Hardy author Glenn Mitchell saw that version he observed "Why Girls Love Sailors is one of several instances where the status of a 'lost' film has been reduced by its rediscovery."

Posted by greenintegerblog at 10:45 AM