James Sibley Watson and Melville Webber (directors, with a story based on Biblical passages) Lot in Sodom / 1933

With poet and art historian Melville Webber, James Sibley Watson produced two major experimental films in the early part of the 20th century, The Fall of the House of Usher (1928, reviewed previously in my World Cinema Review) and Lot in Sodom (1933), as well as a lesser known satiric work, Tomatoes Another Day (1930), all of which represented a developing American avant-garde cinema unlike anything else known.
After directing the Poe adaptation, the duo begin work on what was to have been called “The Dinner Party,” but abandoned it, as Watson later wrote, “as being too difficult.”
Watson goes on to describe the new work they would now undertake, Lot in Sodom:

…two new members had been added to our group, Remsen Wood and Alec Wilder. Remsen wanted to use our equipment in making a sound film of objects moving in time to the music of Stravinsky’s Fire Bird. In return he agreed to help us with Lot, and help us he did. It was through him and his friends at Kodak Park that we obtained a sound on film recorder. He kept our new optical printer working, made valuable suggestions, and most important of all, he helped Melville with the difficult task of synchronizing our film with its sound track—the musical score composed and conducted by Louis Siegel and played by students from the Eastman School, among them the oboist Mitchell Miller. Though crudely recorded, the music gives to portions of the film an impact and a meaning that would be badly missed if the projector’s sound system were to break down.

Before continuing with my discussion of Watson’s 1933 film, however, it will be interesting to note that, as the grandson of Don Alonzo Warson and Hiram Sibley, he inherited their Western Union Telegraph fortune and the social standing among the Rochester that went with it. His mother had established that city’s Memorial Art Gallery.
And prior to turning to movies—Watson was educated as a medical doctor—the young socialite supported many writers and artists including Marianne Moore, Kenneth Burke, and Gaston Lachaise.
Throughout the 1920s, moreover, Watson became deeply involved with The Dial magazine, and was named its president. With Scofield Thayer he virtually co-edited the journal, arguing not only for the inclusion of those artists he had supported but William Carlos Williams, whom Thayer disliked, also contributing some of his own work under the name W. C. Blum, as well as translations such as Rimbaud’s A Season in Hell.
This most certainly explains not only his interest in literary subjects for his filmmaking efforts, but helps to make clear why he and Webber chose such experimental and avant-garde methods for their cinematic attempts.
Lot not only combines the music and elaborate lighting Watson mentions above, but applies some of the newest of cinematic techniques including multiple exposure, trick printing, and tilts and spins of its subjects and sets, but the expressionistic and symbolic structures he applied, some of them obviously influenced by Robert Wiene’s The Cabinet of Dr. Caligari (1920) and the early works of G. W. Pabst.
While watching this film for the first time the other evening, I observed to myself that it reminded me, at moments, almost of a Biblically-based cantata infused with lines directly lifted from the Bible and Latin phrases. 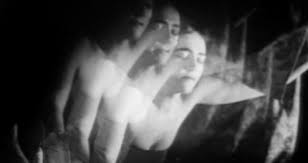 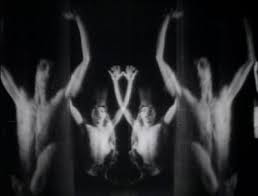 I am now also a bit confused by the cinema commentators who describe this film as somewhat “homoerotic.” In fact, what the directors display in these early scenes is a clear instance of homosexual lust, only a little shy of what might later be described as home-made porn and certainly far more explicit than the early gay physique magazines that satisfied those who cracked them open throughout the 1950s.
As their anatomies tilt and tumble through Watson and Webber’s cinematic space, the Sodomites come alive in their somewhat balletic maneuvers, tamping their actions down only when they lift and drop a totally naked torso out of the frame, suggesting perhaps that this one time they have gone a bit too far in their sexual games. 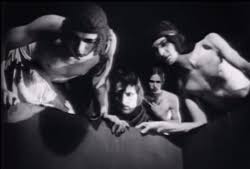 In his nearby home, protected by giant doors marked with esoteric metal carvings, sits Lot with his daughter and wife (played by Watson’s wife Hildegarde) nearby, the seemingly only unhappy people in town.
Lot (Friederick Haak), dressed in a costume which the actor himself applied daily of heavy grease paint and a beard of twisted rope, prays to God to help rid his city of the evil that it suffers, although the Biblical texts suggest his prayer was to spare Sodom and Gomorrah from destruction since the cities still contained a few righteous souls.
The Lord answers with his offering of an angel (Lewis Whitbeck, Jr.), a man so lovely that the locals demand Lot free him from his room so that they might “know” him (there were two angels in the original text). Although there is still a great deal of controversy about what that “knowledge” means, in popular myth it has continued to suggest they wanted sexual intercourse with the heavenly visitor. 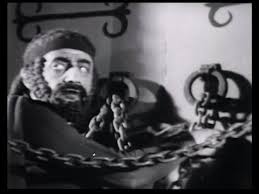 Lot, in an attempt to waylay their attacks against the angel’s saintly body, at God’s command offers up his daughter (Dorothea Haus) instead, presumably so—in an early version of sexual conversion—they might discover heterosexuality. Although there is much writhing and apparent suffering on her part, the introduction into the film of a serpent larger than even the city’s temple, suggesting perhaps that she too is a kind of latter-day Eve, argues that Lot’s attempts were quite unsuccessful.

When the angel, having finished dining and drinking within Lot’s house, does enter the streets, his holy aura, represented in a disk-like spin of rays, so dazzles the waiting gay men that they quickly fall dumbstruck to the ground. 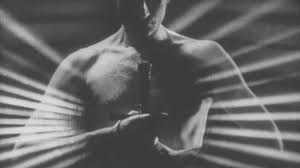 It is time, as God tells Lot and his family, to leave the city so that it might be destroyed. As the story goes, Lot’s wife cannot resist looking back at the flames of the wicked city and turns into what almost looks, in the directors’ crude recreation, like a pillar of salt.
In some Jewish commentaries her transformation into salt emanated from the fact that when the angels visited she found herself without salt for dinner, and thus asked her neighbors to borrow some, thereby letting the entire city know about her special guest.
In the Muslin version she is simply spoken of as a bad woman who would not leave Sodom behind. In yet another variation, she turns back to check to see if her daughters, married to Sodom men, were leaving the city or staying behind. However one reads her actions, it is clear that Sodom was a place that neither Lot nor his family members truly wanted to leave.
Watson’s and Webber’s cinematic version, if we are at all sympathetic to a wider view of sexual activity than the Biblical God was able to condone, presents us some notion of why.

Posted by greenintegerblog at 10:18 AM