The great Japanese director Nagisa Ōshima’s last film, Gohatto is a complex and ambigious film that might, upon first viewing, be difficult for Hollywood-bred audiences. I suggest for US audiences originally coming to this film, that they see the work’s beautiful hero, Kanō Sōzaburō (Ryuhei Matsuda) to be a bit like Herman Melville’s character Billy Budd—without all the Christian trappings.
Clearly, Sōzaburō (I use Kanō’s first name throughout to give him equal weight to the HMS Bellipotent crew’s beloved Billy) is no stand-in for Christ. He has willingly joined the Japanese Shinsengumi, the elite samurai order of the mid-nineteenth century, specifically, as he puts it, “to have the right to kill.” Unlike Billy, this stunningly beautiful young man has not been stolen, against his will, from another merchant ship, but has willingly joined up for the promised sword-play. And kill he does, perhaps as many as three times in a film wherein the other warriors see no violence whatsoever.
Finally, if Sōzaburō is tied to any ineffable beings, it is to the world of the ugetsu, the world of the rain and the moon or, more explicitly, to the world of ghosts, not to the human incarnation of the son of God.
Yet, much like Billy this 18-year-old samurai, once permitted “on board” at the samurai academy, certainly sets the male hearts aflutter. Chuck Stephens, writing in Film Comment described the new recruit as “some sort of teenage daydream: a pale and lethal alien from the glitter side of the moon.” And much like Melville’s young hero, we know almost from the beginning that all will not end well.
Melville, writing for a late 19th century American audience could not openly express whether Billy actually gave into his various sailor-mates’ desires and lusts, but for the all-male samurai homosexuality was the highest level of love, and Ōshima leaves no question about the prurient interests of Sōzaburō’s barrack mates and his superiors. From the very first moment that he watches the beautiful boy in a mock fight against Captain Okita Sōji (Shinji Takeda),Vice-Commander Hijikata Toshizō (renowned actor Takeshi Kitano), the Captain Vere of this story, suddenly opens up his usually inexpressive face to a slight grin as he begins to talk of those who are “inclined,” evidently including himself; and even if he does not actively seek out sex with the bishonen (the “beautiful boy”), he watches over him as carefully as a mother hen would care for her new-born chick, assigning him as his own Aide, while placing another promising recruit, Hyōzō Tashiro (Tadanobu Asano) to Okita’s First Unit. 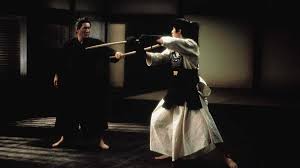 Even he, however, recognizes the dangers of allowing such a figure into a deep pool of unfulfilled, testerone-fueled desire—and later, the Commander (Yoichi Sai), having heard that the beautiful new recruit has taken on a lover, reminds his second-in-charge, "This has happened before. Passion influences the heart and this in turn means trouble. It must not happen again.—yet Hijikata’s grin says everything. He is delighted for what today we might describe as the “eye-candy” standing before him despite his tentative fears of what might happen to his men—and, of course, to the boy.

Stephens quotes writer Ian Buruma, referring, in turn, to yet another commentator Nosaka Akiyuki: “a true bishonen has to have something sinister about him. The vision of pure youth, because of its fragility perhaps, reminds one of impermanence, thus of death. In fact, youth is beautiful precisely because it is so short-lived. The cult of cherry blossoms, which only last about a week in Japan, is the same as the worship of the bishonen, and the two are often compared. Taken one small step further [the cult of the bishonen] is the cult of death.”
And Stephens himself, in his terribly insightful if inconclusive essay, notes the trajectory of this film: “Delicious in design, delirious with detail, Gohatto was photographed in and around ancient temples in Kyoto. Its mysterious appeal is poly-demographic: anime admirers, romance aficionados, fans of Mishima and Hana-bi, young lovers on a date—this is the Ōshima film for you.”
We get a scene out of Mishima almost immediately in this work. In part to test him his willingness to accept death, Hijikata immediately assigns him the beheading of a fellow samurai who has been caught borrowing money. If the samurai are permissive regarding male on male sexual activity, their codes are highly strict regarding everything else, and anyone who is caught violating the code must disembowel himself. The beheading evidently reveals that the swordsman is only “suspected” of having violated that code.
Just as Sōzaburō has shown his skill as a swordsman a day earlier, he severs the head with simple aplomb after uttering the traditional phrase before the kill, “Forgive me.”
Already Tashiro has attempted to claim Sōzaburō as his lover, while the beauty has pretended to sleep; and soon after he visits the bishonen’s sleeping mat yet again, prepared to spend the night. Yet as he turns the boy over for a kiss, Sōzaburō puts a small knife to Tashiro’s neck (later, we discover the knife has been stolen from the would-be assailant himself), making it clear that he desires no lovemaking with the lusting swordsman. Soon after, however, when Hijikata pairs up the two for a fight, the perceived better swordsman Sōzaburō succumbs to Tashiro, which seemingly proves to the Vice-Commander that the two have now sexually entwined, the rumor of which quickly spreads around the barracks. The narrator, who intrudes from time to time throughout the film, makes a point that much in this all-male world is based on just such rumors.
It is not that Sōzaburō is disinclined for male sex. When Commander Kondö is called to Hiroshima, Hijikata is put in charge of the official residence, and moves his best men, including Sōzaburō, to the Commander’s far more ornate palace. Nearby, wined and dined by an older samurai, Tojiro Yuzawa (Tomorowo Taguchi), Sōzaburō seemingly sexually succumbs to the man’s passion twice, begging him only not to tell Tashiro about the events. 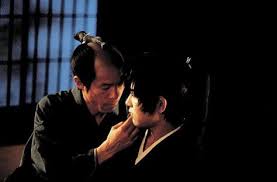 When, soon after, Yuzawa is found dead, the officers and those in the barracks all suspect Tashiro; later when asked by a sergeant whether Yuzawa attempted to have sex with him, Sōzaburō replies truthfully, but lies when he reports that he resisted.

To help mitigate further advances, Hijikata insists that his trusted Inspector, Sergeant Yamazaki (Masa Tomiizu) take the beautiful boy to a geisha house, since Sōzaburō is still a virgin when it comes to women. Yamazaki carefully arranges everything, including choosing the establishment’s youngest and most beautiful woman. Three times after the sergeant asks the boy to accompany him to the inn, the bishnnen refuses, finally, on the fourth try, accepts. The sergeant, in another effort to enforce normalcy, he suggests that the boy is now old enough to cut his chonmage, the long ponytail that accentuates his youth. But  Sōzaburō refuses, declaring that he has made a “vow.” To whom and why we cannot imagine. Surely not to the sexually rejected Tashiro; or has he been rejected, we must ask. 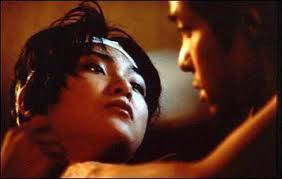 Along the way, Sōzaburō breaks the strap of his shoe and embraces Yamazaki’s hand intensely as the sergeant attempts to help. Finally, he ensconces the boy in the proper room, and returns home. When he returns the next day to check on the encounter, the geishas report that it was a disaster, that Sōzaburō refused to lay with the girl. One proffers her belief that the boy only wanted to go to bed with Yamazaki himself, and had been waiting for him.

Later Yamazaki is himself attacked back in quarters, but is able to scare the would-be killer away. The knife he finds nearby seemingly belongs to Tashiro.
To solve the lustmord that is quickly escalating the Commander orders the beautiful boy to kill his presumed lover, Tashiro. He also orders Hijikata and Okita, to whose divisions Sōzaburō and Tashiro had been assigned, to hide a short distance from the encounter to observe the execution without intruding. Or is it an “execution” and simply not another attempt for their superiors to prove which of the two was truly the superior swordsman.
In the moonlit quite ethereal landscape—created by an artificial backdrop— all has become ambiguous, and Okita’s questions further confuse us as he challenges Hijikata himself about his relationship with the bishonen. Yamazaki is offended. But Okita continues, describing a long ugetsu tale he has read about a soldier taking an enemy soldier he has maimed in combat into his home in order to nurse him to health. Gradually, the two become friends and find themselves growing even closer before one of them is forced to kill himself for having fallen in love.
Troubled by all this discussion of male love, Hijikata temporarily turns the table, so to speak, wondering why Okita has been so observant of his and others’ reactions to the boy and querying his interest in such ugetsu stories.
Okita declares not only is he “not inclined” but, in a kind of early homophobia we now might equate to being closeted, tells Hijikata that he hates both of the young recruits. He reads the ghost stories only for their beauty of their structures, not for their content.
Sōzaburō and Tashiro approach one another, the younger boy claiming that Tashiro has killed two men over his love for him. Tashiro quickly rejects the charge, claiming that he knows that  Sōzaburō has long ago stolen his knife. As the two swordsmen begin to fight, it becomes apparent that indeed Tashiro is the superior of the two, at one point towering over his would-be lover who cries out “Forgive me.” 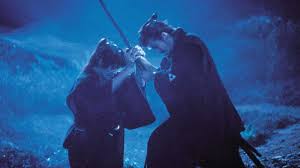 That, we recall, is the cry of the executioner about to behead a prisoner. But Tashiro has arrived too late for that early execution (which it was illegal for him to attend) to recall it, or more likely, he hears it as an impassioned cry of the man he still loves. In any event, he lets up just enough for Sōzaburō to regain his position and thrust his sword in the other’s body.

Both observers lament Tashiro’s death, recognizing that Sōzaburō has been forced to kill the other simply based on the words and views of those around him. In the brief flashes of light on the dark landscape, however, we can only note that Okita too wears his hair in a mage. Was Sōzaburō’s vow made directly or silently to him?
If nothing else we now do suddenly recognize our John Claggart, the not unattractive man who, nonetheless, as Melville writes, seemed “defective or abnormal in the constitution,” possessing a “natural depravity.” As the story asserts, Claggart more than anything was controlled by “envy” for Billy’s “significant personal beauty,” along with his innocence and general popularity.
As Sōzaburō, a winner who has lost the man who most loved him, moves off down a road, Okita tells Hihikata that he has something he has forgotten to do, and moves in the direction of that the killer has taken. Alone, Hijikata suddenly comes to the perception, shouting in the direction in which Okita has now moved: “ Destroy him. If you did not love Sōzaburō, Sōzaburō loved you.”
In the far distance we hear a scream as Okita kills the boy.
A bit like Lear, Hijikata suddenly screams out in a rage: "Sozaburo was too beautiful. Men took advantage of him. He was possessed by evil." And with that, the Vice-Commander takes up his own sword, cutting down several branches of the nearby cherry tree, ending the tragedy into which we have just awakened.

Posted by greenintegerblog at 9:51 AM