In 1961, when Pier Paolo Pasolini’s first film Accatone premiered, critics from both left and right were shocked, some going as far as to deem the film a “scandal.” Today, watching this remarkable movie, it seems difficult to comprehend their reactions. But if you think back to many cinematic conventions of the time, it becomes apparent that most read the film as a kind of new neo-realist presentation, arguing, presumably, through its bleak almost cynical scenario, presented an Italy made up of a world of pimps, thieves, and never-do-wells, who beat upon women and basically were self-destructive. 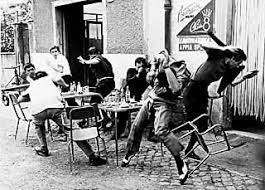 In fact, the seemingly “realist” aspects of this film does precisely show that. The friends of  Vittorio Cataldi, the “Accatone” or “scrounger” of the title (the beautiful Franco Citti) and he are non-working pimps, thieves, and simple lay-abouts who spend most of their days (and presumably nights) at local bars in the slums outside of Rome, boasting, squabbling, and fighting one another—when they’re not busy beating up hookers and their own wives. Accatone (the name Vittorio almost proudly has given himself) is a married man, whose wife has left him; he serves currently as a pimp to Maddalena (Silvana Corsini), who early on is hit and hurt by a motorcycle, hardly able, but forced, nonetheless, to hit the streets to bring in more money. She is mercilessly beaten by three men for her involvement in the arrest of a notorious pimp, now in prison.
At moments Accatone and his friends seem almost like less comic versions of the figure of the American TV series of the same period, Maynard G. Krebs in The Loves of Dobie Gillis, who, whenever he encountered someone involved in labor, pitiably screeched out the word “work!” Yet, from the very beginning of the film we are forced to perceive these same figures as something far more noble, violent, and even sacramental than their slightly comic personas. In the very first scene, as they argue about the death of one of their group who was bet he couldn’t eat three plates of potatoes and wine and then swim across the river. He lost the bet, one of the group proclaims, because everyone knows you can’t eat and then go in swimming. Accattone attempts to disprove that old wives’ tale, repeating the same actions—and miraculously achieving the feat, bringing him fame among the ragazzi and hangers-on throughout the region.

Moreover, there is clearly something else going on in their daily gatherings. Although they talk endlessly about women, they are a society of men whom Pasolini’s camera endlessly portrays in frontal framing, as if scanning, over and over, their rough-hewn beauty. If Accatone is surely the most attractive, the others all present a kind of earthy handsomeness, chosen by the director from figures he actually encountered on the streets.
The little male society, moreover, despite their heterosexual bragging, is most definitely misogynistic, and when they do fight Pasolini presents it much like the American artist Robert Longo did soon after, as a slow-motion wrestle with one another that more closely resembles the coils of lovemaking. There is not only a completely homoerotic sensibility to their gathering, but a suggestion that they cannot exist without one another, that they have embraced one another for life.
It is for that very reason why, when Accatone even attempts to pull away, they dismiss and taunt him, as he does to himself in robbing a gold chain from his own small child in his attempt to  turn the innocent, yet willing, Stella into a whore. 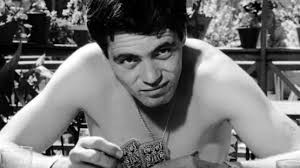 As critic Peter Bondanella has noted, Accatone can be seen as a kind of inverted Christ, with his local friends serving as his disciples. One might even suggest that when he turns from his Magdalene (Maddalena) to Stella (Franca Pasut), symbolic of his destiny (his star), he raises the ire of his disciples. Indeed Maddalena, in this underground version of an anti-Christ’s life, becomes his Judas, denouncing him to the police, who follow his activities even closer, contributing to his death.

For one day, joining his brother, Accatone attempts to redeem himself through actual labor. But he, quite literally (and, of course, spiritually) is too weak. Forced to rejoin in the petty thievery of his friends, he dies in a police chase—just as his dream had vaguely predicted.
In the end, accordingly, we read Pasolini’s film as a kind of morality play instead of as a piece of realist fiction. Today Accatone—although just as forceful in its commendation of bourgeois and governmental leaders with regard to their treatment of the Italian peasants—appears far closer to a film such as Teorema, a kind of theorem about the needs of a Christ-like love and sexuality, than it seems to be a projection of everyday life—which, in turn, lifts Pasolini’s work from a presentation of the everyday to a cinema of great significance.

Posted by greenintegerblog at 3:55 PM