Film director Ron Howard has for years made some of the most traditionally-crafted of Hollywood pictures. Interestingly, however, in a few of his works such as Frost/Nixon and now in his documentary of this year, Rebuilding Paradise, he allows nature and those who inhabit it to provide the language of his movie—and by language, I do not merely mean the characters’ everyday chatter, of which we experience a great many passages throughout this film, but the complex interplay of natural and man-made sounds which make up the first passages of his newest film.
What Samuel Johnson wrote of Milton and his Paradise Lost, if we simply change the subject of his sentence, “the author Milton” to the fiery inferno itself with which this film begins, might apply here as well. “[Nature] seems to have been well acquainted with [it’s] own genius….: the power of displaying the vast, illuminating the splendid, enforcing the awful, darkening the gloomy, and aggravating the dreadful.”
Los Angeles Times critic Justin Chang captures it almost perfectly in the very first paragraph of his July 31 review of the film:

The sound of the wind is rarely as sinister as it is at
the beginning of Rebuilding Paradise, Ron Howard’s
harrowing and heartrending new documentary. The
loud 40-mph gusts we hear are a grim omen, and they
soon merge with other noises—anxious radio chatter,
screaming sirens, the crackle of flames, the pop-pop
of exploding tires—to form a chorus of fast-mounting
dread. Through it all we hear a succession of human
voices, trying to remain steady but finally abandoning
any pretense of calm: “Please, we need your help,
Lord,” a woman prays. “I’m scared,” another sobs.
“I’m scared.”

Indeed these and the many others the film features should be frightened, as within just a few minutes on November 8, 2018 a fire on a far ridge rushes across the canyon, snapping down towering power lines—which the local server, PG&E (Pacific Gas and Electric) have reportedly turned off, but have left flowing with electricity—closing off pre-planned routes of escape, and allowing those who try to escape after being ineffectively alerted, to fend for themselves as they and their families must speed through completely darkened skies except for the endlessly crackling flames surrounding them.

One father films his family’s escape, as he cries out that the windows are now so hot that he cannot even touch them and his wife, the driver, laments the probability that the engine itself may explode. From the back seat the children cry out in horror, while the car ghostly passes friends’ houses, shops, and schools which are already nothing but ashes. Expecting what some, we later discover, actually experienced, that they may soon have to turn off their motor and run to escape the billowing flames and smoke, they finally spot a patch of light ahead, a few seconds later breaking through the hell they have just endured to recognize that they have amazingly returned to light.

85 others, some too old to run, many who left just seconds too late, died in the fire, several in their cars and others within their houses and other outbuildings to which they had retreated imagining they might protect themselves. Deer, horses, and other animals, some of which we observe in the flight I described above, were immolated. Over 14,000 homes disappeared under the heat of the flames, while a few small neighborhoods were completely spared. Yet the entire town with a population 26,218 people were dislocated as the ashes continued to flare up for days, live wires piled up along the city’s winding roads, and, as they later discovered, chemicals, both man-made and created by nature, polluted their wells and other water sources—pollution that might take as many as 25 years to completely clean up.
Most of the townspeople had loved their mountainside “paradise” with the kind of passion one doesn’t often observe in such communities. Some vowed to return despite the wavers in their voices and the fears their words expressed; contrary neighbors declared there was no possibility of return. Stowed up in small hotels, trailers, and other people’s homes in nearby towns such as Chico, Oroville and elsewhere.
At the first town meeting weeks later, those who wanted to rebuild gathered, angry at the turn of events, the lack of proper escape routes, PG&G, and their increasingly tense relationships with FEMA (The Federal Emergency Management Agency) who demanded a retreat from the properties onto which citizens had moved temporary trailers and other housing units, before they could begin the citywide clean-up.
No wonder Erin Brockovich, who had famously fought and won against PG&E in the Hinkley case of 1993, showed up, warning them of just how aggressively the huge power and electric company would fight their case and insisting that they pick a seasoned lawyer.
PG&E eventually settled for 25 billion, but with some of that money going to local utilities and a substantial amount to insurers covering other fires previous to the Camp Fire that devastated Paradise, individuals had a difficult time in perceiving how much they might each receive in order to rebuild. This was further muddied by the fact that PG&E filed for bankruptcy. 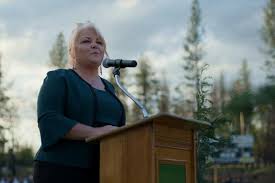 Fortunately, this idyllic community was not short on local heroes, particularly police officer Matt Gates whose endless work to man, sometimes almost singled-handedly, what was left of his small force, resulting a divorce from a wife who felt herself and children abandoned; the town mayor, Steve “Woody” Culleton, who describes himself as the town drunk until he sobered up and was elected to office, and who was one of the first of the townspeople to file for the rights to rebuild his home; and school superintendent Michelle John, who worked endlessly to keep the Paradise students together while educating them in makeshift shopping center spaces and other schools throughout the region. She, along with the help of her husband, who died soon after from a heart attack caused, evidently, by the long hours they both worked, was determined to have her high school students, almost every one of whom she knew by name, to return to the one basically undamaged school building and to hold the graduation ceremony, as they had in the past, in the high school stadium.
In order to accomplish this, she and her school board had to convince FEMA to allow them to remove most of the surrounding birch trees, still perceived as a fire threat and with many of them perceived as being in danger of falling.
Together, along with numerous other community boosters, they rebuilt a sense of spirit and urgency to “rebuild” their former Paradise. When the high school opened, she and her board expected a 2019-20 school season with about 600 students returning; 900 showed up.
Paradise, however, lost about 90% of its population, with the current number of citizens amounting to about 4,600. And despite the many figures throughout Howard’s film who express the joys of living in a world into which most of them were born, it is clearly not everyone’s idea of a paradisiacal community. It’s numerous annual city celebrations and parades may seem slightly intrusive and purposely retro to some, like me, who view the film. After all, my earliest years were spent in a town of 400, with the city to which we later moved having a population of 15,000 when I grew up.
The citizens, before the fire, were mostly white, although there do appear to several Hispanic families at 7.0% of the population. In the 2010 census, Paradise reported 92% of its population as white, 0.4% as black, 1.1% as Native America, 1.3% as Asian, and 1.6% as Pacific Islander.
44% of the town’s population in the 2010 census represented married couples, with 21.6% having children under the age of 18 living in their homes. 11% had a female homeowner with no husband present, while 4.3% were owned by males with no wife. Only 0.8% represented themselves as same-sex married couples.
In short, this town consisted of basically white, married families, many of whom had other family members, parents, uncles, aunts, and grown-up children living nearby.
Finally, even those who, by film’s end, have returned know the odds they face—with rising temperatures, canyons full of firs and other older trees, as well, most particularly, stuffed with small replants which served as fodder to sweep the fire to Paradise at such an alarming rate—that despite their enthusiasm for staying put, there may be tragic fires in their or their children’s future.
One young male homeowner, as his eyes swept over the hills below, reminisced (my words summarizing his statements): These were all cherry trees which blossomed each year for a brief period of time. I didn’t have to go to Japan to see them, I watched them from my patio and my bedroom window. When I rebuild I will replant all the ones I lost.
Despite this lovely film’s title, we cannot know for certain whether or not the Paradise these citizens recall can truly be “regained.” But for them, we can only share their sorrow for their lost past and through our empathy wish them the best in rebuilding the world they so loved.

Posted by greenintegerblog at 8:15 AM