Stephen Frears | Prick Up Your Ears

i chose him to kill me
by Douglas Messerli

Alan Bennett (screenplay, based on the biography by John Lahr), Stephen Frears (director) Prick Up Your Ears / 1987

The first scenes of Stephen Frears’ 1987 film, Prick Up Your Ears begins much in the same way that Dan Futterman’s 2005 film Capote does, with friends, trying to comprehend why they have not seen the victims for a while, breaking to their house to discover the gruesome truth. In Prick Up Your Ears it is the slightly nosy, but utterly friendly and nonjudgmental Islington neighbor Mrs. Sugden (Janet Dale) come to check on Joe Orton (Gary Oldman) and Kenneth Halliwell (Alfred Molina) who knocks on their door before calling the janitor and finally the police, who break in to discover the murdered couple: Orton hammered into death by Halliwell before the later downed an overdose of Nembutal, which, even in normal conditions, can produce symptoms of dizziness, nausea, excitability and nightmares—all of which, in one way or another might describe the lives of the two dead men, who had lived together for over 16 years, a long part of which was a kind of attempt for both of them to abandon the other. 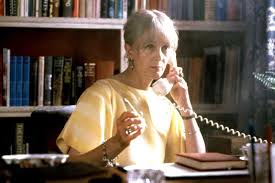 Things, however, are far too complex for that more rational decision, as we grandly are presented a précis of their lives together through the widening gyre of flashbacks we are soon after presented, first with the help of Orton’s agent Peggy Ramsay (Vanessa Redgrave)—who assigns herself the role of Orton’s “widow” as opposed to his neglected first wife, Halliwell—and soon after American theater critic and biographer John Lahr (Wallace Shawn) who follows the crumbs of the trail Ramsay provides him (somewhat abusing his wife Anthea in a manner not entirely different from Orton’s treatment of his lover) before Frears’ director and Alan Bennett’s screenplay veer off into their own presentation of some of “the facts” that almost seem to make the gory ending of the central characters’ lives inevitable. 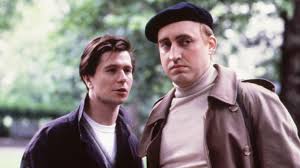 Of course, nothing is truly inevitable. The Leicester street kid who determined to better himself by taking elocution lessons and studying at the Royal Academy of Dramatic Arts—given his near-complete lack of knowledge of theater literature—was an unlikely acceptance, as was Halliwell, who, although he knew his Shakespeare well, performed his monologue in a declaratory voice much like the ham actor he would later show himself to be.
The rather prissy elder might not at all have been attracted to the rough-hewn Orton, and given the young man’s cynical approach to almost all things that reeked of high culture Halliwell might never have introduced his cute young pupil to the greats of world literature as well as its gay delights such writers as Ronald Firbank, whom their collaborative fictions often imitated.
Surely, given his more conservative nature, Halliwell might never have allowed himself to, at Orton’s urging, check out library books by established British authors, in over 70 cases, rewriting the blurbs and collaging different art upon their covers, acts which landed both of them in jail, charged for theft and malicious damage for which the judge handed down a sentence to serve of six months, an usually long period of incarceration for such acts, which they attributed to the fact that they were “queers.” 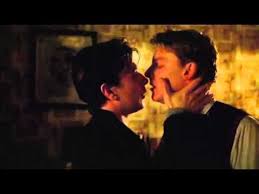 And once they each decided to pursue their selected careers solo—Halliwell collage art and Orton playwriting for both radio and stage—Orton might have more fully acknowledged Halliwell’s tutelage. Certainly, he need not have spent most of his nights out “cottaging”—in US lingo, fucking and sucking off young men in the public urinals—particularly at a time in Britain is illegal.
Or Orton might simply have long ago taken the advice of many of his friends, and simply cut off his relationship with the increasingly unbalanced Halliwell, who—faced with his own failure as a artist of any kind, began to refer to himself simply as Orton’s “personal assistant” and even his overlooked housewife.
If nothing else, Orton might have taken as his invited guest Halliwell instead of his agent to the award ceremony in 1966, where his play Loot won the best play of the year. Halliwell himself evidently begged his friend to take him to the “ball”:

Orton’s acceptance speech, insisting:
“My plays are about getting away with it, and the ones who get away with it are the guilty ones. It's the innocents who get it in the neck. But that all seems pretty true to life to me. Not a fantasy at all. I've got away with it ‘so far’
[hoisting trophy]
and I'm going to go on”…

states that would not have at all pleased his fussy friend. And certainly Halliwell would not have joined him in a cottage where, depositing the trophy Orton had stuffed into a paperback beside the urinals, before the award-winning playwright removing the bulbs from the overhead toilet lights, joined in a group sex act.
As Ramsay herself comments things might have different, permitting him a greater longevity, if Joe just out of kindness, had taken Halliwell out for dinner on the night of August 9, 1967. 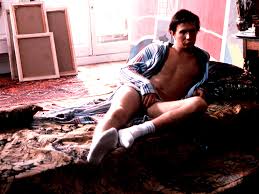 By that time, however, as the Washington Post critic Desson Howe argues, “Halliwell finds himself a forgotten (and balding) lover. Eliza Doolittle has overtaken Henry Higgins and is picking up other men to boot.”
Finally, having come to terms with the fact that, despite the fact he given all the benefits of money, a good education, and a mother—unlike Orton’s toothless ogre from whom he escaped—who encouraged him to create, he simply did not have the gift, while his street smart friend had all the talent in the world.
With an almost calm demeanor, Kenneth Halliwell, already seeking psychological help, calmly takes up a hammer to bludgeon in his lover’s head before eventually serving up a cocktail of drugs to himself, while declaring, as if it were a completely rational statement: I must have loved him since “I chose him to kill me.”
In retrospect, it almost appears that Orton chose Halliwell to kill him as well, or, at least, to stop him from “getting away” with everything he previously had. Fortunately, in his three major plays (Entertaining Mr. Sloane, Loot, and What the Butler Saw) Joe Orton did get away with transforming British drama, while influencing the dark humor of theatrical comedies around the world.

Posted by greenintegerblog at 11:45 AM