In his third feature film Russian director Andrey Zvyagintsev created a work that is far more traditional than are his two most recent works. Indeed, Elena (2011), so Roger Ebert argued, if shot in black-and-white and had been casted with Barbara Stanwyck as the titular figure, might well have been a 1940s classic.
There’s something to say for that, but I think the film has much stronger ties with the more recent work by Korean director Bong Joon-ho, Parasite wherein an entire family, trapped in poverty, gradually overtakes a wealthy home and its rather undeserving family. Only in this case it is the wife herself, Elena (Nadezhda Markina), who assures that her son from a previous marriage and his wife and two children (soon to become three) inherit the estate of her niggardly husband who has refused them almost any financial help. 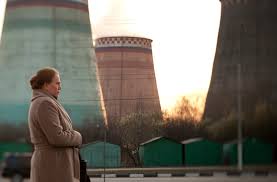 Not that they necessarily deserve it. As we quickly discover upon her journey across Moscow via bus and train to their meager apartment building in what might be described as a crumbling khrushchevka (a kind of low-rise prefabricated building built by the hundreds in the late 1950s during the rule of the then Soviet leader Nikita Khrushchev) where she finds her son Sergey (Aleksey Rozin) too busy starring into space with beer in hand to even answer the door.
His son, Sasha (Igor Ogurtsoy), in turn, is so involved with his computer games that it is only after several hollers from his clearly overworked mother, her infant daughter dangling in her arms, that he deigns to let in his grandmother, loaded down with packages of food she has brought to help keep them from going hungry. The wife, Tatyana (Evgeniya Konushkina) offers her step-mother a cup of tea but little else. After all, the entire family has become dependent upon her largess.
Sergey, we later discover, is too lazy to even look for a job to support his growing family. And we witness Sasha quite late in the film, joining with other friends in a brutal attack on what is apparently another local juvenile group— Zvyagintsev makes no attempt to describe them being gangs, but clearly turf is at the heart of their warfare—during which he also gets rather severely beaten up. 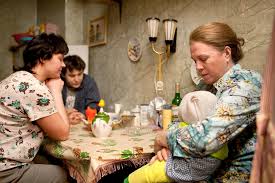 At the moment, however, while Elena joyfully holds and plays with her granddaughter, Sergey and Tatyana are focused on how to get Sasha, with his low grades, into a university—which appears to require a great deal of money, presumably to bribe school officials—so that he will not automatically be drafted into military service.

Elena reminds them that her husband is not at all sympathetic with helping her family financially, but they she will try to convince him.
When we see the house in which Elena, with her second husband Vladimir (Andrey Smirmov), now lives we immediately recognize through its beautifully crafted wooden floors and sliding doors, with its totally moderne kitchen, and the placement in his bedroom of large flat-screen television, that he is a man of some wealth, enough money indeed to pay for Sasha’s education and still leave his own daughter, Katya (Elena Lyadova) a substantial fortune. 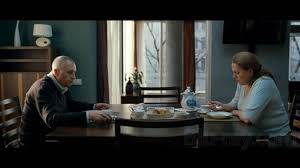 We soon perceive, however, that not only does Vladimir hoard money—of which even his home safe contains a rather large sum—but he is a man of the old school, dedicated to the proposition that “second” wives and those of lower rank should be treated in what is often described as a left-handed marriage or a Morganatic relationship in which little is passed down to his wife (she later is told she will receive residual monthly payments, but that the rest will go to Katya.
If we might somewhat sympathize with his obviously old-fashioned views, we quickly observe that Elena is less a woman who actually shares his life than a kind of servant required to bring him each morning the perfect breakfast, shop for groceries, prepare dinner, and clean up after him each night, quietly gathering up the litter of newspapers and magazines he has strewn around his bed before turning off his TV as she moves off into a separate bedroom containing a much more modest bed.
Elena seems never quite to question this, although one can see the strains of such a relationship upon her face and in the very way she walks. After asking her for sex, in part to distract her from her attempts to speak of Segey’s family needs, she lets out a short laugh, which says everything without words. Certainly, she is well aware of half-hearted attempt to quiet her pleas, just as we perceive that the sex they share will likely be loveless (the title of another Zvyagintsev movie.)
Moreover, we soon discover that Katya, to whom Vladimir intends to leave most of his estate, is one of the most cynical and uncaring beings imaginable, worse in some ways even than Joan Crawford’s heartless daughter Veda in Mildred Pierce, to call up yet another 1940s classic.
When Vladimir suffers a heart attack while swimming at his gym, Elena, asked to call his daughter, suggests a meeting beforehand just to warn her of his condition. Katya meets with her much hated step-mother, who tries to ask her to simply be pleasant to her father, all to no avail. The girl, who has never called Vladimir except when his monthly checks are late, explains that she simply doesn’t care about either her father or Elena, revealing that she has cut her drug and alcohol use to the weekends, and admitting that if Vladimir were to die she would “give a flying fuck.”
Knowing his daughter to be irredeemable says more about the father than his errant daughter. For Vladimir it is a patriarchal problem, his daughter not as someone who deserves his wealth but simply because she is being born from his semen and, therefore, something to be protected like his money and home. She is his from his “tribe,” and, accordingly, he will remain loyal to her alone—not really that much different, as I see it, from Sasha’s unspoken pact with his friends.
None of this gets said in this quiet film, but as he explains to Elena while recuperating at their home, Vladimir intends to meet with his lawyer to draft a will stating his plans to leave everything to the one who hates him most.
If we have wondered up until this point how the meek and quite submissive Elena has remained with him for the few years of their marriage, it is explained in one word. She is was the “nurse” who cared for him during his previous stay in the hospital as he was suffering from Peritonitis, an infection in the abdomen. When she reminds him of this, it is hard for one not to be reminded of an image of the Hindu deity Ganesha with his big belly containing all his wealth.
Clearly, Elena has been unable to arouse any sense of empathy with the conditions of her needy family, and a bit like a waring avenger, takes down the dictionary of medicines from their shelf and plots his murder through a seemingly harmless drug which, nonetheless, is the worst thing a man suffering from a heart attack might ingest: Viagra. 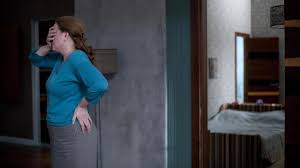 That is not say that the poor woman does not suffer from guilt, waiting outside his bedroom door, she agonizingly slides horizontally down the door which itself slides vertically so very effortlessly, playing out the dramatic difference between entrance and egress.
When the doctor arrives, finding the patient dead, he quite naturally blames Vladimir for his own misled attempts to remain potent—symbolically speaking not that far from the truth.
Elena has burned all his drafted notes to his lawyer, and Vladimir is buried, after many crocodile tears, leaving his estate intestate, meaning that both Elena and his daughter will receive equal shares.
Pulling all of his cash from the safe, Elena makes another trip to the industrial wastelands where her son lives—a voyage which composer Philip Glass’s wonderful score punctuates with a sense of fearful dread of what the future might bring—to deliver up more than enough money for Sasha to find a way into a university.
In the last scene, she has been joined by her “tribe,” with Tatyana in awe of the beauty of her new abode and Sergey imagining the construction of a new wall so that his son might, for the first time in his life, have a room of his own. He even finds a beer in the refrigerator.
Elena’s granddaughter is laid out to sleep upon Vladimir’s large bed, awakening on a vast plateau of futurity, while Sasha, looking out from the balcony scans the wooded landscape about him sneaking a view of several boys below peacefully playing soccer together.
Even if we have our doubts about whatever happiness they will discover in their new paradise, Elena’s family now, at least, have their her as their willing servant; and we ponder if possibly Sasha might find a new way of living in a world so very different from the old one in inhabited.
For Elena, now simply happy to be able to give pleasure to her family members, the crime has paid off.

Posted by greenintegerblog at 12:32 PM