When I first saw that the Alla Nazimova-produced Salomé, directed by her then husband, Charles Bryant, was included on several lists of LGBTQ films of the 1920, I laughed. I knew the opera well, and wondered how any film, even if based on the Oscar Wilde one-act play, in which Herod, the Tetrarch of Judea’s (Mitchell Lewis in this case) lust for his daughter and Salomé’s (played by Nazimova) even more passionate necrophiliac romance with Jokaanan, the prophet based on John the Baptist, could possibly offer anything for the lesbian-gay-bisexual-transsexual community except perhaps for its harsh focus on a misogynistic world in which a young, willful and oversexed teenager is murdered by her almost equally licentious father.
Yes, I knew that Nazimova herself was alleged (although pretty well documented) to be bisexual, with a strong preference for women—among her supposed lesbian friends were Eva Le Gallienne, director Dorothy Arzner, anarchist Emma Goldman, Greta Garbo’s girlfriend Mercedes de Acosta, and the set and costume designer of the film, Natacha Rambova, described at the time as her lover. Bryant, who divorced soon after the release of Salomé, was alleged to be her “lavender” husband. But did that matter, particularly since she was dancing for the masturbatory pleasure of her horrible step-father Herod hoping the attain the head of Jokaanan so that, to correct his refusal, she might kiss her ruby lips and even run her hands through his beautiful raven-colored hair. Certainly, if my operatic experiences might be indicative, he wasn’t someone with whom a gay man may take delight, particularly when laid out on a silver platter.
Rumor had it that several of Herod’s court were males in female drag and that Nazimova herself had ordered that the soldiers, guards, and pages consist of gay or bisexual men in honor of Wilde.
One has to ask, however, who would ever know, particularly given that this 1923 film was shot at a time when most male actors married for propriety’s sake and there was no Scotty Bowers (who I write about elsewhere for having bedded most of male gay Hollywood—apparently a enough individuals to fill up a Cecil DeMille epic—and connected up dozens of lesbian actors with bed-time partners) to spill it all it a book such as his Full Service. Nazimova and her cast were all before his time. And, moreover, I hadn’t yet seen the movie!
Now that I have witnessed this fantastical two-set extravaganza I will certainly admit that I’ve changed my mind. 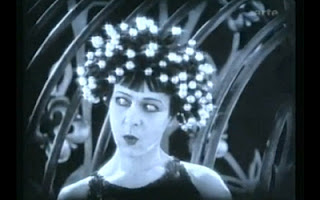 Let us start with the outlandish set designed by Rambova, based on the drawings by Aubrey Beardsley that accompanied the printed edition of Wilde’s play. This was clearly intended as the art-film of its day, and the sets and costumes—many especially created for Rambova in Paris—cost more than $350,000, an outrageous price at the time. Most of these creations are a bit like surreal versions of what the blogger for “Garbo Laughs” describes as art-deco meets Dr. Seuss. Aren’t the entries to most empty wells, in which Jokaanan is imprisoned, filigreed with metal flowers in the shape of a birdcage? Doesn’t every young teenage girl wear Christmas-tree lights in her hair to dazzle her suitors (a strange display described by some fashion connoisseurs as a “dandelion headdress”) while attired in a black almost see-through blouse and a black upper-thigh-length skirt that is so scant that when she prepares to dance she must put on a veil or two instead of taking them off?
The long frazzle-haired Herodias (Rose Dione)—reminding one a little of Bette Midler in the picture Ruthless People before her makeover in the basement of her would-be kidnappers—wears a pair of floral patterned pedal pushers that looks like something from a early 1960s work-out tape. 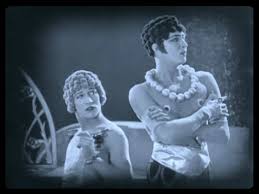 And doesn’t every Captain of Guard like the handsome bare-chested Narraboth (Earl Schenck, who throughout his career performed in more that 60 movies)—paint his nipples and place around his neck a large necklace made up of transparent pop-it-like beads? Certainly, in Rambova’s world all men (except the Hebrew visitors) wear a kind of metallic jock-strap that some critics politely describe a loin cloths, but certainly reveal far more of the male anatomy that any cloth-like covering of the penis might.
Yet so-far I’ve just described something that any LGBTQ person might recognize as perfect camp. We still have the basically heterosexual threesome—with Herod in one corner, Salomé in the center, and the well-hidden prophet below—to slosh through along with the archaic intertitles.
It does appear that at the dinner table Herodias is making love to a transsexual (woman dressed as a male) next to her. But does that make this a gay-friendly film? 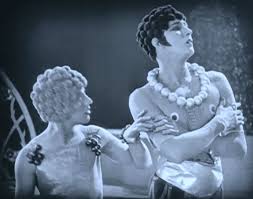 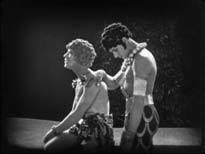 It certainly does if the love-sick Narraboth, pining away for his chance to kiss Herod’s daughter, and his “friend” the page of Herodias (Arthur Jasmine)—a relationship stressed later in the work by Salomé—have their way. Throughout the long scene in which Salomé attempts to cajole Narraboth to give her the keys to Jokaanan’s cell, the male couple recoil mostly by holding onto one another while entwining their hands, at one point, the page even briefly stroking the Captain’s beautifully painted tits. If Narraboth is ready to kill himself over Salomé’s dismissal of him, he is also willing to stroke the flesh of his “friend” every chance he gets.
And then there’s Jokaanan, himself, not at all another burly prophet out of my opera encounters, but a gaunt beauty (British-born actor and former opera singer Nigel De Brulier) who is actually draped in what I would describe as a loose loin-cloth that seems ready to fall off at any moment from his thin hips. How I wish I’d witnessed him in the opera-house before his blasphemous intertitle ravings describing the woman so mad about him that she’s willing to die, as the whore of Babylon. When he insists that she go to the desert to seek out the Son of God, Salomé is so hot-to-trot that she asks “Is he as good looking as you?” He doesn’t answer. 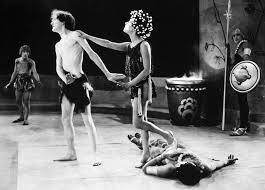 Clearly the beautiful prophet wants nothing to do with women folk, but still awes his own executioner, Naaman (Frederick Peters) so much that instead of raising up his sword, he first bows to him, getting down on his knees as if we were about to provide Jokaanan with a blow-job.
The well-muscled guards in blond-dipped hairdos seem at any moment to lunge out against the young daughter of Herod for even daring to demand they open their male treasure chest. And even when it comes time for Salomé to kiss the lips of her would-be lover’s severed head, Nazimova thankfully keeps it under wraps. The normative heterosexual lovers real or imagined in this work all end up badly.
Perhaps not every male in this piece is gay or bisexual, nor is every woman outside of Salomé ready to kiss the lesbian transsexual next to her, but I’d guess that most of this pulsating cast set against the completely artificed world they inhabit, might give it a go.
Unfortunately, after this box-office bomb, Nazimova never made another film.
But it’s little wonder that this film in the past few decades has made the rounds along with James Sibley Watson’s and Melville Webber’s Lot in Sodom at a number of LGBTQ festivals.


Posted by greenintegerblog at 3:43 PM