the smell of fire and brimstone
by Douglas Messerli

Edwin Justus Mayer (screenplay, based on a story by Cleo Lucas), Dorothy Arzner (director) Merrily We Go to Hell / 1932

Dorothy Arzner was one of the great women film directors from the early teens of the 20th century up until the Hays Code tightened its noose around the neck US filmmakers in general.
Herself a lesbian, Arzner’s films often dealt intensely with the concerns of women, including marriage, divorce, adultery, the patriarchal system, parenting, financial inequality, fashion, and numerous other social issues that male directors found to be uninteresting. Several of her films, such as Get Your Man and The Wild Party (both of these starring Clara Bow) involve complicated love interests. In the former, from 1927, the young lead, determined to marry a wealthy man, Robert, is courted by the father of the woman Robert is about to marry, joking, “If I marry the Marquis won’t that make me your mother-in-law?” In the latter film from 1929—one Arzner’s most successful movies—Bow, a college student, falls in love with her anthropology teacher (Fredric March), having long-ago shared his bed without him even recalling it. At one point Bow and several of her female friends, having been turned away from their school party for wearing revealing clothing, escape to a bar where the male patrons prepare to rape them, Bow escaping only when the professor comes to the rescue, with both student and professor eventually leaving the school on account of bad behavior.
Her 1932 sound feature Merrily We Go to Hell, recently featured on the Criterion network, unfortunately is not one of her best given its final collapse into soap opera conventions.
Yet there are plenty of wonderful moments before we get there. Featured as a comic film, by the end of the work we very clearly recognize it as a kind of tragic love story, similar to the one in which March—who in this film plays the drunken hero Jerry Corbett—would soon after be featured, A Star Is Born (in the 1937 version of the repeatedly remade classic). 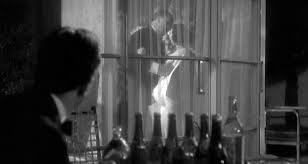 In the very first scene, for example, Jerry sits drunken on a rooftop terrace patio, while within the glass-encased apartment a few feet away drunken carousers, male and female, dance, stumble, and clumsily attempt to make-out while Jerry, in his hazy stupor, evaluates their worth, spinning pieces of broken straws in their direction. When one of the guests, the pretty young coffee-heiress, Joan Prentice (Sylvia Sydney), escaping the unwanted advances of the major Chicago newspaper’s gossip columnist, joins Jerry on the terrace, he finally comes alive just enough to offer her a drink, to which she saucily replies: “No thank you. Drinking isn’t one of my many vices.”—immediately suggesting we are in for a heady search to discover just want many other vices might consist of. 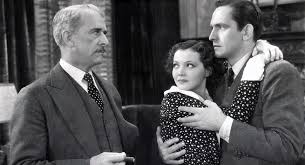 Unfortunately, they are never revealed except perhaps for the worst of all vices, sentimentality, as she quickly falls in love with the witty drunk who begins each round of public drinking with the toast that serves as the film’s title.
Despite her conservative father’s quite sensible pleas for her to realize that Jerry is not the man for a highly protected girl who has been showered with nothing but the best in life, the inexperienced romantic is convinced that she can redeem her man, seemingly oblivious to the fact that he shows up late to the very first tea party to which he is invited and is too drunken to attend their marriage-announcing event.
It isn’t that Jerry doesn’t attempt to warn her about falling in love with him, even going as far as to make two early wise cracks about his cock-eyed views of love. After meeting her father for the first time, who obviously detests the young man come-a-courting, Jerry tells Joan:

“I think your father is in love with me.
joan: Why?
jerry: Because he seemed upset. Men always most love the ones with
whom they are upset.

Later that evening he even admits: “I found out long ago that I enjoy the company of men—particularly if they’re a bartender.” Joan’s lame response reveals her naiveté: “Don’t tell me you’re a woman hater.”
For that is just Jerry’s problem. He hates and forever drinks to the memory of the one woman he loved and who brutally dumped him, the actress Claire Hampstead (Adrianne Allen), one of the film world’s sleaziest ex-lovers. 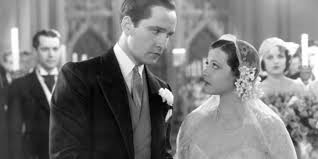 Jerry does attend their grand wedding sober, but, having forgotten to bring the ring, presents his bride-to-be with the ring at the top of a screw-cork. Joan hardly bats an eye. After all, as she tells her father, “You’re sure of everything when you’re in love.”
And for the first few months as Jerry goes “on the wagon again” and she marches him into a daily work ethic wherein the newspaper reporter must write three pages of his new play-script each day, it almost appears that the miracle Judy Holliday conjured up for another drunken playwright, Dean Martin in the movie musical Bells Are Ringing, might work. At least he finishes the play, When Women Say “No”—even if no one seems to want to produce it. Yet, on the most disastrous night as the couple and their friends celebrate dozens of script readers having turned his play down, they receive a telegram saying that a New York producer wants to open it on Broadway. The hitch, and in such works there is always a hitch, is that the star will be Claire. 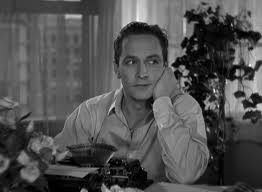 It hardly takes a wink for Jerry to return to her arms as he once more hugs the bottle close to him as he formerly had his now almost deserted wife. Just when he is about to end their relationship Joan turns on him to accuse him of neglect. He begs her to lock the door to keep him home, but she rightfully replies, “I’m not your jailor,” opening it wide so that he might leave her alone of his own accord.
Joan is about to pack up and return to Chicago before she has a revelation, declaring to Jerry that she intends to remain in New York to embrace a “modern romance” unimagined by her great aunt in which they will live in an open relationship, with the caveat that if he has such privileges, so too does she, an agreement that finds him once again declaring what he has throughout the film: “You’re swell.”
Just when you think, however, that this picture might be livening up to reveal a sort of an open marriage in the style of Noel Coward’s Design for Living, produced on stage in the very same year, the writer, Edwin Justus Mayer, bunts, tossing  away any opportunity he might have had to allow Arzner to hit one out of the stadium.
Joan sings the song just fine, but as Jerry tells her, “She’s got the wrong tune.” Her standard toast, for example, is far more bitter than Jerry’s: “Modern marriage. Single lives, double beds, and triple bromides in the morning.” And even Cary Grant, in an early minor role, doesn’t truly appeal to her, particularly when he suggests that they might “pop up to Harlem” to have a little fun.
Mayer was the writer of a great many romantic films and even worked with the beloved Ernst Lubitsch on what I consider to be his one stinker of a film, To Be or Not to Be, with Jack Benny repeating stupid gag lines over and over as if he were auditioning for his later radio and TV shows. 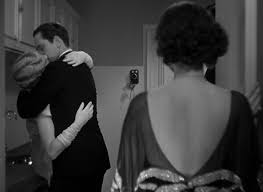 Feeling terribly ill, Joan visits the ladies’ room where a black washroom attendant suggests she visit a doctor. Yes, Joan, just as any clever sixth-grader might have imagined, is pregnant. Intending to tell Jerry and perhaps win him back, Joan finds that he is far too busy with his drunken friends and openly kissing Claire in their kitchen to be able to hear what his wife has to tell him.
The open marriage is clearly off, as Joan packs to return to Chicago, pleading that if instead of his repetitive claim of her being a swell he might have been only once replaced that phrase with the words “I love you,” their marriage might have lasted. Off she goes, with the thick-headed Jerry finally coming to the recognition that Claire is nothing more than “a phantom to whom he has been drinking for years.”
Since we have now entered soap opera theatrics, Joan, now in bad health, has a baby which quickly dies. Without knowing this, Jerry has attempted to write her about his love time and again, with each letter and flower bouquet being returned by her protective father.
When Jerry finally learns of her pregnancy—from the same gossip columnist who attempted to manhandle Joan in the very first scene of the movie—he flies to Chicago, demanding entry to her hospital room where Joan’s father stands guard. When Jerry insists upon entering, the father— pretending to be preparing her for her for the shock of her husband’s return while Joan, in fact, pleads for him to bring Jerry back—returns to the doorway stating that she refuses to see him.
Barging into the room, Jerry discovers his loving and always forgiving wife is ready to start all over again. So everything, after all, is just swell! At least we have Arzner’s beautifully cinematic images to remind us that this movie might have been an act of love.


Posted by greenintegerblog at 7:47 AM