milking the bull
by Douglas Messerli

Director Fred Niblo’s 1930 film, Way Out West, returns us to the tropes of the 1912 film Algie the Miner, only in this case, instead of the father sending his son “way out west” to become more masculine, the hero of this comic tale, Windy (William Haines), short for Windermere as in Oscar Wilde’s character, is kidnapped by local cowboys who he swindled out of their monthly salaries in a carney side-show, forcing him to work in the manner of a slave to master relationship on an Arizona ranch.
Although the arc of the film’s plot is rather predictable—the indentured city slicker suffers the slings and arrows of the angry cowboys, but eventually toughens up enough to catch the eye of the ranch boss, blonde beauty Molly Rankin (Leila Hyams) who, by film’s end, he promises to marry—the real pleasure of this film, such as it is, derives from Hanies and his cowboy captor’s one-liners, most of them stuffed with campy gay references.
Perhaps before going any further, I should mention that the good-looking Haines—who had become a successful matinee hero starring in movies such as The Midnight Express, Little Annie Rooney, Brown of Harvard, and Navy Blues—lived off the set with his lover of 4 years at this point, and his open sexuality was beginning, at least from the studios’ point of view, to threaten his career. Only three years after the film under discussion, Haines was arrested in a Los Angeles YMCA room with a sailor he had picked up on Pershing Square. 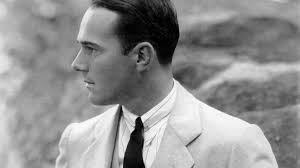 MGM mogul Louis B. Mayer insisted that in order to quell tabloid rumors Haines enter into a “lavender” marriage to keep the truth from the public. Such a sham heterosexual relationship would mean having to abandon his lover James Shields, which Haines refused to do, resulting in Mayer firing the rising star who soon took up interior design with Shields, doing over the homes of numerous stars and celebrity figures including those of Joan Crawford, Gloria Swanson, Carole Lombard, Marion Davies, George Cukor, and later Besty Bloomingdale, Ronald and Nancy Regan when he was still governor of California, Walter and Leonore Annenberg, and Jack L. Warner.

At the time of Haines’ death in 1973, he and Shields had been together for 47 years; in despair Shields soon after committed suicide.
It almost appears, accordingly, that by 1930 his writers, in this case Alfred Block, Byron Morgan, and Joseph Farnham felt that Haines’ sexuality was well enough known that they could satirize it in the Way Out West story. Like other gay and lesbian figures such as Cary Grant and Rock Hudson whom I mention later in these pages, the screenwriters intentionally planted sexual double entendres, some of them right out of vaudeville and burlesque skits, which along with the basic set-up of the subtle S&M structure of the plot seemed almost a perfect fit, with most of the campy scenes flitting by the chuckling general audience while serving as a kind gentle wit to those in the know.
I don’t intend to provide a list of all of these one-liners, but a few will help to elucidate the tone of the film, in which Haines also spends plenty of time rapidly blinking his eyes in a “come-hither” manner and, at moments, even accompanying his deliveries with limp wrists and bashful leans into the dialogue as if to say “I don’t have a clue what this means.”
The first of these has received, perhaps, the most attention. Playing opposite comedian Polly Moran, the ranch cook named, quite intentionally, “Pansy,” Haines’ character Windy pretends to flirt with her the moment she drops her name, which would be quickly recognized in 1930 as a reference to the “Pansy Craze” that had recently arisen in nightclubs in Greenwich Village and Harlem, in which effeminate gay men performed openly on stage, and which the Hays Code outlawed in 1933 with the fall of prohibition.
Asked to serve the meal Pansy has prepared for the boss of the ranch, Windy enters her cabin with tray in hand, the female boss Molly calling out “Pansy?” before, discovering Windy, explaining, “I thought you were Pansy,” to which the Haines character quips “I’m the wildest pansy you ever picked.”
Almost immediately, as he attempts to hover over her, Molly queries him “Why you acting that way?” Windy’s answer reiterates all the fairy jokes ever associated with James Barrie’s most well-known character: “It’s the Peter Pan in me.”
When he finally comes to recognize that the “boss” is in fact Molly, the sister of one of the cowboys who has enslaved him, Windy immediately makes a come-back, “The boss don’t have no pants on.”
Meanwhile the cowboys, out to make Windy’s life a hell, order him to milk the cows. When he accidentally enters the bull-pen where a horned beast comes running in his direction, forcing Windy to dive over the fence, one the cowboys exclaims “He sure tore into them bulls.” 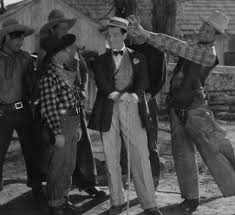 Upon Molly’s suggestion, the cowboys order he make the daily deliveries, which consists of loading up a small cart with cow manure mixed into the straw and moving it into a nearby field. Egging him on, the ranchers insist that he must dress in his very best clothes.
Windy’s untoward response is an outright admission of his sculpted male torso: “I not only have the clothes to wear, but I have the figure.” When, a few moments later, he appears in a dapper suit with hat upon his head, even a cowboy sarcastically admits “You’re beautiful.”
You get the idea. The writers must have thoroughly enjoyed their writing sessions, quaveringly attempting to keep a tight line between their openly queer-based risqué comments and the cowboy’s more mean-spirited taunts.
To tamp down what might almost be perceived as homophobic comments, most of the sexual interchanges are between Windy and the cowboy comic dunce of the group. Having just purchased a handsome pair of horse pants the straight-man shows them off to Windy, who attracted to this somewhat bizarre item of apparel, from time-to-time takes out a pocket watch from his vest before returning it. Noticing the shiny object, the not-too-bright cowpoke predictably asks if it’s for sale.
“Oh no, I couldn’t sell it,” sighs the con-man. “It was given to me by my pater, my father.” After establishing that his father is now dead and the treasure is his last memory of him, Windy again lures in his victim, who blurts out “I’d like to see your pater,” his clumsy pronunciation making the word sound as close to “peter” as possible. 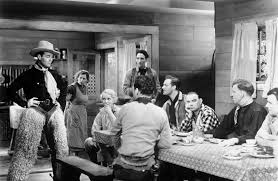 In the very next scene, Windy appears before his cowboy friends in the horse pants, to which the dunce explains, “He got my horse pants.”
There is one scene, however, that makes it clearly apparent that the cowboys recognize Windy as representing a being quite different from them. As they plan for a dance in celebration of the roundup which will take the cowboys away for the ranch for a few days, Molly’s brother Buck (Charles Middleton) takes the neophyte aside to warn him from attending the celebration: “The folks that come around here don’t herd with your kind.” 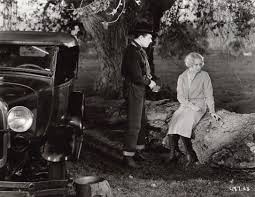 And we immediately recognize at the moment that the campy patter has come to a stop. The plot—in which Molly is snake-bitten and saved by Windy who drives her to a nearby Indian encampment where the medicine man saves her (Windy’s reply: “Thanks chief, you’re a sweetheart.”); attempts to drive her home through a blinding sand storm; is chased by the cowmen, guns blazing, through a small pueblo village; and, upon their discovery that he was not intending to abscond with their boss, but was heroically trying to save her, celebrates him by accepting Windy into their communal “herd”—slowly winds down to tick away this film’s more traditional conventions.
The astounding fact that this picture was one of Hollywood’s more successful offerings of 1930 hints that perhaps the audience of the day better understood the campy one-liners than they let on.

Posted by greenintegerblog at 1:21 PM