a queer paradise without fear or guilt
by Douglas Messerli

James Bolton (screenplay, based on the fiction by Jim Grimsley, and director) Dream Boy / 2018

James Bolton’s Dream Boy, based on a fiction by Jim Grimsley, begins in a way that might support the easier interpretations of its title, suggesting that the backwater territory of Louisiana to where Nathan Davies (Stephan Bender) and his family has moved serves as backdrop to yet another tale of a neighbor kid, Roy (Maximillian Roeg) discovering his gay dreamboat, in this case, the shy Nathan. 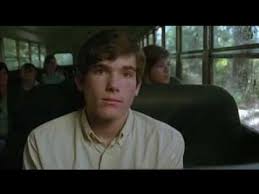 Roy, as a farmer’s son must do chores before he gets down to his homework and drives the school bus as a part-time job to arrive at his morning destination. It is on that bus that Nathan first shows up, somewhat uncannily, in Roy’s rearview mirror. Seeing the handsome visage staring back at his gaze, Roy quickly motions for this tempting vision to move up closer to him, thus beginning a friendship that, like most coming of age gay sex tales, eases into a bonding between the two forged in their attempt to help each other with homework—Nathan being a model student in English with Roy better comprehending the complexities of Algebra.

But something about this film doesn’t quite click into the gears of such now almost predictable gay teen romances, beginning as they generally do with a few stuttering attempts to demonstrate what their hormones demand followed by a longer period of angst about the direction in which their sexual drives are sent them. 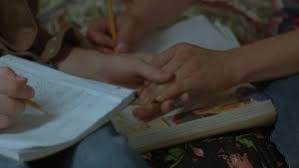 True, Roy has a Bible study girlfriend (Rooney Mara in her first film role) with whom he has almost graduated beyond the stage of intense petting while his best friends, Burke and Randy seem almost to be hostile at first to the newcomer and perhaps just a bit envious of the fact that Roy has found a apparently closer friend in Nathan. The young boys themselves, Roy two years older than Nathan, perceive their sexual attraction to one another almost immediately, playing it out with a gentle touch of the hands in only their second homework assignment meeting. Over the next few days, moreover, they sexually experiment at a speedy rate that is almost unheard of in such “coming out” films.
Before long they have almost entered a relationship where they feel such a strong emotional tie that Roy asks, almost out of a sense of possessiveness, whether or not Nathan has had such homosexual contact previously. Nathan admits that this is his first time, with which Roy, without admitting so much, seems to take solace. That such gay virgins might suddenly find themselves in the midst of such longing and desire seems a bit incredible—particularly in an isolated world where, as Roy tells Nathan, hardly anyone else visits. It might almost be a kind of lost paradise in which neither boy feels the need for any feelings of fear or guilt.
Yet, when soon after Nathan begins to fuck his friend, Roy suddenly pulls away, clearly shocked by the younger boy’s skill regarding what he might imagine is a neophyte’s attempts to please him. He goes so far as to accuse Nathan of lying about his previous experiences with a male other.
Moreover, that the fact that the woods nearby are filled with strange totemisstic locations, a common Christian cemetery, an ancient Indian burial ground, and an empty mansion from the long ago slave days which is said to be haunted, all suggest to the viewer that something is slightly amiss in this movie if we are to imagine it as a youthful portrait of two gay boys coming of age.
Gradually, the “dream boy” epithet shifts from a notion of Nathan being a model of Roy’s sexual desires, to the possibility of the entire story working within or at least beside a kind of fantasy or a presentation of an unreliable realist narrative somehow intertwined with dreams. In short, the love relationship between Nathan and Roy begins to take on the shape of a work such as Andrè Breton’s surrealist fiction Nadja, a mix of the Russian concept of “hope” and the Spanish “Nadie” or “No one.”
Things become even stranger when Nathan’s father Harland (Thomas Jay Ryan), away for weeks at a time for his job as a salesman, returns. The tension between him and Nathan’s mother Vivian (Diana Scarwid) is subtle but somehow palpable. Even more apparent is the problematic relationship of Nathan to his father, who does not at all appear to approve of Nathan’s new friend and asks several times if they might just have a long talk, which results in the seemingly obedient Nathan retreating into his bedroom, longingly staring out the window for a glimpse of Roy.

Vivien insists that her now increasingly drunken husband leave their son alone. And when we observe Nathan, as he prepares to go to sleep, tying a piece of twine between his chest of drawers and his bed post, we suddenly know that we are being told something far darker than this tale might have led us to believe, particularly when the father trips later over the trap, the fact of which sends Nathan scurrying to the nearby graveyard in order to sleep out the rest of the night.
We now can comprehend how Nathan has learned to “screw” so professionally. His father has obviously been abusing the boy for a long while.
Despite the temporary tensions between Nathan and Roy, when Roy discovers that his friend is terrified of returning home, he arranges for Nathan to sleep in their empty ranch hand’s bed. And soon, with Roy’s other friends, they “get away” for a weekend of exploring and camping in the apparently magical woods and its wonders to which Roy has promised to introduce his new lover. 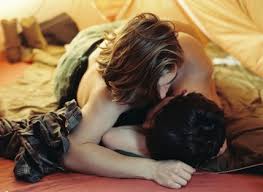 In the haunted house, however, Nathan begins to hear what appears to be his father’s voice, finding comfort only in the arms of his friend as they hide away in one of the tents which they have erected in the mansion itself. The next morning, as the other two boys explore the mansion’s upper floors, Nathan and Roy once more enjoy sex, for the first time Roy performing fellatio on Nathan. In the middle of their pleasure, however, the other two boys return to catch them in the act.
Roy and Randy run off, but Burke remains, raping Nathan, and, when realizing what he’s just done, breaks off an arm of a nearby chair and clubs him to death. When the body is found by Roy, the police are called, Roy no longer trusting his previous friend Burke. Nathan’s father arrives and covers the body. 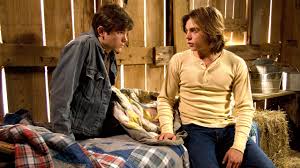 A funeral in the local Baptist Church follows, but as Roy returns to the ranch hand’s room he has a vision of Nathan, greeting the boy with a smile. Next door we see Nathan’s mother, suitcase in hand, obviously leaving her abusive husband forever.
The next morning on his school-day bus route, Roy looks once more into the rearview mirror to see Nathan’s face reflected in it, the only rational explanation being that Nathan has either now become a dream from which Roy will never escape or that he has been a dream-figure all along.*

*I have never read Grimsley’s 1995 novel, but apparently it ends with a kind of resurrection, with Nathan awakening in the Mansion to seek out Roy, the two discussing how they might escape the others who might search them out and agreeing to re-enter the woods and disappear forever from society. In short, Nathan’s death is still an open issue by the close of the fiction. Yet clearly, within any realist context, the events which seem to still partake of the realist conventions of the rest of the book make sense only if they are perceived as being a part of a dream world or a fantasy.

I might also mention that Grimsley is also a noted playwright, and I believe is a friend of one of the playwrights I published on my Sun & Moon Press, either Mac Wellman or Len Jenkin. In any event, Grimsley sent me a manuscript, if I recall correctly, of his collected plays Mr. Universe and Other Plays, which was ultimately published by Algonquin Books of Chapel Hill in 1998, after I passed on it because of my recognition that I could not continue publishing books on that imprint, having just begun to produce new titles under my Green Integer.


Posted by greenintegerblog at 4:25 PM