a body scourged by sailors
by Douglas Messerli

Most of experimental gay filmmaker Kenneth Anger’s works are an acquired taste. If you love leather, bikes, and boys who spend hours pulling on their denims, slicking back their hair, slipping into tight leather jackets, checking out the outline of their protruding cocks, and zooming up their motors, you will adore Scorpio Rising (1963). Sorry to say, as sometimes sexy as these images are they don’t quite put me into cinematic ecstasy. 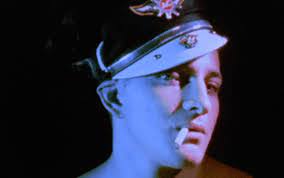 Nor, for that matter does one of Anger’s very first works, the highly homoerotic sailor flick Fireworks from 1947—although this one is far more visually fascinating and psychologically complex.

The sailors here serve as a kind of double-edged sword, beautiful boys in summer whites to whom the unnamed 17-year old Anger is simultaneously highly attracted but also repelled. Anger himself has noted that during the Zoot Suit Riots of 1943 he had witnessed sailors in uniform chasing down Mexican men and attacking them.
Accordingly, one of the standard symbols of homosexual eroticism is presented in this film as also a possibly dangerous force to which one must sacrifice oneself before being able to partake in the sexual joys they represent. 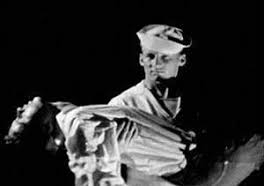 The dreamer, in fact, has already sacrificed himself or at least been crucified by the men in white before the film’s very first frame, showing the young man (played by Anger) being carried into his bedroom like the dead Christ as depicted in the many historical pietàs. Placed rather gently upon his bed, the dreamer gradually awakens to recall his soldier-boy re-encounters through photographs of the sea men and himself. In a somewhat witty moment, the boy appears suddenly to be getting an erection until he pulls the projectile of a male African sculpture from under the covers.
He dresses and tentatively crosses the room to enter a door marked “Gents” as if it were a urinal filled with sexual possibilities or, in this case, possibly even a kind of inverted version of the typical carney invitation of “Girls, Girls, Girls.” 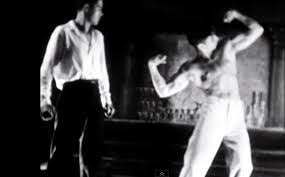 The boy enters only to find himself in a sort of bar, surely something close to a gay bar wherein a muscular sailor, much like a hoochie-coochie girl, performs his tricks, which in this case instead of dancing consists stripping off his shirt to flex his muscles and pose.
A bit like an intoxicated carnival goer, the boy’s eyes open wide as he admires the man’s arms, chest, and back. But when he proceeds to offer the sailor his cigarette—an act extraordinarily similar to Jean Genet’s prison-set offerings of his 1950 short film Un Chant d’amour—which instead of the sailor accepting the offering, results in his taking umbrage, attacking the handsome kid and using a flaming bundle of sticks with which he lights the boy’s symbolic phallus. 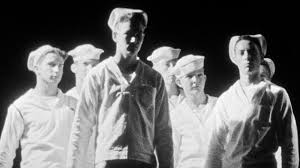 But even that somewhat calmer act is interrupted as a phalanx of sailors gradually moving forward as if in some mysterious military operation or even a dance in which the males maneuver in pairs, trios, and quartets. This too also quickly grows violent as they near the young gawker, chasing after him and pinning his body to the ground, whereupon one stuffs his fingers into his nose while the others beat him with metal chains in an obvious allusion to sado-masochistic sex, before reaching into the inner recesses of his bodily organs, to discover his heart which appears as a ticking timer. The blood pouring from his bodily orifices which has resulted from the sailors’ physical attacks is soon after washed away with milk, which clearly reminds us of the substance of motherly nourishment and, obviously, a stand-in for urine, the male fluid often employed in S&M sex. 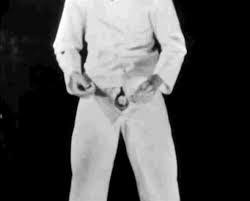 In another witty moment, one sailor unbuttons his pants crotch only to reveal a Roman candle shooting its contents into space instead of a penis filled with semen (all puns applicable).
The dreamer, now wearing a decorated Christmas tree upon his head, as if decked out in drag somewhat like Carmen Miranda, moves toward the burning fireplace where several of the sailors’ photos, obviously a reference to early versions of pornography, are burning, as if the sexual excitement of the boy has spontaneously brought the objects of his desire into the realm of his own body heat.
Back in in the sack once more, he is seen sleeping with a man whose head is radiating light, as if the film itself, just like the photographs, has caught fire within its projector. 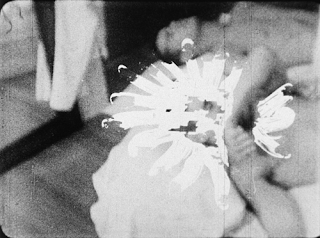 Perhaps Anger’s later musings about this flick, which he claims was shot in his own Beverly Hills home with sailors he’d hired over a long weekend while his parents were away on a visit, says everything we need to know about his freshman work: “This flick is all I have to say about being seventeen, the United States navy, American Christmas, and the Fourth of July.”
One would think that a film such as this, with no apparent nudity, no male-on-male kissing, or even simulation of homosexual sex could hardly be subject to any obscenity charges.
Yet upon showing the film at Los Angeles’ Coronet Theatre, the owner Raymond Rohauer was arrested and charged for presenting homosexual content with William C. Doran, as the prosecutor, focusing on what he repeatedly described as “the penis scene,” evidently the comic moment when the sailor’s open crotch revealed a firecracker. Rohauer was found guilty with a fine and three years’ probation in 1958.
Appealed by civil rights attorney Stanley Fleishman to the California Supreme Court, the judges found homosexuality to be a valid subject of artistic expression, reversing all previous charges. Fleishman later defended and won the case against Anger’s Scorpio Rising.

Posted by greenintegerblog at 5:17 AM