Jamaican-born British director Lloyd Reckord’s short 16-minute film Dream A40 reminds me a little of a truly intelligent version of the American TV series The Twilight Zone with a plot which Rod Serling and his colleagues never might have imagined to write.
The time we are about to enter is back in the terrible days before the British Sexual Offences Act of 1967, a final realization of the 1957 Wolfenden Report’s recommendation which had taken those 10 years to come into existence. 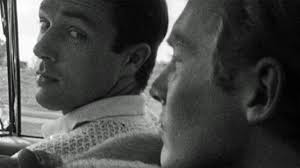 The twilight world that the two young gay men (performed by Michael Billington and Nicholas Wright) are about to encounter lies simply along route of a country road trip down a major highway, A40, that takes the riders from London, through Oxford, and eventually into Wales—that wild and wholly territory which took a couple of other British day trippers into “The Old Dark House” of haunted horrors overseen by the Femm family, including gay brothers Saul and Horace, cooked up in the imagination of filmmaker James Whale.
But this time the travelers barely get out of London when an obviously flirtatious woman in her Austin Healey cruises the handsome driver of the Ventura Ford Station Wagon (Billington) encouraging him to speed up and away from her heterosexual gaze.
His partner, in the back seat, (the much more laid-back Wright) teases him about the unwanted solicitation by playing Eve to his buddy with an apple he’s brought along for sustenance, reaching round to put it into his lover’s mouth before quickly withdrawing it as he continues chomping away on it in his friend’s ear. The driver finally pulls it away from his companion and finishes it off, his mate now casually stroking his arm since they now, symbolically at least, are both sinners about to banned from their paradise.
Almost at that very moment a car pulls up where a little girl (Beverly Green) stares them down through her the open window of her family’s Ford station wagon. The act is rather innocuous, although the driver quickly pulls his arm away from where he was stroking his friend. Wright’s character laughs it off, while Billington’s troubled and seemingly paranoid figure fusses “You find that sort of thing funny, don’t you?”
In the terrible apocalyptic year of 2020 we might all find that trivial incident to be even more of a laughable matter, After all, what is his consternation all about? As his younger riding companion puts it, even if the girl witnessed their minor expression of affection she certainly wouldn’t know what to make of it. Yet the incident has so troubled the driver that even when they pull into a roadside restaurant to get a bite to eat, he finds it impossible to even imagine stomaching a sandwich, and almost as quickly as they have entered the establishment they are back on the road, with the easily flustered driver speeding up clearly over the limit.
Perhaps to today’s younger audiences the meaning of these insignificant events would be hard interpret. But let us remember, as British Film Institute curator Simon McCallum has written, 1967 was

…crucial period in the fight for LGBT rights in
post-war Britain, where a rash of prosecutions of
high-profile gay men evoked earlier scandals, not
the least the persecution meted out to Oscar Wilde
and others by the Victorian establishment.

Careers were ruined and cover-up marriages destroyed. Imprisonment was common, and when locked away in a goal individuals suffered journalistic, peer, and family shaming. As in the case of the significant mathematician and war-time hero Alan Turing, suicide was a common way out. 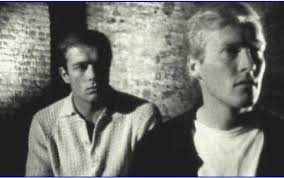 The angered Billington character stands in a kind of rebellion, answering his friend’s question as to his destination with a bark of despair: “There must be someway out of this place,” almost as if the dreamworld in which they have found themselves did not reveal its own entry, suggesting they now live in a nightmare world having little to do with the logic they had experienced in the friendly party the night before. A bit like a labyrinth of mirrors, in and out appear to point in entirely opposing directions.
As he enters another room he sees a great many men gathered around what is obviously urinals in a bathroom, suggesting the cottage sexual activities of many urban gays. But these humorless beings look to be more out of a vampire flick rather than enjoying themselves in group masturbation. He quickly runs from the scene, the director portraying the M. C. Escher-like landscape through wide-lensed views of backdrop porticos. Climbing over a short wall he finally reaches a space where in the distance he sees a human being, rushing toward him.
The man is a cashier who cautiously lifts a glass barrier to accept a bribe which might free the driver and his friend. 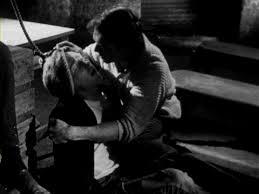 Yet as our would-be hero returns to retrieve his companion, he finds him half-trapped within the noose, blinking his eyes once before he, apparently, slips away into death. The survivor bends down to pick up and carry away his lover in a manner that can only remind anyone who has seen Whale’s 1932 picture of the Boris Karloff figure, Morgan, spiriting away his master/lover Saul Femm up the stairs of the “old dark house.”
If the handsome but fretsome adventurer had previously appeared to us as inexplicably paranoid, we now recognize it as having been more than a little justified.