Paul Schrader | The Comfort of Strangers

As audiences and commentators of LGBTQ films have long complained, there are far too many instances in the movies where queer figures are tortured, maimed, and killed—to say nothing of the real-life psychological abuses many of us have suffer. Yet it is quite another thing—which began recurring regularly, it’s strange to say, in the 1970s and 1980s during the increasing liberation of that coalition—to portray such figures as cold-blooded murderers and savage fiends.  Of course, in the US we might also add that women have long been portrayed similarly, and that, in general, movies in the always-violent 50 states have all focused intensely upon murder and mayhem which film characters either suffer or commit.
But it is one thing for male macho heterosexual cowboys—living in the West of the past or presently in urban communities—to “shoot it out” with one another for the possession of land, money, sexual dominance (usually over a woman) or simply privilege, but it is quite another thing to portray individuals who have long suffered societal ostracization by gender, religion, race, or sexual identity as dangerous psychopaths lurking at the edges of society ready at any moment to pounce upon those who already possess the perceived rewards of what is described a normative life. The fear such images call up help to set-back any of the achievements and recognition of normalcy these folk have struggled to make apparent to the general society.
I have already reviewed several of these accusatory films along the way, but I want to make it clear, even if I have not centered my commentaries on the fact, that I am appalled by their existence, even if sometimes fascinated by the tales they tell.
Like any segment of society, those who identify as LGBTQ beings are not all saints, however one wants to define that word. And some few of us are extremely dangerous beings. To ignore this fact, moreover, would be tantamount to a wholesale erasement of queer life. Yet, I am somewhat relieved that, in general, writers and directors attribute such behaviors as emanating from their character’s inabilities to accept their own sexualities. Certainly, that is true of Paul Schrader’s The Comfort of Strangers (1990).
Harold Pinter who has written many a play along with the scripts of films in which gays or bisexual men play out nefarious and almost, at times, explicable relationships, but nothing in his previous work efforts have prepared us for this adaptation of the novel by Ian McEwan, in which two seemingly innocent lovers, Colin (Rupert Everett) and Mary (Natasha Richardson), currently having some difficulties with their lack of completely committing to one another, return to Venice, where they had once shared a stronger sense of their love. 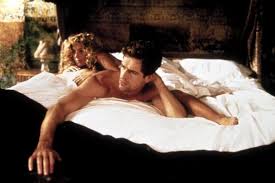 Both are good-looking and, quite obviously, well off, staying in a pleasant small hotel and wandering the labyrinthine streets connected by small walking bridges. But if Mary is quite pretty, as The New York Times Critic Vincent Canby put it, “With his chiseled made-model good looks, [Colin] is more than handsome. He is beautiful. When he and Mary go sightseeing, he is the one whom strangers pinch.”

If it first appears that Colin is the reluctant one in deciding to move in together with Mary, perhaps because she has children from a previous marriage, as the film progresses it becomes apparent that Mary has grown more cautious, in part, perhaps because of her lover’s masculine appeal to nearly everyone they meet.
Certainly, Colin seems to be of interest to a local, the well-dressed Robert (Christopher Walken), who decked-out in an immaculate white suit is observed snapping pictures of him. When the couple, after waking in their hotel one evening, decide to seek out a late-night snack, finding most the restaurants now closed, they encounter Robert—not so very accidentally we later perceive—who knows of a spot where they might dine, happily accompanying them to the bar-restaurant. 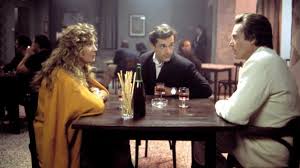 Robert appears to be well known in this place, and when told the kitchen has closed, quickly orders up several bottles of his favorite wine, which they drink while crunching on a dinner of breadsticks.
Their host, meanwhile, when asked about his past, tells a rather long and rather meaningless tale about his apparently sadistic and highly controlling Italian diplomat father, a tale which he repeats at least two other times in the movie: "My father was a very big man. And he wore a black mustache. When he grew older and it grew gray, he colored it with a pencil. The kind women use on their eyebrows. What do you call it? Mascara."
As the camera slowly pans the bar’s other patrons, the observant viewer will witness a room of mostly men, with only one woman other than Mary. I made note of this, suspecting what it might mean.
Yet, nothing happens as the two lovers, now somewhat tipsy, leave the establishment and attempt to return to their hotel. Yet, it is almost as if they have now entered a Venice they have never before encountered. Wherever they turn they end up somewhere other than the opening to the small squares they had expected, again and again encountering walls where they recalled other paths and bridges, or small walkways that might move them away from the direction they are seeking. Finally, they become so tired from the wine and exhausted from their walk, that they simply sit down and fall asleep, waking up in the early dawn.
Ultimately making their way out of circuitous maze, they find their way back to St. Mark’s Basilica and, still exhausted and hungry, stop at a small outdoor café for breakfast.
There, they once more run into Robert, who apologizing for not having guided them back to their hotel the previous evening, now insists that they  rest at his home and dine there. They discover that he, and his wife Caroline (Helen Mirren) reside in a multi-story Moorish-like mansion, and gladly fall into the beds to which she and Robert guide them.
When, hours later, they awaken, they discover their clothes are missing, Mary slipping into a bathrobe she finds in the room and Colin donning a huge towel, they attempt to discover any evidence their hosts.
Caroline appears, reporting that her husband has gone out for a while, but that she, on his orders, has hidden their clothing until they agree to stay for dinner. She also, somewhat disconcertingly describes that she has watched them asleep simply to observe their beauty.
Apparently, they have no choice but to remain. 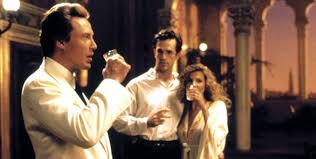 Robert soon returns, taking Colin aside to show him his father’s immense library, while Mary remains talking to Caroline, the latter of whom explains that she seldom goes out because she suffers significant back pain.
Once again Robert demonstrates that he is obsessed by his father, speaking of his preference for the past. Out of the blue, so to speak, he asks a rather off-handed question about what Colin thinks of homosexuals, and when the young man responds that he has nothing against them, the host inexplicably slugs him hard in the stomach, forcing Colin to stagger back, gasping for breath. Suddenly, we perceive that Robert is an extreme homophobe, and that his comments about his father using mascara were somehow related to his vision of heterosexual men being representative of another preferable period in history.
The lovers, Mary and Colin, spend an uncomfortable evening at the dinner table, despite the fact that Robert and Caroline are sociable and polite. But as they turn to go, Mary picks up a few photographs lying nearby on a side table, hiding her destress that in one of the pictures she has spotted Colin.
Their hosts calmly see them out, insisting that they must return soon.
That event, we soon perceive, has completely altered, inwardly, their own relationship. And from this point on, Colin, who has not yet told her of Robert’s violent aggression, becomes increasingly determined to set up house with his lover and her children, while Mary grows seemingly leerier of their making a sudden decision.
Nonetheless, the two finally take in some of the standard tourist sites, some of which they perhaps experienced on their first visit to the water-bound city. There does appear to be a closer bond between them, both of them revealing their meaningless “secrets.”
I’d suggest that Colin’s new-found eagerness to actualize their love, has something to do with both his attraction to and his fear of Robert, while Mary’s sudden diffidence may be related to the fact that Colin, having been captured on camera by Robert, could be hiding something from her.*
Soon after, the two determine to visit the beach, and while trekking back toward their hotel suddenly find themselves directly across a waterway from Robert and Caroline’s mansion, impulsively deciding to simply drop in to say goodbye.
They take a small boat to the house, and are greeted with open arms by both of the strangers, who seemed to have expected them since they had called the couple’s hotel earlier that morning to invite them, also to say goodbye, since they are moving to Canada in order to allow them a one-level residence to help Caroline move about more freely. Robert is busy packing up his father’s library, but stops what he is doing to announce that he must make a short errand before dinner, requesting that Colin join him.
What we discern from that short trip is that the bar/restaurant to which Robert first took them is owned by Robert himself, and, moreover, that, as we might have suspected, it is a gay establishment. In the alley, where they meet some of Robert’s employees, he tells them in Italian—later reporting the incident to Colin—that the beautiful man accompanying him is his lover. If Colin isn’t utterly confounded by this time, then the audience certainly is. 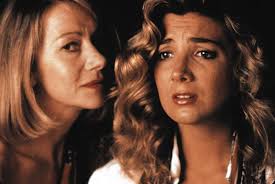 Meanwhile, back at their Maison, Caroline, while boiling up the water to serve tea, explains that her back is the product of the S&M games she and Robert have, over the years, which have increasingly escalated into more painful events.
The tea is served, while Mary asks why Colin appeared in one of their photos. As Mary begins to drink the tea, which she quickly perceives has been spiked with a drug, Caroline suggests she visit their bedroom, helping her guest, at this point, to remain steady on her feet as she pulls her into a small cell-like space whose walls are covered with blown-up pictures of Colin, all shot, apparently, by her husband and brought home to her as a gift in which she has found great delight.
By this time Mary, startled by the coarse of events, but unable to even speak, begs to be released or, at least, a doctor called. But by this point we realize that whatever trap the monsters have set up is already in place. 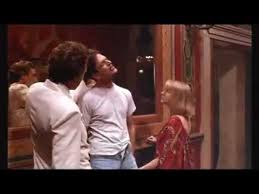 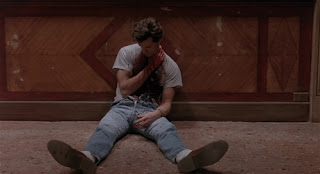 As Robert returns with Colin, Mary attempts to call out to him about her newfound terrors, while the urbane gentleman in the white suit smilingly takes out a knife and slits Colin’s neck, sliding his beautiful slowly to the floor, which only now we recognize as a sexual fait accompli.
The comfort—or even what Tennessee William’s Blanche DuBois describes as the kindness—of strangers should never something upon which one might need to depend.

* It is an interesting aside to note that just a year before he was chosen to play this role, Everett came out publicly as a gay man, having played several gay roles in film previously.

Posted by greenintegerblog at 3:54 PM