a territory not on any normal map
by Douglas Messerli

If one were merely to rely on a short précis of director Peter Weir’s 1982 film The Year of Living Dangerously one might almost think the film might be similar to Graham Greene’s The Quiet American. As in the Greene story, the hero of Weir’s story, Guy Hamilton (Mel Gibson), is an inexperienced and quite innocent man, in this case a news reporter from an Australian magazine instead of being part of the American CIA, who is posted to a dangerous location, Jakarta in the year of Indonesian President Sukarno’s fall rather than to Saigon in the early years of the Viet Nam War. And like Greene’s character Alden Pyle, Hamilton becomes involved with a rather complex woman, Jill Bryant (Sigourney Weaver), unintentionally involving her and others in dangerous incidents of which he has little awareness, either on an emotional or political level.
What Greene argued might almost be applied to this work’s hero Hamilton as well: “You can`t blame the innocent, they are always guiltless. All you can do is control them or eliminate them. Innocence is a kind of insanity. ''
In fact, innocence and its consequences might almost be said to be a major theme of Weir’s films, particularly if you think of the gaggle of precocious school girls in Picnic at Hanging Rock (1975), of the young Amish boy and the community in which he lives in Witness (1985), of Truman Burbank in The Truman Show (1998), and others of his work. But The Year, based on a fiction by C.J. Koch, has also much larger issues on its mind—the existence of which some critics argued helped to make the film too fragmented, its various focuses too diffused in the scattergun approach to its various subjects. I would argue, on the other hand, that the larger picture that this movie attempts—its concerns with what the Sukarno government might have done for its citizens and what it didn’t accomplish, the various approaches to the radical changes threatening to overtake Indonesia and the reactions to them by the outsiders, the growing love between Hamilton and Jill, and, most importantly, the importance of moral behavior in the midst of an amoral world posited by the film’s central figure, the news photographer Billy Kwan (Linda Hunt), in his Tolstoy-like question, “What must we do?” 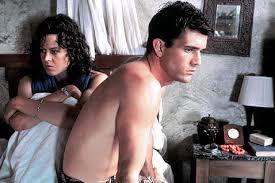 Throughout the first half of this film, Billy, a staunch supporter of Sukarno, is quite sure of at least some answers to this plaguing question. Unlike so many of the answers provided by her cohorts who argue that anything they may attempt would be entirely insignificant given the problems the country is facing, or, as Hamilton suggests, they are not there to become involved but to simply report what is happening, Billy believes that anything done is better than nothing. He has already adopted a family, mother and child, long before Hamilton arrives. And, most importantly, he keeps files on nearly every outsider of importance. The files are not in any manner political as Hamilton fears when he discovers their existence, but are perhaps even more nefarious in their purpose.

For, somewhat like James Whale’s Dr. Pretorius, Billy keeps in his files, pictures, and other curios in his laboratory (which it properly is since he develops his pictures in the same space) that might almost be said to represent his own homunculi consisting of foreign agents, news reporters, and Javanese curios that he is determined to bring to life.

It is no accident that the freshman reporter Hamilton is sent to cover a story for which he has no comprehension of or, just as crucial, has no connections with. Billy has manipulated the system to bring this innocent to him so that he might help him make over as a moral reporter who can bring the truth to Australia and other countries. Introducing the “cub” (certainly a little man in her assessment) to others who might help him with “learning the ropes,” so to speak, he also arranges interviews with major Communist figures and others who are seemingly unavailable to and/or of disinterest to most reporters.
Later, we even wonder whether Billy has had a role in assigning Kumar and his daughter, the office assistants Hamilton has inherited from his predecessor, particularly when Hamilton later discovers that they are secretly members of the PKI (the Communist Party of Indonesia, Partai Komunis Indonesia).
Billy, moreover, acclimates Hamilton to the steamy world in which shadows are as important as human beings, a world, as he describes in his writing. where “Most of us become children again when we enter the slums of Asia. Last night I watched you walk back into childhood, with all its opposite intensities. Laughter and misery, the crazy and the grim. Toy town and a city of fear.” Billy’s lessons are apparently quickly assimilated by Hamilton who in his first report writes, “I moved as in a dream they call famine.”
Most importantly, Billy introduces his Frankenstein to the woman she describes as “her Jilley,” Bryant, who appears throughout the film, along with Hamilton, to be waterlogged from her time in the swimming pool and the daily Indonesia downpours—just as Petronius’ Bride of Frankenstein was created on a stormy night and Frankenstein pulls himself out of the mill water to survive—rare allows her true beauty to surface. 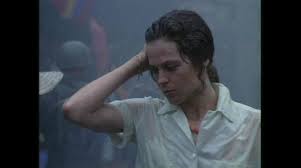 If this “Bride” doesn’t immediately scream and reject her monster, she does keep away from him as she makes her plans to escape her job as an interpreter of secret messages at the British Embassy and move on in the next two weeks to Saigon, which strangely enough seems to be the desire of many of the reporters Hamilton meets, as if they can’t wait to exchange one dangerous world for another far more horrifying one.
Most of these reporters are, in fact, ghouls of sorts, particularly the American journalist Pete Curtis (Michael Murphy) and another heavy set reporter, who, in an impassioned statement of disgust for their kind, Billy accuses of fucking little boys and girls.
Jill, however, does eventually fall very much in love with Hamilton, the two even driving away after a party by dangerously breaking the curfew. Jill becomes so completely committed to her relationship, in fact, that she is willing to betray her own country by revealing a secret message that she has decoded that the Chinese Communists are sending a shipment of arms the PKI, hoping by telling him that he will leave the country in order to save his life.
A bit like Whale’s Frankenstein, Hamilton seems also to believe he belongs to the dead, intending to stay and report about the shipment, thus endangering Jill’s own position at the Embassy as well as her and his own lives.
Furious over his betrayal, Billy certainly does sound like a version of Dr. Pretorius—"I believed in you. I thought you were a man of light. That's why I gave you those stories you think are so important. I made you see things. I made you feel something about what is right. I gave you my trust. So did Jill. I created you.”—those last three words alone intoning this tale’s connection to the Frankenstein myth and suggesting that for Weir's writers there is no distinction between Pretorius and Frankenstein the doctor who created the monster.
Weir’s version, however, ultimately is a story of redemption. Billy, after seeing the child she has loved and supported die of a fever and starvation, turns against his “monstrous god,” hurling out a large banner stating “Sukarno, feed your people,” before being thrown out the same window by the dictator’s secret service men. Like Whale’s Pretorius, Billy determines the only way he can save the world is to give up his and his creations’ lives.
Having stayed behind, while demanding his “bride” fly off, Hamilton hears the news that Sukarno has been deposed by the military and rushes off to the governmental palace, there almost to be killed as a soldier slams him in the eye with his rifle butt. In order to survive, he is told, he must allow both eyes to be bandaged—he must go blind in order to be killed, a common demand for those about to be shot to death. 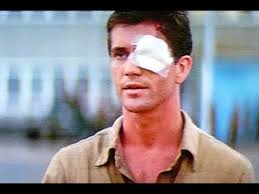 But hearing the siren song that Billy has used to calm his Frankenstein (in this case Kiri Te Kanawa singing from Richard Strauss’ Four Last Songs) he suddenly rises up asking Kumar, who is now certain that he himself will be killed, to drive to the airport, where in a deus ex machina ending, Hamilton catches the same plane where his “bride” is awaiting him. Whether they’ll find a paradise in Saigon is highly doubtful, but they have at least escaped their previous hell.
When I began this essay, having been intensely at work on My Queer Cinema volume and blog, I thought I was now surely writing on a thoroughly heterosexual movie. Even though I knew that Billy, the dwarf-like figure of Weir’s film, was brilliantly performed by a woman, I simply chalked up the director’s choice to the fact that she was perfect for the part, the best possible person to fill the role, which the American Academy apparently agreed in awarding her that year’s Best Supporting Actress Award. I still believe that to be true.
But even Hunt herself described her character as being some more than what he seems. Billy, commented Hunt, who is herself lesbian, "is supra-personal [with] layers of sexual ambiguity.”
And once I began to see the several connections of Weir’s film with Whale’s, I begun to perceive that it wasn’t just a matter of lucky casting, that Hunt was what this movie needed to suggest the sexual complexity of Billy as an almost monstrously proud figure like Pretorius determined to create a superior world to one in which he lived so filled with hatred and neglect. If the survivors to not exactly become gods, they might at least become possible angels to save us all from living so very dangerously. And suddenly I realized I was back in a queer territory not on any normal map.


Posted by greenintegerblog at 2:05 PM