The 1923 silent western The Spoilers directed by Lambert Hillyer was an enormous hit, remade in 1930 with Gary Cooper playing the hero and in 1942 with John Wayne, Randolph Scott, and Marlene Dietrich playing the leads. In the 1923 version, the cast included Milton Sills, Anna Q. Nilsson, and Noah Beery, Sr.
The original plot, based on a novel by Rex Beach, is somewhat complicated, but boils down to a simple matter of claim jumping in the Alaskan gold fields, in particular a wealthy mine called the Midas, originally claimed by Roy Glennister and his partner Dexter, but illegally taken from them through the auspices of a crooked state judge and the Nome, Alaska attorney, both of whom are paid nicely by Alex McNamara for their evil doings. Meanwhile the judge’s niece, Cherry Malotte (Nilsson) has become attracted to McNamara, but when she perceives his evil doings, switches her love to Glennister, who is such an innocent that he cannot even bring himself to allow a gunfight to be waged in her presence, particularly with Malotte being part of the judge’s family. Soon after the Duke appears in blackface, later in Dietrich’s feather boa, and after in half drag. But we’ll speak of that at another time. 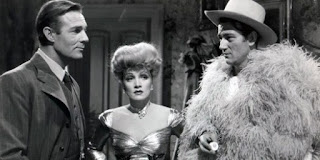 Only have he is jailed and freed on the sly by Malotte does he seek revenge, fighting it out in the local saloon and, of course, winning back his property and the hand of Malotte.
I describe this only because that same year, Stan Laurel starred in a parodic version of this film, The Soilers, a kind of Saturday Night Live-like satiric skit. Directed by Ralph Ceder for the Hal Roach Studios, this version stars Laurel as Bob Canister (in the Glennister role) and James Finlayson as Smacknamara (as the McNamara villain). Canister’s sweetheart, Helen Chesty, in this rendition making only a brief appearance, is played by Ena Gregory.
In this case the director allows his central hero to get down to business soon after the mine is stolen from him and Dexter by Smacknamara and his gang, meeting up with him again in his offices above the local saloon and demanding they fight it out by fisticuffs.
The humor of this scene depends on the fact that neither of the wranglers are the typical macho types represented by Cooper, Wayne, or Scott, but are themselves weaklings, trying to best one another with a seemingly endless series of embraces as they destroy the contents of Smacknamara’s office before spilling downstairs into the saloon. Neither one can get the better of the other as they pointlessly struggle, biting one another’s arms, slinging pots and other pieces of furniture instead of pies in the face, and finally ending it all it a ridiculous pillow fight. Their battle, in short, appears less as a western-like donnybrook and more like the postures of a dance or even a kind of absurd series of sexual couplings as time and again they reach out to get hold of one another, flailing their arms into mid-air before pulling their adversary to the ground once again, turning and tumbling each over the other like as in a slightly berserk wrestling match. As artists such as Thomas Eakins, Rainer Werner Fassbinder, and Robert Longo have long made clear, visually there is little difference between two males intensely fighting and two males rolling in sexual ecstasy across their bed. 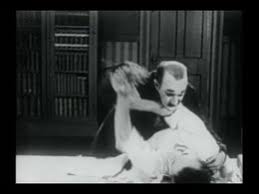 Ceder underlines this rather homoerotic tussle with the comings and goings of a film stereotype of a mad campy queen in cowboy drag, who evidently works as Smacknamara’s secretary. Swishing in and out the door to gather up documents, sometimes hidden away under the bodies of the brawlers, he appears to be oblivious to their goings-on, as if somehow such queer behavior was so natural that it was beneath notice. 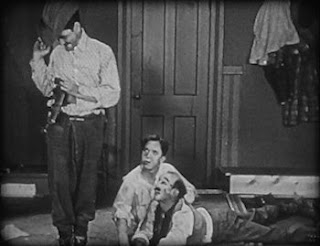 Soon after he re-enters to reach up for a shirt remaining amidst the pandemonium of papers, carefully dons it tucking it into his tight denims, straightens his cowboy hat, and primps for a few moments before the mirror, the fighters pausing until he leaves to resume their own activities, as if he has indeed caught them in an untoward act.
Downstairs, on the other hand, the patrons literally ignore their physical efforts, and when Laurel finally wins by the accidental spillage from a high shelf of several bottles upon Smacknamara’s now dizzy noggin, he enters the street with his shirt half torn off as if imitating Marlon Brando after having been beaten up behind the shipyards of On the Waterfront, announcing to cowboys about to enter the chaos-riven joint that he has “won.”
They appear to be equally unimpressed as those within and quickly walk around him as if he was a blathering madman. 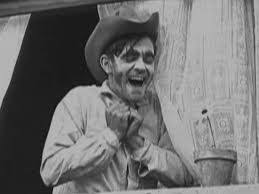 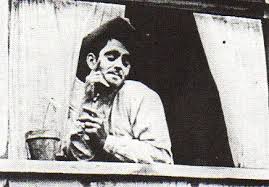 On the balcony upstairs, however, the effeminate office clerk, now dressed up as if ready for a night on the town, looks down at him while batting his eyes as if telegramming his love and admiration while putting forward his hands as if about to play patty-cake, shouting “My hero!”
Canister looks his way only to dismiss his advances, to which the campy cowboy replies by picking up a potted plant and dropping it upon the battler’s head, knocking him out just as Canister had Smacknamara. One might almost expect this celluloid fairy to suddenly swoop down and scoop up the body, but the local garbage cleaners accomplish a far more rapid removal of the remains.

Posted by greenintegerblog at 2:06 PM