Xavier Dolan’s semi-autobiographical film, I Killed My Mother—written by him at the age of 16, and which he directed and self-produced at 19 or 20 (the reports vary) with himself starring in the central role of Hubert Minnel—is a film you desperately want to like.
Since the film won awards at the Cannes Film Festival, the best Canadian film of the Vancouver Film Critics Circle, and numerous other awards, including one for his script, apparently a great many audiences and critics have done just that, not only “liked” the film, but loved it, the audience at Cannes’ Directors’ Fortnight awards giving it a standing ovation of 8 minutes. As Film Comment critic Genevieve Yue wrote: the film “demonstrates the kind of phenomenal precociousness that publicists adore.”
Moreover, there is much to commend about the cinematography, accomplished by Stéphanie Weber Biron and Nicolas Canniccioni, but  carefully overseen and, at moments, edited by Dolan—particularly the scene wherein he and his gay lover, Antonin Rimbaud (François Arnaud) drip-paint Antonin’s mother’s office with the two, at the end, falling into a sexual release after their highly physical Jackson Pollack-like artistic expressions. If the messy result of their arty attempts doesn’t live-up to their apparent mentor, the painting process clearly has represented a great deal of loving fun.
The New York Times critic Rachel Saltz writes of Dolan’s visual tactics:
As a director, Mr. Dolan has a freewheeling style,
and he’s self-dramatizing enough to want to call
attention to it without being too much of a visual
show-off. He likes extreme compositions—push-
ing characters to the side of the frame, or to the
bottom—and he makes use of slow motion (and
fast motion) and those black-and-white sequences
of Hubert confiding to a video camera as if it were
a diary (a diary whose moody visuals might seem
a bit Gap ad-ish in another context). His second
movie, the swoony charmer Heartbeats, takes
style even more seriously, both in its allusive
execution—he draws giddily from things like the
Nouvelle Vague and Wong Kar-wai—and its
subject: self-fashioning and teasing, unfulfilled
desire.

Finally, as the churlish young hero of his tale, Dolan is a cute curly mop haired young man in the manner of Timothée Chalamet (but with hair trimmed a bit shorter) who is so attractive that it’s hard to wish anything he might turn his hand to—and, in particular, something so closely linked to her own persona—might in any way be disliked. 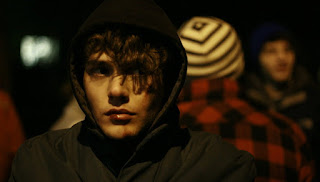 Nonetheless, for me the charm quickly wore away when I began thinking of the film I had just seen. The film is centered, first of all, on the hero’s relationship with his mother, an inexplicably hostile one that, after a while, simply doesn’t make sense. Obviously, as most young people in their last years of high school feel, parents are hopeless in their restrictive viewpoints and, often, just in the way their kids perceive almost all adults as being culturally out of touch. Those tensions certainly were most definitely played out in my own high school parental relationships.
Hubert, however, absurdly exaggerates those feelings regarding his mother, Chantale Lemming—presumably, Lemming being her maiden name to which she has returned after her husband, Hubert’s father and she divorced. Chantale (a wonderful Anne Dorval, who reminds me a great deal of the young Shirley MacLaine) is obviously bourgeois, their home (apparently filmed in Dolan’s real familial domicile) filled with bric-a-brac, while her life, when she isn’t busy working to support herself and Hubert, is consumed by trips with her friend on shopping excursions (during which she purchases clothing that is in outrageously bad taste) and to a local beauty shop to get “a complete redo”—in the latter of which she runs into Antonin’s far more hip mother (Patricia Tulasne) who accidentally reveals to Chantale that her son and Hubert have for some time been involved in a gay relationship.
Chantale seemingly has little difficulty in dealing with her son’s sexuality, but is deeply hurt that he has not dared to tell her. But, in fact, that is Hubert’s problem throughout this work, outwardly dismissing his mother for nearly everything, from her daily eating habits to the way she applies makeup in the car while driving him to school each morning. And after a while, the constant disapproval of her son turns into one long whine that dominates what are the more serious issues which the work later attempts to explore: his sexual awkwardness and his frustration for not being able to recover the joyfully beautiful mother he recalls from his childhood. 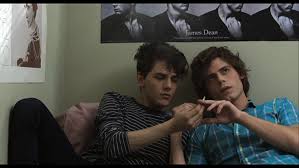 Even if we chalk up Hubert’s constant discomfort with his mother as part of what the character’s authorial voice is also mocking, it’s somewhat difficult to separate the two. And particularly, when most of the glimpses we have of Hubert is lying in bed with his lover while they smoke joints, we can only wonder at the sense of superiority this endless complainer seems to hint at. No, he does not go so far as to actually “kill” his mother, but spiritually he does, taping self-interviews as if being drilled by an unseen psychologist in which he memorializes his feelings: “Deep down I love her, but it’s not the love of a son.” Indeed, when assigned by a teacher to write about his parents, Hubert takes her aside to reveal that since he was a child he has seen his father only at holidays and that his mother has died, virtually assigning her to a coffin.
Naturally outranged when Chantale discovers from her son’s teacher what he has done, the battle between the two switches from his simple whining to an outright war. He determines to get an apartment of his own, to which she at first agrees but almost immediately after refuses to permit, insisting that he is simply too young. For a couple of days, pretending to be staying with his friend Antonin, he sleeps on his teacher’s couch.
An invitation by Hubert’s father for dinner further confuses the boy until both his parents his parents report, after conferring with each other, they now intend to send him to a Catholic boarding school in another town, perhaps the only apparent example of bad parenting we have seen in this film to date.
Now torn from his lover as well as from the routine of his previous school, Hubert discovers that even this stricter school, as Antonin has predicted, has plenty of gay and lesbian students, and temporarily he has a fling with a classmate named Éric (Niels Schneider), who invites him to join him at a night spot with other students where they openly kiss and take Speed.
In his heighted focus of perception, Hubert suddenly regrets having betrayed Antonin and escapes his new school via the Metro to return home, talking endlessly—which is what one does on Speed—while poignantly admitting to his mother “I love you. I’m telling you so you won’t forget.” We know it will be a short-lived sensation.
The next morning she drives him to Antonin’s home and they spend the morning painting the office, as described above, ending up in sex—the first time this movie has actually portrayed the boys’ love-making, a nice relief from the melodrama of the rest of the film. 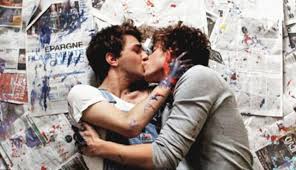 Back in his boarding school Hubert is attacked that evening by two of the school bullies. Confused, and feeling he has now completely lost touch with his past, Hubert disappears.
Chantelle—receiving a telephone call at her office from the school principal about Hubert’s escape—quickly discerning that the administration is more worried about the irregularity of her son’s behavior than actually worrying about his well-being—suddenly spews out a torrent of anger which we recognize she has long been holding within, particularly after the administrator suggests that, as a single parent, she may be unfit.
Her rage boils over as she catalogues the thousands of sacrifices she has made for the sake of her son, the hours she’s worked, the abuse she’s accepted in silence, and most importantly, the pride and admiration she still feels for her child, cutting off any further possible connections with a world she realizes will only attempt to replicate the sense of male privilege and exceptionalism the principal himself exudes. It is as if she has only now come to realize that the most remarkable thing is that she and her son have together come to be so extraordinary in their odd (we might say queer) differences.
Leaving her a clue to his whereabouts—Hubert has left a note stating that he can be found “In his kingdom”—she rushes to her former husband’s country cabin, the location of both her and Hubert’s joy during his childhood.
There, for the first time, she meets the legendary Antonin, acknowledging his love for her son, before the film, in a kind of breakdown into sentimental nostalgia infused with a yellow-colored lens, attempts to recover for the viewer her and Hubert’s loving past, the picture closing with a movie clip of Hubert the child playing by beach with his doting mother. 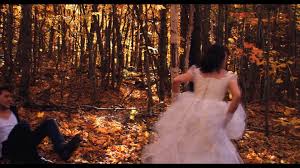 I can forgive Dolan’s Hallmark Card tribute to the much maligned and symbolically buried mother, but am a bit impatient by the whiny winding road it took to get there. Even Antonin describes the man he loves as being more than a little selfish. Does it really take an old-fashioned homophobic bashing to knock some sense into this boy genius’ head?


Posted by greenintegerblog at 11:59 AM