the heart of their terror

Belgian director Alain Berliner’s Ma Vie en Rose is billed as a comedy, which ultimately it becomes; but not before a great deal of social bigotry, confrontation, and ostracization along with domestic confusion, terror, and outright confoundment before arriving at that place. One might almost describe this as a kind of absurdist comedy except that in 1997, the date of this film’s French-language release, the issues it raises were still so fresh that the underlying assumptions upon which the perception of the absurd depends were not yet fully established. Even today there are many intelligent people who have difficulty in talking reasonably about some of the issues Berliner’s film raises. 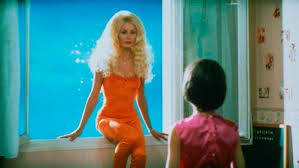 It’s not just that the Fabre’s youngest boy Ludovic (Georges Du Fresne), called “Ludo” by family members, has a cherubic-like ovalene face, wears his hair long as many a European family permitted throughout the 20th century—even while US fathers and barbers insisted their sons be subjected to flat tops and buzz cut—dances to the tunes of his favorite TV show Le Monde de Pam, starring the fantasy-like human doll Pam (who lives in a pink world and marries the man of her dreams), but regularly wears dresses and, when he is later told by his older sister Zoé about the basic biological facts of X and Y chromosomes that determines the sex of a child, declares that he is actually a girl who instead of the female XX chromosomes he was intended to get, received the XY after “my other X fell into the garbage.”

Ludovic’s mother Hanna (Michèle Laroque) puts on a brave face, believing in allowing the fantasies of childhood to be harmlessly played out, explaining "It's normal until 7. I read it in Marie-Claire.'' Ludo’s father Pierre (Jean-Philippe Écoffey) is not completely assured by her attitude, but as a loving husband allows his wife to raise the children as she sees best. Indeed, all might have gone well, but Ludo does not seem to be in any hurry to abandon his fantasies when the family moves into what appears to be the perfect suburban neighborhood which might almost remind us of Leonard Bernstein’s short operatic rendition of US suburbia in Trouble in Tahiti—a  backup quartet singing

Of the husband and wife;

Kindles their faces with greetings of love

In the little white house in Wellesley Hills.

Joy to your labors until you return

To the little white house in Highland Park

Not only is the suburban community friendly, but members share weekly neighborhood barbecues, which, of course, having just moved in, the Fabre family is now expected to host. They’ve invited their somewhat eccentric, certainly open-minded grandmother, Élisabeth (Hélène Vincent), their broodingly correct-thinking next door neighbor Albert (Daniel Hanssens)—who happens to be Pierre’s boss—and the entire force of fathers and mothers doting upon their seemingly rather bratty and selfish kids. Things appear to be going well until Ludo decides to show up in a frilly pink dress. 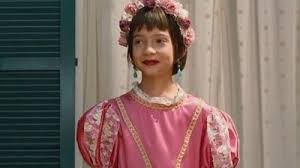 At first, the visiting parents are delighted seeing in the child a beautifully dressed and well-behaved young lady;  that is, until Pierre, in the midst of introducing his four children, pauses before continuing, “And this is Ludovic. The practical joker. He’s always doing things like that.”

So begins a long and slow decline in the newcomers’ stature in this perfect adult version of Pam’s world. But unlike the TV version of a children’s fantasy, the adult one hides many secrets.

When Ludo meets his fellow classmate Jérôme (Julien Rivière) it is love at first sight, the boy, who just happens to be Albert’s son, accepting Ludo almost the girl she demands she has always been. Even if the adults have not yet been able to assimilate the change in pronoun their children symbolically embrace it. 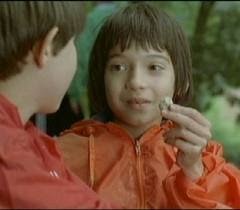 As friends, Jérôme invites his new girlfriend over to his house, carefully explaining that the room just before his had been his sister’s. Later the children break into the sacred room, kept intact from a time before the daughter’s unexplained absence not unlike Mrs. Danvers’ shrine for Rebecca in Alfred Hitchcock’s film. Discovering the child’s dresses, Ludo determines that she must dress up in the prettiest and pinkest of them for an unofficial wedding between herself and Jérôme, playacting a ceremony with the dead child’s teddy bear officiating, as “Pam” marries her “Ben.” It is a moving scene of childish wonderment; but parents in this film are always interrupting the fantasies of their children, and Albert’s more than dutiful wife Lisette (Laurence Bibot) discovering them as they are about to kiss, faints in horror over what she, and eventually the entire neighborhood, perceive as a perverted desecration of their sexual values.

The Fabres have no choice but to seek out psychological help for Ludo, which, given the girl’s insistence that she is female, has little result. She lamely attempts to play with the male-assigned toys, but it is as if the life has been drained from her. After Ludo, during the school production of Snow White locks the young girl who is playing that character in the bathroom and replaces her, awaiting the kiss of Jérôme she has previously been denied, the entire school district goes into crisis. Ludo is expelled and forced to attend another school which requires several hours of travel each morning and night.

When Pierre’s own job seems to be threatened even Hanna joins in the societal blaming her daughter.

Soon after, the child goes missing, found eventually in a freezer where she been hiding to await her frozen death. Realizing they will totally lose her if they continue, they allow her to wear a dress to a neighborhood birthday party. The next day Pierre is fired from his job and returns home drunk, with the terrified Ludo asking, “Is it my fault?” Pierre’s announcement to her that it is not, that people are “jerks,” and Hanna’s rejoinder, “I’m sick of all this hypocrisy” seems to suggest that Pierre and she no longer blame their child’s gender displacement to be the heart of the problem, yet at the very next moment she again turns against the child spitting out the horrible words: “Yes, it’s your fault. Everything is your fault,” almost as if suggesting what the hypocritical adults have determined is something she has no longer any power to deny. This is the way the normative patriarchal society works, blaming those innocent for their own fears and transferring the guilt upon those who attempt to salve those fears.

Sexuality, Hanna recognizes is at the heart of their terror. Almost as if to prove it, she appears at her neighbor Albert’s driveway the very moment he has put Jérôme in the front seat and is waving goodbye to Lisette on his way to drop off his son at school before driving himself work. Hanna greets him and plants a long, sensuous kiss upon his lips, gently stroking his hair.

The obedient and long-suffering Lisette, a product of her husband’s social and cultural inhibitions, has no choice but to believe that her husband has now been dishonest, having long desired Hanna and other women previously. In this contemporary Salem—or to contextualize it within French history, in the tradition of Margot de la Barre and Marion la Droiturière, women who were accused of causing impotence and desire in Marion’s former lover—has truly become a witch, or as Albert describes her “a devil.” 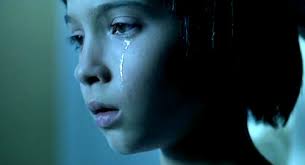 A day later they discover the words “Go Away Fruits” spray-painted on their garage door. The family itself has now become defined as “queer” simply for their son’s shift in the definition of her gender. This surely cannot be a comedy the audience must conclude. And as if in answer, soon after, while tears roll down Ludo’s eyes, her mother clips her hair to match the cut she has given her to “other” sons.

Is it any wonder that Ludo now wishes to live with her more accepting grandmother? When the two return for a family weekend reunion, however, Pierre announces that he has found another job in a town far away. And the Fabres once again pull up stakes and move on, as if attempting to put the past into the coffin where Snow White, never having received her kiss, likely died.

The new home, certainly more run-down and less suburban than their previous home, is also filled with friendly-seeming neighbors. Yet the new family keeps its distance and have ordered Ludo to never again behave in a manner that suggests his gender desires. Ludo nonetheless meets someone willing to be a friend, a tomboy (Chris Delvigne) forced to wear girl’s clothes and envious at Ludo’s male attire. Invited to a costume birthday celebration with her mother, the two are dressed by their parents in cis-gender attire, Ludo in a musketeer outfit and Chris costumed as a princess. Alone with Ludo, the tomboy conspires to switch costumes, to which Ludo reacts with both horror and desire, twice insisting, “No I can’t.” The stronger of the two, Chris physically enforces the switch as both return to the gathering of mothers, Ludo hanging behind.

When Hanna sees Chris wearing Ludo’s costume, she runs to find Ludo, who, as she begins to slap him hard, cries out “I didn’t do it. It wasn’t my fault,” a muted declaration that actually nothing ever was his fault. Yet Hanna, fearful of the past repeating itself, continues to beat the fairy princess. The mothers come running, pulling her away from Ludo, confused why such an innocent act as simply exchanging costumes has resulted in such a violent response.

This is, if you recall an adult fantasy as much as one for children, and now, as Hanna rushes to find Ludo to apologize for her behavior, she finds her missing. Running to a highway sign advertising “Le Monde de Pan,” into which she has previously seen Ludovic longingly staring, she is startled to find Ludo in the picture as well, running off with Pam. 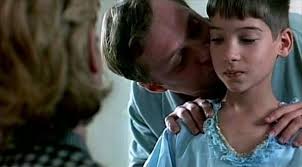 Awakening on the neighbor’s couch, she is confused to see the faces of her own husband among her neighbors peering down at her. Dr. Freud might have noted that she is the one who is now displaced—as a mother who fears she can no longer play that role for her beloved Ludovic; what is a mother who cannot accept and protect her own child? a question surely that Lisette has long asked of herself as well.

Wondering if it’s okay if she now wear dresses, both parents assure her that she may, clearly in acceptance of the transformation overwhelming their still beloved child.

Posted by greenintegerblog at 2:43 PM